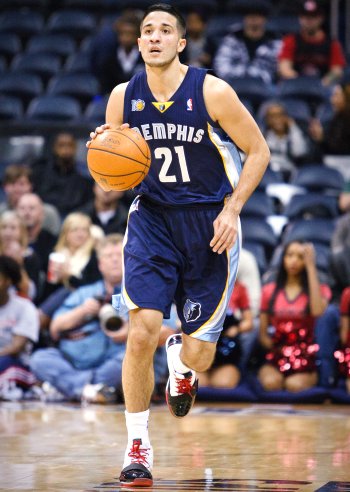 Grizzlies guard Greivis Vasquez will play this month with Venezuela at the FIBA Americas championship, which awards two spots for the London ’12 Olympic Games. Once the tournament is over, the 6-foot-5 playmaker will look at his options overseas. They should come aplenty after his nice postseason performance with Memphis.

Tell me about your summer so far.

Greivis Vasquez: It has been a productive summer. I’m working with my National Team and I’m going to play at the pre-Olympic tournament now. It’s going to be a tough tournament. We’ll see what happens. I’m heading to Argentina Wednesday to finish the preparation.

How close is Venezuela to Argentina, Brazil and Puerto Rico, who seem to be the strongest teams in the tournament?

GV: We’re a young team with a lot of new faces, but we’ve done a great work. Argentina is a very good team with players that have been together for a long time and that has given them very good results. Same with Brazil and Puerto Rico. We hope to have a good tournament and get to the Olympic Games and do well there. If we don’t finish in the Top 2, I think we can at least make next year’s pre-Olympic tournament by finishing in the Top 5. That’s the goal.

Do you feel the pressure to lead the team, considering you’re the only player there with a really high level?

GV: No, it’s healthy pressure. I’m happy about it. I’m nothing without my teammates. I’m not winning any game on my own. I need the help of my teammates and they need my help. We need to develop that chemistry since we’re a young team that has been together for just a while.

How was returning to Venezuela after the good season you had with the Grizzlies? I guess you’re kind of a superstar in the country now.

GV: It was extraordinary and beautiful. I thank God for this opportunity. I’m super happy and super proud about being Venezuelan. I cherish the opportunity to represent my country abroad and in the NBA. It’s not easy. Now the goal is to stay there.

Does the media bother you too much in Venezuela?

GV: No, I love it. I’m very outgoing and talk to everybody. With the media, I just have to be thankful for all the support they’ve given me and for following my career day-to-day. I’m grateful to them.

There has been a lot of political tension in Venezuela over the past few years. Is it a little better now?

GV: The political tension remains strong, but as an athlete I can only control the sports part. I think sports make people unite and the National Team make people come together no matter what their beliefs are. The soccer team did a great job and now it’s our turn to do our part and unite the country. As Venezuelans, we have to support each other. If we don’t support each other, who’s going to support us?

How is the country reacting to Hugo Chavez’s illness?

GV: Everybody is talking about it. Whatever happens, he’s the president of Venezuela. No matter what you believe in, you can’t have ill will towards anybody. I hope he gets better. I think he has cancer. It’s a serious disease, but you can recover from it.

I guess you’re happy with your individual performance and the team’s performance last season. Did you expect a year like that?

GV: I worked hard and still work hard and it’s not easy because it’s a very strong league and you have to be strong mentally. Basketball nowadays is 80 percent mental and 20 percent physical. If you don’t practice hard and don’t move forward and lose hope because you’re not playing, it’s very difficult. I had to wait seven months for my opportunity, which came in the postseason. I was ready because I had been working well. Coach gave me a chance and things went well for me. Now I’m hoping for the lockout to be resolved to have a good second season. We have high expectations for the team in Memphis.

It didn’t look like you were nervous when you faced high-pressure situations in the playoffs. Where does that attitude come from?

GV: It’s my culture. I have played in every neighborhood of Caracas and I’ve never been afraid of making mistakes. Something that defines me as a player and as a player is that I’m not afraid of failure. Thank God, my coach gave me a chance in the postseason and I took advantage of it. Obviously, I have a lot of room for improvement. In the NBA, you’re not who you are in your first saason. It’s what you do in your second and third year that defines what you’re going to be in the NBA. We have a very competitive team that can get to the playoffs every year. I’m getting ready and I want to improve.

What are your thoughts on the possibility of playing outside the U.S. if the lockout continues?

GV: I would love to play abroad. I want to look at the options I have. I want to have a sitdown with my agent once the tournament is over and mull my options. It’s not easy to play abroad, with a good contract and an out clause that would allow me to return to the NBA once the lockout is over. But yes, I’m very interested in playing overseas. I’d like to play in Spain, Europe, China, wherever I can… I love to play, I want to play and I want to keep learning.

Do you have a preference for any country in particular?

GV: No, I don’t have any preferences. I would like to play in the ACB (Spanish League), but I have no preferences. Any team that’s interested in me, I’m looking forward to discuss a contract with them.

Do you know if you have any firm offer on the table right now?

GV: I’ve heard rumors, but there’s nothing firm. I’m focused on the National Team as of now. I hope one of these days my agent calls me and say, ‘Look, this team wants you. What do you want to do?’ Then we can have something finalized.

If Marc Gasol re-signs with the Grizzlies, do you feel like Memphis is a candidate for the title?

GV: Yes. Marc Gasol is a very key player on our team. He’s one of the best centers in the league and will end up being the best center in the NBA in 2-3 years. He has very good chemistry with Zach Randolph. Besides, Marc is a leader. He didn’t miss a single practice all year long. And that’s commendable. He’s a model to follow. I hope he stays with us for a long time. Having a center like that on our team is going to give us a lot of hope. You can shoot for the Finals and be the champion. Why not? We have to go step by step. I hope the lockout ends and we can shoot for that goal.

Do you see yourself taking the starting spot away from Mike Conley next season?

GV: Nah, nah, nah. That’s not my mentality. My mentality is putting the best effort, get to training camp and work hard. I have to prove the coach that I’m better and that I know what he wants me to do. Anything can happen, but the truth is Mike Conley is our starter and he had an excellent season. With the roles we defined last year, we did very well. We almost got to the conference finals last year. Why can’t be get to the Finals this time?