The future Hall of Famers

The future Hall of Famers 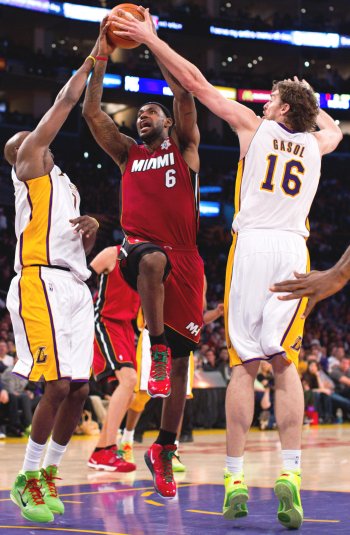 When Rashard Lewis tested positive for steroids and was suspended for the first 10 games of 2009-10, a cynic could have cracked that perhaps basketball would borrow from baseball and one day have a Hall of Fame steroid issue on its hands.

Yes, Lewis was a long shot for the Hall. But at least he was coming off a second All-Star season and had just helped Orlando to the NBA Finals.

Nobody, though, will have to worry about Lewis’ candidacy any longer. Since he’s returned from that suspension, he’s fallen off the edge of the earth and now has absolutely no chance to get into the Springfield shrine without visiting the ticket booth.

Debates might be easier regarding the basketball Hall than the baseball Hall because there isn’t a steroid issue. (In case you’re wondering, other NBA players to have tested positive for steroids include Don MacLean, Matt Geiger and Soumaila Samake. No doubt Samake never would have scored close to his 68 career NBA points without steroids). But there is one item baseball Hall arguments don’t have to deal with that basketball ones do. That would be a college career.

The NBA doesn’t have its own hall of fame, which it should. So NBA guys are grouped in with those from the international, women’s and college game.

That, though, sometimes can help a player. While Robin Ventura couldn’t tout his 58-game college hitting streak for Cooperstown, Grant Hill can throw on his resume his legendary Duke career, which included two NCAA titles, for Springfield admittance.

That’s one reason I expect to see Hill, one of the best players in the NBA in the late 1990s before ankle injuries struck him down, named to the Hall before the decade is done. Then again, if the Phoenix forward, 39 in October and coming off his highest-scoring season in four years, decides to keep playing well into his 40s, he might push the five-year waiting period to be eligible into the next decade.

As for Jermaine O’Neal, a six-time All-Star who most recently limped around with Boston, he has no college career to tout to help make up for his NBA freefall in his 30s. So you can forget about the much-battered O’Neal, who turns 33 in October but plays as if he’s even older than Hill, ever making it to Springfield.

With the class of 2011 being enshrined Friday and for the purpose of creating arguments, let’s take a look at how Hill, O’Neal and other top active players stand when it comes to their Hall chances.

I’m only considering those who entered the NBA with the star-studded draft of 2003 or earlier. And only those with at least three All-Star appearances will have their resumes eyed.

Sorry, Manu Ginobili. Make your third All-Star Game whenever there is again an NBA season and you’ll be considered. Shaquille O’Neal and Yao Ming won’t be looked at because they retired this summer. But Shaq is a no-brainer for induction and one has to think intangibles surrounding Yao’s arrival from China at least will get him in as a contributor. 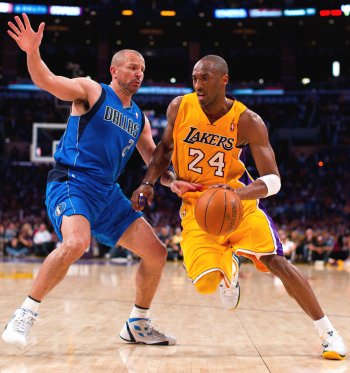 Kobe Bryant: The big question is how many rings will the Lakers guard arrive with in Springfield? He now has five. Two more and he’ll have one more than Michael Jordan and his fingers will be looking very Celtic-like.

Tim Duncan: Will The Big Fundamental, a man of few words, set the record for shortest induction speech? Actually, he doesn’t need to say anything. His career (four rings with San Antonio) says it all.

Kevin Garnett: The tough and surly KG figures to be one of the least likely inductees to cry during his speech. Then again, rugged Karl Malone couldn’t control his emotions at last year’s enshrinement.

Jason Kidd: If there were any doubts about Kidd being a lock, they were washed away when his Mavericks won the title last season. Since Kidd figures to get in before the next guy, he can serve as the presenter for that teammate (a presenter must be a Hall of Famer).

Dirk Nowitzki: He might get into some German halls first, if there’s not a five-year waiting period. But Nowitzki will be in Springfield the first year he’s eligible.

LeBron James: The Hall of Fame will be the easy part. As for getting his number retired by Cleveland, don’t count on that. At least not as long as Dan Gilbert owns the Cavaliers.

Dwyane Wade: He’s the only guy from that star-studded 2003 NBA draft with an All-Star appearance and a title ring. The other four guys with rings are Kendrick Perkins, Luke Walton, Matt Bonner and, of course, Darko Milicic.

Paul Pierce: It’s still hard to believe he slipped to the No. 10 pick in the 1998 draft, with the likes of Michael Olowokandi, Mike Bibby, Raef LaFrentz, Robert Traylor, Jason Williams and Larry Hughes going in front of him.

Ray Allen: If Allen ends up joining fellow Celtics Garnett and Pierce in the same class, the induction ceremony should be held on St. Patrick’s Day.

Steve Nash: We’ll finish the slam-dunk category with a guy who doesn’t dunk. Talk about coming out of nowhere. Nash wasn’t a serious candidate for the Hall when he signed with Phoenix in 2004 at the age of 30. Then came two straight MVPs. Considering every eligible player with one MVP is in the Hall, case closed.

FINGER ROLL IN THE LANE (looking great but don’t showboat and miss): 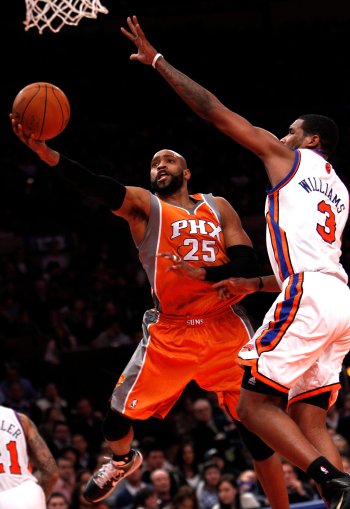 Vince Carter: For those who think Carter, an eight-time All-Star not exactly known for winning and a work ethic, could get snubbed, consider the case of Larry Foust. With eight, he’s the eligible player with the most career All-Star selections not enshrined. But you’ve got to figure Carter will get the call.

Grant Hill: How good was Hill once in the NBA? In his first six seasons with Detroit before getting hurt, he often was LeBron-like, having seasons in which he averaged as much as 25.8 points, 9.8 rebounds and 7.3 assists. Throw that in with a great college career and with just being a great guy and that will push Hill over the top.

Carmelo Anthony: Winning some playoff games would help considering Anthony is now 2-8 in series. But it’s hard to ignore his 24.8 NBA career scoring average. And he does have a NCAA title ring (remember that college counts).

Tracy McGrady: Actually, McGrady needs to stop unpolishing his resume. The more he plays, the more he hurts his Hall chances. After averaging 8.0 points over the past two seasons, his career average has plummeted to 20.4. Will it fall below 20? Still, with two scoring titles, you figure McGrady at least won’t fare any worse than Adrian Dantley, a two-time scoring champ who had to wait 17 years after his last game before being enshrined.

Tony Parker: The stats don’t blow you away (16.7 points, 5.7 assists per game in career) even if Parker’s speed can blow you away. But with three Spurs title rings it would be a surprise if he doesn’t eventually make it. He’s still just 29.

Amare Stoudemire: OK, he doesn’t rebound. But the pressure of playing in New York hasn’t messed with his scoring average in the slightest. After having joined the Knicks, Stoudemire averaged 25.3 points last season, the second-best mark in his nine-year career.

Pau Gasol: He might always be regarded as a supporting actor on the Lakers’ Hollywood stage. But that’s not all that bad. Scottie Pippen, Jordan’s sidekick, was inducted in his first year of eligibility.

Chris Bosh: Playing on mediocre Toronto outfits, Bosh was a regular 20-point guy. But somebody had to score. Now scoring less with Miami, Bosh might need multiple titles to eventually be enshrined. But isn’t that what the Heat is promising?

THREE-POINTER (must close career with a flourish, or hope history becomes a kind judge): 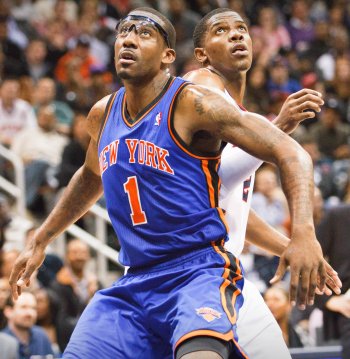 Joe Johnson: He’s got nice stats, but that sometimes doesn’t help when you’re a Hawk. Legendary Hawk Lou Hudson was a 20-point scorer reguarly in the 1960s and ‘70s but nobody has invited him to Springfield.

Shawn Marion: He’s got a title ring now with Dallas and has been able to bounce back after lean times in Toronto and Miami. But, at 33, his legs just have so many jumps left in them.

Chauncey Billups: It’d be great to see one of the NBA’s classiest guys get a Hall pass. But he simply waited too long to find his game. While he was Finals MVP with Detroit in 2004, he didn’t make the first of his five All-Star Games until he was 29. Now a Knick, Billups probably needs at least another All-Star appearance or another deep playoff run.

Ben Wallace: While you might say fellow defensive stalwart Dennis Rodman made it to the Hall playing one side of the ball, he dwarfed Wallace in rebounding average (13.1 to 10.0), rebound titles (seven to two), title rings (five to one) and even topped him in scoring (7.3 to 6.0). But Wallace, also a champion with Detroit in 2004, has at least doubled Rodman up with four trophies for Defensive Player of the Year.

Richard Hamilton: Once again, here’s a guy from the 2004 Pistons. Could they go down as the only championship team in NBA history not to have a single Hall of Famer? Dennis Johnson finally got the 1979 SuperSonics off the snide when he was named last year. But don’t count on Hamilton being the one to break through for Detroit.

Gilbert Arenas: Since his December 2009 gun antics, Arenas has had a better chance at an NRA hall of fame than one that has to do with the NBA.

Peja Stojakovic: We might have seen the last of Stojakovic in the NBA after an embarrassing Finals for Dallas in which he scored two points in 26 minutes. But it at least was good to see him fitted for a ring, helping erase the memories from his 2002 choke with Sacramento.

Jermaine O’Neal: O’Neal might not have minded a college stop on his way to the pros. He spent his first four NBA seasons averaging a paltry 3.9 points for Portland. O’Neal then had some fine years with Indiana, but he was an old man by the time he hit 30.