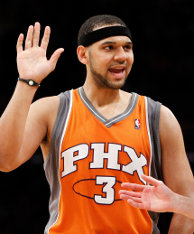 @twaynee: Why do you think some have predicted you will be one of the players that will come back overweight?

Jared Dudley: Well, when you look at my body type I’m not someone that has that natural genetics when it comes to NBA body types. So I have to stay consistent in my workouts and what I eat. If I don’t watch that, I could gain weight, especially with no basketball going on. I have not gained any weight so far. I’m actually at the same weight I was at the end of the season. I’m 225 right now. I don’t want to be less than 220 and not above 230, so 220-225 is my range.

@ajmil0: Have you been in touch with your teammates? If so, are you going to practice together like NFL teams did?

JD: I have been in touch with Grant Hill and I went to Steve Nash‘s soccer charity game in New York. I saw Marcin Gortat, Grant and Steve. I saw Josh Childress at the Players’ Association meeting we had in New York before we met with the owners. I saw Vince Carter in Miami… I’m keeping contact mostly through Twitter with a lot of my teammates. But I don’t think we’d be practicing like NFL, because NFL has more like playbooks that they look at. Basketball is more about staying in shape. Right now I’m Vegas training. I don’t think there’s any place right now that has more players and more training than what’s going on here.

@ByrdDaFLi1: Biggest reason why you would or wouldn’t go overseas during the lockout?

JD: Biggest reason I wouldn’t go overseas is if I don’t get an NBA out clause. If Spain, Israel or Russia offered me a fair deal and said, ‘Hey, we give you an NBA out’, which means once the NBA season starts you’re allowed to go back, then I would go there. The only reason why I would not go over there is if the team doesn’t give me an NBA out clause to let me return. If they wanted me to stay with the team all year even with the lockout over, then I wouldn’t go.

There was an offer where I would go and play in some Euro basketball league. If the team made it to the Euroleague, I would get a bonus… There were a couple of teams they were talking to, but I would go anywhere if I had an NBA out clause. I would go tomorrow. I don’t have a deadline. And I’m reasonable. It doesn’t have to be million over million, just a fair offer.

JD: Yes. He led the NBA in assists this year. He’s the only player I think in NBA history to shoot 90 percent from the free-throw line, 50 percent from the field and 40 percent from the three. He did that I think like three of the last six years. Offensively, he’s the most efficient point guard. Athletically, he’s not where Russell Westbrook, Derrick Rose or maybe Chris Paul are at, but offensively he’s the best passer and the best shooter, so he’s in my Top 5.

@dahking: Personal feelings aside… If you owned the Suns, would you trade Steve Nash?

@therealmark33: Who was your favorite teammate to play with?

@dan_elder: Do you feel like Steve Nash has helped your career flourish?

JD: Yeah, he definitely helped my game. For me to be able to go out there and knock down shots, show the coaches I can do that and let me have the opportunity to show people what I can do, Steve was a big influence on that. I helped myself working on my game, but Steve helped me raise my game each year, so I’m expecting this year to have my best season and I expect Steve to be a huge part of it with me.

@FrancisMcCarthy: Who would be the first player you’d pick for an NBA franchise?

JD: I would pick LeBron. I know he hasn’t won a championship. But he’s 26, a freak athlete, has size and power… He’s been to the Finals twice. He’s lost both times, but I would start with him over Kevin Durant and Rose. Kobe is older. Dwyane Wade is a little bit older and has more injury problems… So I would go with LeBron.

@stanthomas: Why did you say LeBron James was going to the Knicks last summer?

JD: I had a source inside basically saying that it was down to the Knicks or the Heat. That he was going to go there. But I think once Chris Bosh decided to go to Miami, he just saw the opportunity too good to pass up. I think that he wasn’t sure at first, and then once he knew Bosh was going to go down there and he would take less money, that was kind of a too good of a deal to pass up.

@jeremylebescont: Which part of you game would you want to improve the most ?

JD: I would say ballhandling and shooting off the dribble. The more you can show to Phoenix Suns’ coach Alvin Gentry, the better. Obviously I’ve shown I can shoot the NBA three, I can play good defense… Now I have to show the development of my game I’ve working on this summer: coming off screens and shooting, pick-and-rolls and my post-up game.

@Dbirds23: If you could play another sport, what would it be?

JD: I would play baseball. They sign eight, nine-year deals. They play a lot longer, the season is longer, they have the best players’ union… There’s guaranteed money, as opposed to football. For me it’s baseball.