I’m writing this revision of Tex Winter’s acceptance speech at the Basketball Hall of Fame last week, not as a criticism of Tex’s son, Chris Winter, who struggled and rambled in his speech.

Tex, as you may know, suffered a stroke in late 2009, just before the NBA playoffs and has been unable to speak for himself. If I make it into my late 80s, I just hope I have a son like Chris Winter and a loving family to provide the care that Tex has received.

Chris Winter clearly struggled with what he wanted to say in that extremely intimidating circumstance. So what? It happens to all of us. The important thing is that he is such a dedicated son.

But those of us who know and love Tex have felt the need to offer assistance in addressing a career that has touched literally thousands of people – coaches, players, owners, media, fans – across basketball.

Clarence Gaines, Jr., the basketball executive and scout who worked for years with Tex and the Chicago Bulls, felt compelled to go to his Twitter account to offer his special perspective.

“His mind was as sharp as a tack,” Gaines wrote. “I would have loved to hear Tex’s speech, because he knew and coached against so many greats.”

From my many conversations with Tex over the years, I know he would have had so many to thank. The real challenge would have been knowing where to begin.

He was quite proud of his coaching work over six decades, and I know he was profoundly thankful for the many coaching influences, especially his coach at Southern Cal, the great Sam Barry, who first introduced him to the triangle concepts.

Barry produced three Hall of Fame coaches from those who played on his teams in the 1940s, including Bill Sharman and Alex Hannum, which says much about his gift to Tex.

However, before I get too deeply into coaching, I have to pause and focus on Tex’s relationship with so many players. I would advise Tex’s family to begin by thanking Elvin Hayes of the Houston Rockets. Tex was hired during the 1971 offseason to coach the Rockets, his first move to the pros from years of big success as a college coach.

Hayes rejected bitterly Tex’s efforts to implement the triangle offense, and Tex responded with numerous complaints about Hayes’ lack of fundamentals. The Rockets traded Hayes after the 1971-72 season, and Tex was replaced a year later.

The experience provided his first painful lesson in the immense difficulty of blending his disciplined, ball-sharing system with the scoring machine persona of an NBA superstar.

Fifteen years later, when Bulls executive Jerry Krause brought Tex on board as an assistant and a consultant, he would be awed by the immense athleticism, quickness and strength of a young Michael Jordan, so much so that Tex confessed to being intimidated by the athletic force he encountered and even reluctant to approach him.

This, of course, only emphasizes the great gift of Jordan’s presence in Winter’s career. Jordan was a superstar with a boundless work ethic and a perfectionist nature to match Winter’s own gnarly insistence on only the best.

Likewise, Scottie Pippen was blessed with similar gifts that made him an ideal force to play alongside Jordan. Both men were eminently coachable, with an intelligence and fierceness to match that of Tex. 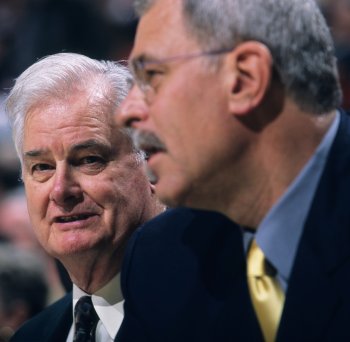 That they did accept Tex’s triangle offense, the immaculate system of play (that he had built from Sam Barry’s offense at Southern Cal), serves in turn to highlight Phil Jackson’s extraordinary ability to relate to Jordan and to sell him on the triangle approach.

Jackson’s many attributes and his own willingness to devote his brilliance to Tex’s basketball system are other gigantic factors for which Tex is eternally grateful. He often talked in awe of Jackson’s abilities to make his system all come together in a meaningful way for the elite NBA players he coached, from Jordan, Pippen and Dennis Rodman to Kobe Bryant and Shaquille O’Neal and Pau Gasol.

All of them found their way in Winter’s world of drills and fundamentals, ignited by Jordan’s and Pippen’s zeal at spending important time daily working on Tex’s passing, dribbling, and footwork drills that so many players on every level view as beneath them.

Clarence Gaines recalls Pippen and Jordan talking in the days after they were teammates with Clyde Drexler on Team USA in 1992.

“Pip said this to MJ on the team bus after they had been on the Dream team,” Gaines recalled. “If Clyde Drexler had Tex Winter as a coach, he could be on the level of Michael Jordan. Bottom line, Clyde was not a fundamentally sound player.”

Of course, Tex was about far more than the superstars. He worked with teams in Chicago and Los Angeles that were filled with brilliant role players imbued with a similar work ethic, people like Derek Fisher, Ron Harper, Brian Shaw and many, many others.

Tex was immensely grateful to these men for their efforts and character and intelligence.

His appreciation for the assembled talent left Tex holding the highest regard for the owners who stretched far beyond the mean, Jerry Reinsdorf in Chicago and Jerry Buss in Los Angeles, to acquire tremendous talent for Jackson’s coaching staff to work with. Likewise, he was quite mindful that those same owners shelled out substantial dollars to make him the highest paid assistant in the NBA, an extraordinary commitment in itself.

“They’ve paid me a fabulous salary,” Tex told me more than once.

The efforts of the owners were guided and shaped by a group of executives with tremendous vision, Jerry West and Mitch Kupchak and his old college teammate Bill Sharman, in Los Angeles.

In Chicago, the executive role was of a different order with perhaps the most bittersweet plot line in modern sports history. Jerry Krause was an unusual figure for pro basketball, a short, heavy man who had spent years hustling across the North American landscape in an unending search for talent. In those travels, Krause encountered two wonders, a young forward named Phil Jackson playing for Division II North Dakota, and a veteran college coach named Tex Winter.

When Reinsdorf placed Krause in charge of the Bulls in 1985, his first thoughts were to combine Winter and Jackson in a coaching team. At the time, no one in pro basketball had even the slightest interest in Jackson or Winter, but Krause was obsessed with the idea. Eventually, Krause was able to bring them together, and the result was six championships in Chicago for Jordan’s team.

There is no question that Tex’s partnership with Phil was the most productive in all of basketball.

“Tex’s relationship with PJ deepened over the years,” Clarence Gaines observed. “Many times you would look in the film room and it would be just PJ and Tex breaking down the film. Part of Phil Jackson’s greatness is that he not only is a great teacher and thinker, but he is a great student and listener. Tex was the architect of the triangle, but PJ put his stamp on it and within a few years had mastered the nuances of how to teach the offense.”

Sadly, it ended in bitter division in Chicago with the brusque Krause having alienated Jackson, Jordan, Pippen among others. The fault perhaps was not Krause’s alone, but by 1998 even Tex had wearied of the effort to keep all the parties working together.

Perhaps the greatest reward for Tex was witnessing that his Hall of Fame election and induction had served to begin the easing of immensely hard feelings left from Chicago. At his request, Krause and Jackson shook hands last week.

During the playoffs, Pippen indicated to me that he would have no problem visiting with Krause, that the hard feelings no longer seemed that important. Whether Jordan, known for harboring hard feelings for years that feed his competitiveness, will be able to make the same concessions remains to be seen.

Certainly, Krause deserves to join them in the Hall of Fame for his vision and efforts.

The bottom line is that together this group of men accomplished great things, and they did so with a team that was both disciplined and unbending in its desire to win. The teams they built belong to all of them, players, coaches, executives, staff. And for those relationships I know Tex considered himself the luckiest man in the world.

He was simply the pure, fiery spirit at the center of it all, humble yet fierce, comical even in his intensity. All of us who were blessed by his friendship and direction are burdened by a debt we can never repay.

As Dennis Rodman said last week, Tex has done so much for so many people in pro basketball.

Tex will be the first to tell you that those people have all done immense things for him in return, beginning with his players and assistant coaches at Kansas State, where he began his coaching career as a young assistant to the great Jack Gardner, and continuing through Marquette, Washington, Northwestern and Long Beach State (where he had the joy of coaching Craig Hodges).

Dean Smith tells a story of being a high school athlete recruited by a young assistant named Tex Winter at Kansas State. When Smith came to the campus for a visit, Tex took him to the swimming pool and entertained him with his trick dives off the high board. Winter was a world-class pole vaulter by the way and quite capable of commanding attention with his daring. It was a humorous scene, one that Smith treasured, and something that no other assistant coach would think of attempting, then or now.

From my perspective, however, it was telling in that Tex always operated at great heights, where he was absolutely fearless, whether he was upbraiding Jordan for imperfect chest passes or fussing at Shaquille O’Neal about rebounding and defense.

What a great six decades Tex Winter enjoyed coaching the game, an experience for which he was boundlessly thankful.

The greatest and most important thanks I’ve save for last, and that was his beloved Nancy, who from my perspective seemed the perfect coach’s wife, able and willing to tolerate that he was so deeply lost in a love affair with the greatest game.

God Bless you, Tex, and God bless Chris, Nancy and the rest of your wonderful family. Welcome to the Hall of Fame. You’ve given us one heck of a trip.