Brandon Jennings: "Nothing really fazes me"

Brandon Jennings: "Nothing really fazes me" 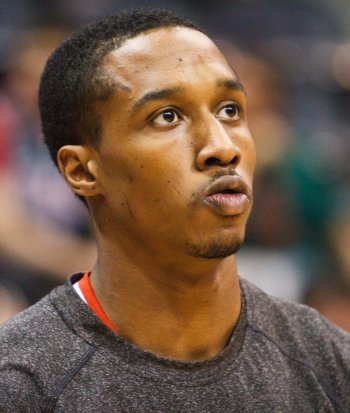 Bucks guard Brandon Jennings spoke with HoopsHype from his desk at the Under Armour facility, the place where he’s working out this summer in preparation for next season – if there’s one.

You mentioned last year that you were a little frustrated that you didn’t get a tryout with Team USA and that your affiliation with Under Armour could have played a role in that. Do you still feel the same way?

Have you heard from USA Basketball lately?

BJ: No, I haven’t heard from anybody.

But I guess you would still like to play for the U.S. team.

BJ: Oh yeah, of course. Who wouldn’t want to play for his country?

I have seen a little of the Under Armour campaign – the commercial, you wearing the Nobody Likes Snakes t-shirt… Why is the campaign that aggressive?

BJ: That was just for fun. Of course everybody is going to take it out of proportion because they want something to write about and something negative to say, but they’re wrong. I think Kobe Bryant is the best player in the NBA. We took it as a joking thing, but of course everybody else is going to take it differently. I don’t care what anybody else has to say about it. It was just a joke.

You look a little stronger now. Was that your main focus this offseason – gaining strength?

BJ: Yeah, the main thing was coming to Baltimore and staying away from a lot distractions and being focused on the things that I needed to do, which was getting stronger and work on my game, get back to the basics. I think these last two months I’ve been here have been great to me.

You’ve done a little boxing too. Tell me about that.

BJ: The boxing is more for my endurance. I’m not trying to get in the ring with anybody or anything like that. I’m just trying to do things that will help me when I’m on the court. The boxing will help me to not get tired as much as I used to when I’m playing.

I guess you must have a bitter taste in your mouth about the way things went last season.

BJ: Yes, but a lot of it had to do with injuries. I hope we stay healthy this year if we have a season. I hope [Andrew] Bogut will come back healthy because he’s a big part of our team.

You were critical of the some of the moves the Bucks made last summer. Which one hurt the team the most, in your opinion?

BJ: I don’t think any of them really hurt. It was more that we just couldn’t get our chemistry going. The injuries kind of messed the chemistry.

Where do you rank yourself among point guards in the NBA today?

BJ: I don’t rank myself at all. I’m just happy to be one of the 30 starting point guards in the NBA. That’s just a blessing right there.

What do you make of all these NBA players signing overseas?

BJ: The game never stops. But I don’t think they have all the info. The way players live overseas is different from here. We don’t fly private overseas, we have a roommate, we eat together… Hopefully they know playing overseas is not like the NBA. And it’s all about winning at the end of the day. If you don’t win, they don’t care.

What are your best memories of your time in Italy?

BJ: Being able to travel to different countries and seeing the world. At the time, I was 18. It was a blessing. How many people at 18 are able to do that – travel around the world playing basketball?

How did that experience change you as a person?

BJ: It helped me mature faster, just being outside home every day and living the life of a professional. Going over there, I had to grow pretty fast because I was around adults. I think it helped me mature a whole lot.

And what about your coaches there? What are your memories about them?

BJ: My first coach, (Jasmin) Repesa, was a great coach and he was really hard on me. He didn’t make it easy for me. But I think everything he put me through and everything he told me actually helped me in the NBA. Nothing really fazes me and I can handle pressure.