LeBron James: "The week after losing the Finals was the worst I ever had"

LeBron James: "The week after losing the Finals was the worst I ever had" 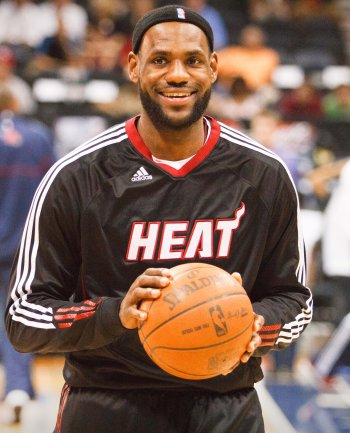 How’s the relationship with Erik Spoelstra compared to the one you had with Mike Brown in Cleveland?

LeBron James: I think it’s different right now because I had five years to develop it (with Brown). Me and Mike Brown went to so many playoff series, so many days together… I had five years with Mike Brown. That was my first year with Spo and I believe our relationship is going to continue to grow.

How did it change from the beginning of the season to the NBA Finals?

LJ: Just the trust factor. It’s always difficult playing for a new coach, learning his philosophies, him trying to learn you as a player… It’s the same with playing with new teammates – having a new coach. But it definitely grew from the first day of training camp till the last game that we lost in the NBA Finals.

How did the media coverage that you got this season, which was pretty negative, affect the performance of the team?

LJ: For the most part we accomplished a lot of things that we wanted to accomplish. We didn’t accomplish our ultimate goal and that is to win the NBA championship, but for a team to come together for the first year, and get through what we got, and to do some of the things what we did with all the scrutiny and media coverage that we had throughout the season, I think it was a successful season.

How was the week following the defeat at the Finals?

LJ: It was the worst week I ever had. I hate losing.

What did you do?

LJ: I did nothing. Nothing at all.

You have been working with Hakeem Olajuwon this summer. How was that experience and why is the focus on improving your post-up game this summer?

LJ: I’m trying to improve every part of my game and that was an opportunity for me to improve my game. I’m very happy with it and can’t wait to put it in play.

When you think about Cleveland, what comes to mind?

LJ: Passionate. Passionate fans who love their sports. Love the Indians, love the Browns, love the Cavaliers… And I have a lot of respect for them.

Do you want to get involved in basketball decisions? Maybe talk to Pat Riley about additions to the team?

LJ: I think Pat Riley is a great president, great GM for our team. He’s going t do whatever it takes to help us win if that means bringing in guys. He’s going to do what is best for the team.

How’s been your relationship with Michael Jordan since you entered the league? Do you talk? Does he give you any advice?

How’s living in Miami as opposed to living in Cleveland?

LJ: It’s different because it was the first time I’ve ever lived anywhere besides Ohio in my life. It didn’t matter where I was going, if it was somewhere different than Ohio it was going to be a challenge for me. It took a little while to get used to but I’m very comfortable down there now. I know the city, I know the streets, I know where to go or not to go, but it’s fun.

Did you spend any time in Akron during the offseason?

LJ: Yeah, that’s where I live. I spend all my time there during the offseason.

And how it’s the relationship with fans there after you left?

I guess there’s a big difference in the way fans treat you between Akron and Cleveland.

LJ: I don’t know. I mean I think it’s a difference for me but I’m always home, I spend all my time in Akron, I’m always there in the offseason. You know, I show my face, so it’s not a big deal. 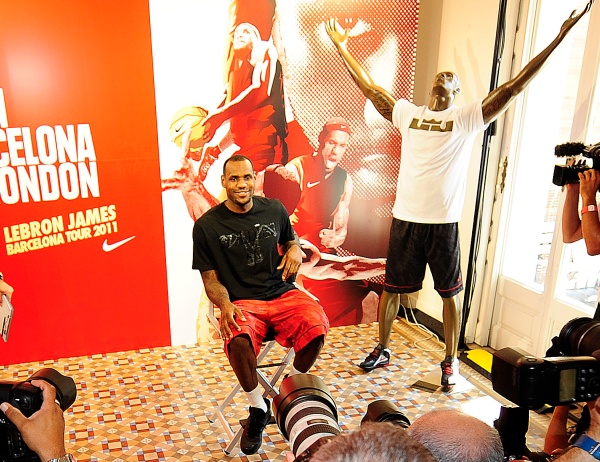 What about the Olympics next year? You don’t want to commit yet?

LJ: I’m committed. I can’t wait for it – to have an opportunity to go to London and defend our gold medal from Beijing. It’s going to be great. I’ve always loved the Olympics just to be around the athletes from all over the world. Not only in my country but to see all of the athletes, it’s so fun… I have a great deal respect for all other athletes that are competing as well.

How would you compare the Beijing team to the Dream Team?

LJ: They were bigger than us. They had David Robinson, Patrick Ewing and Charles Barkley… They had some bigger guys. We may be a little faster with the speed that we have. I think both teams were very competitive, both teams wanted to win and that’s what it’s about.

I guess the experience in Beijing was much more enjoyable than the previous Olympic Games… What happened in Athens ’04? The team was pretty good too.

LJ: I think we didn’t have enough time to come together. The ’08 team made a three-year commitment. Every summer we got together for that time. The ’04 team was kind of just put together and I don’t think that we became a team fast enough for that.

You played with Dwyane Wade and Chris Bosh at the Olympics. Would you three be together in Miami now if you hadn’t gone through that experience together before?

LJ: I don’t know. It’s hard to say, but it definitely helped. Playing with those guys at the Olympics and seeing how great teammates they were and how much they cared about winning made the decision a lot easier.

You obviously took a lot of heat about the decision to leave Cleveland and go to Miami. What did it mean to you to have the support of most NBA players?

LJ: It means a lot to be respected and have respect from your peers. When you go out on the basketball court, you want to have the respect of them. Some of the decisions you take, you love to hear the support from them as well. I’m really thankful.

A lot of players have talked about potentially playing overseas during the lockout but you haven’t. Why is that?

LJ: I’m just focused on getting better. Right now, I’m very optimistic that there will be an NBA season. As that time comes around, whether or whether not there is a season, no one knows at this point. Until the end, I’m preparing forward and I’m looking forward to it.

How involved are you in the negotiations?

LJ: I wish I could be more involved personally, but one my friends, Chris Paul, is on the board, my teammate James Jones is also on the board, so they are there at every meeting and they update on everything that’s going on. I wish I could be there more but I have a busy schedule, I can’t be there as much as I want to but they give me enough insight info to know what’s going on.

Did you think you have a real shot at winning the MVP last season?

LJ: Just the thing I did. The change from Cleveland to Miami wasn’t going to allow me to win the MVP.

LJ: No matter. It didn’t matter.

What about next season?

LJ: I got a chance. But they made me take a year off.

You have obviously lost some popularity among some NBA fans. Does it hurt you in any way?

LJ: At the end of the day I can only try to be the best basketball player I can be, and be happy with that. My friends and family and the people who know me, they know the type of guy I am. For me, that’s the most important thing.

If you win the ring this season, is it going to be bigger for you than winning the gold medal at the Olympics?

LJ: It’s a goal of mine. The Olympics in ’08, to win that gold medal was a huge step for my career and for our team and hopefully I can win an NBA championship and then win another gold medal.