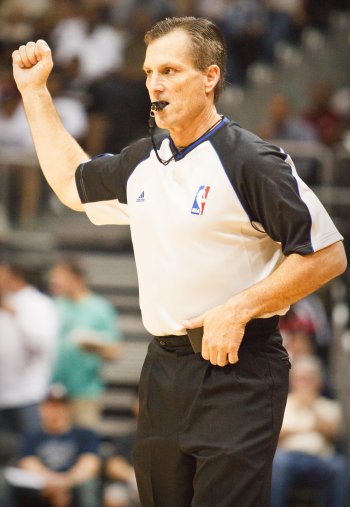 Let’s suppose for a second that the NBA and its players each experience the proverbial ‘Come to Jesus’ moment in the next week or so and agree on a new Collective Bargaining Agreement. The 2011-12 season would then start on time, right?

Well, yes, it would. But it also could well start with plenty of unfamiliar faces on the floor. That’s because a big part of the NBA “game presentation” as David Stern likes to call it is, at present, also without a contract for next season.

That would be the 60 NBA referees.

In a ‘here we go again,’ situation, the referees’ CBA with the league expired eight days ago (on Sept. 1.) While the league says the two sides are still talking – there has been nothing for public consumption from the referees’ side for months – there is no deal and another lockout is possible.

If you are scratching your head over this one, here’s why: we went through this two years ago with the officials. Their contract expired on Sept. 1, 2009. They continued to negotiate into mid-September. On Sept. 18, the league announced it was locking out the referees and replacement officials were used for the exhibition season.

The two sides finally settled more than a month after the lockout was imposed and the regular referees were back on the floor to start the 2010-11 season. The referees agreed to a two-year deal – most of the previous deals had been for five years – in hopes that the economy might pick up and they’d have a better CBA in 2011.

They still might. But as of now, there is no schedule for the traditional September training camp that the officials have a week or so before the start of the exhibition season. Then again, until there is a 2010-11 season, or an exhibition season, that is a moot point.

The referees have a new lead negotiater in Lee Seham, a Westchester County (N.Y.) based employment attorney. He replaced Lamell McMorris, who had categorized Stern’s behavior in the last labor negotiations as “unprofessional” and “disrespectful,” according to the New York Times.

Seham, who did not respond to an email seeking comment for this story, has been anything but a shrinking violet to date. He filed two complaints with the National Labor Relations Board, one of which was withdrawn. One of the complaints dealt with what he said was the NBA’s failure to negotiate in good faith “over such issues as discrimination, or the league’s attempt to terminate a referee without cause,” according to an e-mail to Yahoo! Sports last March.

That was Seham’s last known public comment on the negotiations.

As far as the league goes, NBA spokesman Tim Frank said, “We are still working on a deal, but have nothing to update yet.”

While the league and players are hoping to avoid a lockout that would cost them games for the second time in the last 13 years, the referees have much more of a ‘been there, done that’ mindset. As mentioned earlier, they were locked out two years ago and missed the exhibition season. Many are still around from the last lockout in the mid 1990s.

There were two other occasions in the last 30 years where the referees were without a contract and unable to officiate regular season games. In 1983, their agreement expired in September. A month later, at a protest at Madison Square Garden, the officials were asked to leave the building. They then handed whistles to fans entering the World’s Most Famous Arena. That dispute ended in December thanks in part to the intervention of the Federal Mediation and Conciliation Service.

The league also locked out the officials in September 1995 over a “no strike” clause in the new, proposed CBA. The referees agreed to the league’s offer in December.

There also was a strike by NBA officials in April of 1977 during the playoffs.

In none of those prior instances, however, were the players locked out this late into the summer. In 1995, there was a lockout of the players over the summer, but the two sides reached agreement on a new CBA in August and the players ratified it in September, so they were able to start training camp on time.

With no agreement yet with the players, clearly, the referees’ issue belongs in the “back burner” category. But without a contract, the referees face the same uncertainties as the players going forward. And no one is talking about their plight.

Eventually, of course, it will all get settled. The great unknown is “when?” There’s no need for referees if there are no games. But once the games begin, will the players see the same, familiar faces on the floor, or will they be dealing with replacement officials?