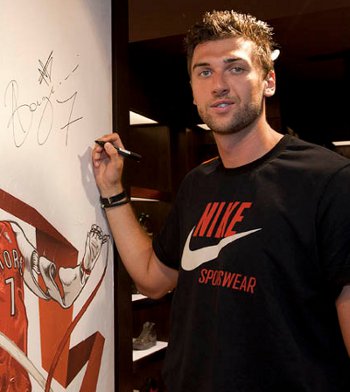 Well, I expected this blog to last longer, but as you all know by now my team, Italy, was eliminated early in the Eurobasket, so this will be my final entry here.

I’m now taking a small break after the disappointment that was the tournament for me and my teammates. I know there were a lot of expectations about the Italian National Team, but it just didn’t go our way in Lithuania. We were in a tough group and lost a lot of close games and had to go home.

Anyway, I have to say some people in the media set outlandish expectations for us. I really didn’t think we had much of a chance to fight for the medals at the Eurobasket. I was more realistic. My goal was to get to the second round and see what happened there.

Yes, we had talent, but it’s not only about having talent and NBA players on the team. There’s much more to it. It was a young team that lacked experience and had not been together for a lot of time. For example: I had insurance issues and Danilo Gallinari got hurt. It’s not easy to develop the chemistry that is needed to win when things like that happen.

I’m watching some of the games at the Eurobasket and I have to say Spain and Russia have looked pretty terrific. If you ask me for a favorite, I have to go with everybody’s pick: Spain. They are so good.

Not sure yet what’s going to happen in the next few weeks. It’s all going to depend on if there’s a training camp. Right now it doesn’t look like it, but it could change in a couple of days. Who knows? I’m going to keep practicing. I can’t say much about those rumors that European teams want to sign me. First we have to see if there’s no NBA season, then we’d have to get past some issues that could arise. I have four years left in my contract with the Raptors and I don’t want to take risks.

That’s all for me, guys. Thanks for reading. A presto!