TweetBag: On Adelman and Argentina

TweetBag: On Adelman and Argentina 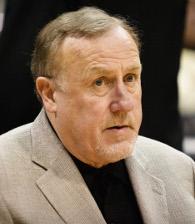 Q: Adelman’s hire means he likes Rubio’s potential or just that the money was right? Those are the only two possibilites. – @softyelectric

A: The itch to coach makes a lot of guys convince themselves that the situation they are getting into is not as bad as it looks and that they are capable of turning it around. I think that’s the main thing with Rick Adelman. And who knows? Maybe he’s right. He has a very good track record of making teams overachieve. Just loot at the Rockets last year. But probably he’s reaching here. Minnesota is one of the worst franchises you can get involved with right now. The management is not good and the roster’s upside is overrated, in my opinion. They have banked part of their future on Ricky Rubio, who is really struggling. Rubio’s confidence in his jumper is shot and that affects his whole game. It’s sad to say, but he was probably a better player when he was drafted than he’s today.

Q: If Scola hadn’t been traded, would the Spurs have one more title? – @yowhatupT

A: Before 2007, I’m not sure. After 2007, I don’t think so. The Spurs certainly blew it when they traded the rights to Luis Scola, but it’s not like they’ve been close to winning the championship lately. By the way, the fact that a player of the caliber of Scola didn’t come to the NBA earlier because he was kind of held hostage by San Antonio doesn’t speak very well about how draft rights work. Teams shouldn’t hold the rights to players forever if they’re not going to use them. We could have enjoyed Scola in the NBA for many more seasons if not for that.

Q: Is Argentina’s basketball team the best ever in all of sports in the country? – @SayPHHAT

A: Argentina’s basketball team has been terrific for the last decade and if you factor in consistency as the main thing, then you could have a point that this is Argentina’s best team in all of sports ever. The issue with successful basketball national teams is that for the most part they don’t compete against the best players in the world. Most of them are in the U.S. and for much of the last decade, especially when Argentina peaked, the top American players were not with Team USA or not taking FIBA competitions seriously enough. Argentina didn’t beat the best of the best to win the gold medal at the ’04 Olympics. With soccer, you have to defeat top competition to become the champion. Winning the World Cup in soccer is a bigger accomplishment than winning the gold medal at the Olympics in my book. I have to go with Maradona‘s team in the ’86 World Cup as the best Argentinean team ever.

Q: Who do you see the Bulls going after once the lockout is done? – @Vedo89

A: Chicago needs a scoring guard to take some pressure off Derrick Rose, but one that doesn’t take away from the defensive personality of the team. I don’t think there’s anyone that fits the mold in free agency this year. The Bulls would probably be better served waiting for an opportunity in the trade market. It’s not a bad thing if they start the season with what they have right now. They won 62 games with those players.

You can send more questions for the TweetBag @hoopshype. Don’t forget to use the #hhtweetbag hashtag.