Rudy Fernandez: "I've proved I can be a tough defender"

Rudy Fernandez: "I've proved I can be a tough defender" 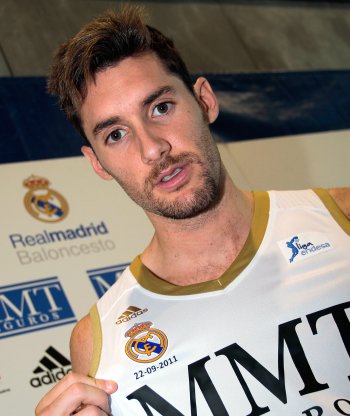 What was the key in order to sign with Real Madrid?

Rudy Fernandez: The biggest reason was the interest of the club. They were willing to take a risk with the lockout, but that shows how big their interest was.

How do you stay focused playing with Real Madrid when down the road, sooner or later, you are going to Dallas to play with the Mavericks for the rest of the season?

Rudy Fernandez: Actually it’s been difficult because although I’m here in Madrid, I’m also thinking about Dallas. Let’s see if the lockout ends because it’s a very good opportunity for me to have the chance to play in one of the best teams in the world. But the lockout is a reality and here I have the chance to play all competitions and keep improving as a player. I want to play and that’s going to be a good thing when if I have to go back to the U.S.

Real supporters have to understand that you have signed with the team, but you still have a contract with Dallas.

Rudy Fernandez: For what I’m hearing a lot of Real fans understand that I’m also excited about playing with Dallas. I know it’s difficult for them because they have signed a player that can be very important in years to come, but they understand that my future is in Dallas too.

So your priority will be doing your best with the Mavs and make yourself an important player in the rotation.

If you succeed, it’s very possible that the Mavs or any other NBA team will pursue you when you become a restricted free agent…

Rudy Fernandez: Of course. I’ve been lucky after being traded to a team where my game fits their style. I’m very lucky by the chance to learn from players like Jason Terry, DeShawn Stevenson if they finally re-sign him… Fighting to earn minutes would be good because that’s when players do their best. Right now I’m playing with Real Madrid and I will try to do my best as long as I’m here.

Have you been in contact with anyone in Dallas?

Rudy Fernandez: I haven’t because of the lockout, but I have talked with Nowitzki and they are excited. I’m very happy that the club made an effort to get me on draft day.

Jason Terry said recently that he wants the Mavs to re-sign Stevenson because of his defensive efforts during the last postseason and he kind of raised some questions about your defense.

Rudy Fernandez: I totally agree with Terry. He’s got a lot of experience in the NBA, he is a key player for the Mavs and Stevenson played great during the playoffs. And as Terry said, he can defend great players. But I think I’ve proved that I can play defense and be a tough defender – not only playing with the Blazers but also with the Spanish National Team, guarding small forwards taller than me.

The Mavs have six free agents, some of them key players like Tyson Chandler, and it’s possible that the lockout could hurt their chances to defend the title.

Rudy Fernandez: There’s a lot of free agents, but that’s the thing about the lockout – they can’t even talk to them. But I hope that when the lockout ends, the team will finally have a roster as good as last year.

Do you think you will be more comfortable playing for coach Rick Carlisle than with Nate McMillan?

Rudy Fernandez: [Smiles] Well, I don’t know coach Carlisle, but when you watch them play and when they played against Miami in the playoffs, you can see that they are a team that can play very good basketball, move the ball very well. And when you have players like Nowitzki and Jason Kidd, everything is easier.

Why did you change agents?

Rudy Fernandez: I was not in contact very often with Andy Miller. My agents in Spain handled my day-to-day stuff. I was very happy with Gerard Darnes, Jordi Vila, Nuria Martinez. They were very important for me during my career. But I felt I needed something else… Then there was the issue with the fines, which I didn’t like… Also some other things happened that I didn’t like. Also in order to change my image I needed this. Now I’m with Arn Tellem, Jose Ortiz and David Carro. Pau [Gasol] and Marc [Gasol] said very good things about Tellem and I’m happy about this change.

Do you regret any decisions you made in the past? Maybe requesting a trade?

Rudy Fernandez: All young players are ambitious and so am I. And I’m very straightforward too [smiles]. When I’m not comfortable, you can tell – not just by my face, but also by how I play.