TweetBag: Miami has the brightest future

TweetBag: Miami has the brightest future 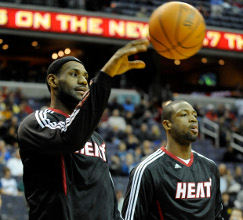 Q: Which organization has the best five-year outlook? – @italbio

A: It has to be the Heat. They are in win-now mode, but the future looks just as bright as the present. Miami was two wins away from winning the title with the members of the Big Three learning to play with each other and a weak supporting cast. The chemistry between the three stars is going to improve and the players around them should get better too. Miami has very good management and players like the city. Even with a CBA that hurts their ability to get valuable pieces, the Heat will find a way to land talented guys that can contribute as role players.

Q: Can you see Bo McCalebb doing any good in NBA? – @velikov

A: Sure. Very often we focus too much on what a player can’t do. What I’m pretty confident he could do in the NBA is bring a spark off the bench and score. Could be a like a smaller Bobby Jackson in the league. It’s hard not to root for McCalebb. He’s been obviously underappreciated by NBA types, has paid his dues in Europe and should get a good contract in the NBA whenever he chooses to play in the States.

Q: When will Al Jefferson have a breakout season? – @mmm9731

A: At one point in the NBA, you are what you are. I don’t think we should be expecting a breakout year from Al Jefferson after seven seasons in the league. He’s what he is: A very good offensive player and a very bad defensive player. He has enough low-post skills to be a go-to guy offensively, but lacks the elite athleticism and motor that most stars possess. His conditioning has rarely been where it should be, but all in all Jefferson is still a Top 50 player in the NBA. I just don’t believe he’s ever going to be a bona fide star in the league.

Q: Should the Pacers look for a good trade for Granger and try to develop Paul George? – @_penitenciagite

A: Paul George was a pleasant surprise last season, but was he that good that you have to consider trading your best player? Sometimes fans fail to appreciate the good they have and start looking for the next big thing. George should be pretty good in years to come, but I would keep Granger around at least a little longer and see if they can work together. Besides, Granger’s trade value is not that high right now. He has developed some bad habits after making the All-Star Game. Shot selection could be greatly improved. But I can see him bouncing back.

Q: How do you see Valanciunas panning out at the NBA level? – @the_REAL_alexb

A: Feels like a star in the making to me. He has great size, skill and athleticism. Plus you can see he really cares, which is often a missing ingredient with talented centers. He just needs more experience and strength, but that’s going to come with time. Looks like Toronto made a great pick. I have a hunch Cleveland is going to regret passing on him twice in the draft.

You can send more questions for the TweetBag @hoopshype. Don’t forget to use the #hhtweetbag hashtag.