Trevor Ariza: "The Lakers overlooked how I helped them win the title"

Trevor Ariza: "The Lakers overlooked how I helped them win the title" 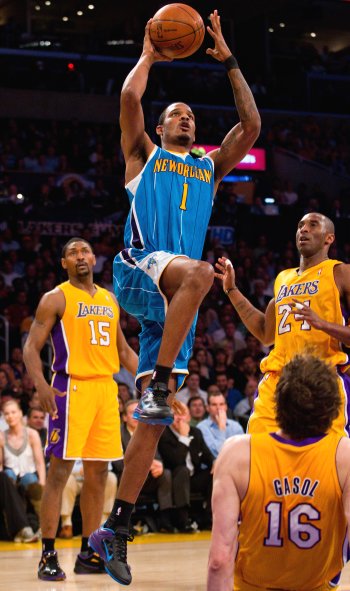 Hornets swingman Trevor Ariza has used the time off this summer to take some classes at UCLA, which he left for the NBA after his freshman year. He talked with HoopsHype about that, his season playing with Chris Paul in New Orleans and the bitter ending to his tenure with the Lakers.

What made you want to go back to college this summer?

Trevor Ariza: First of all, I had a lot of time. You know with the lockout, that obviously freed up a little bit of time for me. So I thought I might as well go to school and try to finish up some of these credits so I can move closer to a degree.

What classes did you take?

TA: I took a History class this summer.

How seriously did you take your education before going to the NBA?

TA: When you’re young, you don’t understand the value of education as well as you do when you’re a little bit older. I wasn’t too much concerned with the educational part, but looking back on it now I think that the education is just as important as the sport.

Do you plan on doing this again in upcoming summers?

TA: I definitely plan on doing it every summer and I’m actually thinking about going to class during the fall.

I don’t know if you saw this list they are making at ESPN.com… They are ranking all NBA players. You are at No. 113. What do you have to say about that?

TA: That’s just some person’s opinion. I know what I do. I know every team I’ve played on has gotten better. My whole life, nothing has ever been given to me. That’s another reason to go out and work even harder. It’s cool or whatever to be ranked, but I don’t look too deeply into that kind of stuff.

You have been traded several times during your career. Which of those trades disappointed you the most?

TA: The most disappointing trade that I had is when I got traded from Houston to New Orleans. But as far as throughout my whole career, when the Lakers did not re-sign me that was kind of disappointing as well.

TA: I was disappointed because I felt like… This is my hometown, Los Angeles, we had just won a championship. Me helping win that championship… They overlooked that. I didn’t hang my head or cry about it. I just went to the gym and try to do the best for the team that I would play for the following season.

Would you want to return to the Lakers one day or after that experience you don’t want that?

You have been with five teams in your seven years in the NBA. Does it make you a little cynical about how the NBA works?

TA: Well, as a player you can’t control where you play. As a player, all you can really do is play your best. If that is not good enough for one team, I’m sure another team will appreciate your game.

You talked about becoming an All-Star when you got traded to New Orleans. Is that still a goal of yours?

TA: Of course, that’s always been a goal of mine – to be the best player that I can be. Everything that my team has ever asked me to do, I tried my best to do. Maybe I fall short on my personal goals, but I’ve always been a player who tried to do what’s best for the team instead of what’s better for myself. And that’s what helps a lot of teams win, when you have a player that’s not selfish and doesn’t care about his own personal stats as much instead of what is happening with the team.

TA: Of course, that definitely hurts you. Stats is what makes All-Star players. But if I never reach that goal, I’m fine with that as long as our team always does well and always wins and always gets to the playoffs. I’m perfectly fine with that. 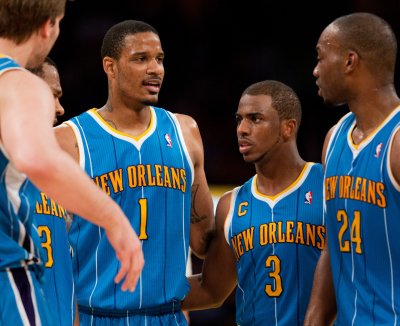 You went from playing with Aaron Brooks at the point guard position in Houston to Chris Paul in New Orleans. How was that change for you?

Do you think Chris Paul is going to stay in New Orleans after this season?

TA: That’s not something I can even comment on because he’s his own individual. He’s been in New Orleans his whole career, but that’s a decision that’s up to him and his family and what he feels is best for him.

How was the chemistry on the team last year compared to other teams where you have played?

TA: We had a really good chemistry. We had eight new players on our team, a first-year coach who did an unbelievable job… I think we did well.

You have played for the Lakers, who are the biggest team in town, and then the Rockets and Hornets, who are not. Do you miss the attention you got as a player in L.A. as a Laker?

TA: I’ve never been one of those players who really cared too much about attention. Yeah, everybody wants to play on TV, you want to play on TV since you are young. Playing on TV, yeah, I miss that, but as far as attention… I never was one to seek out attention or anything like that. So no, not really.

Was losing in the first round of the playoffs tougher for you because it was against the Lakers?

TA: Losing is tough. I hate losing. I would’ve been mad if we had lost to Dallas or anybody else. I don’t think losing to the Lakers made it any tougher than losing to anybody else.

Your shooting percentages have not been very good the last couple of years. What’s happening there?

TA: Well, more attempts now. My shooting percentages were always up because I took less shots. I didn’t really have to worry about shooting the ball as much. But during the offseason, I’m working to make myself better. I’m trying to bring my shooting percentages up. I also know that when I am on the court my team gets better, our efficiency ratings go up as well. My percentages go down, but my teams do well.

You’re the father of two little kids. Fatherhood changes you as a person, but does it change you as a player too?

TA: I’m definitely more mature. I look at things differently. I think I have more patience now as a player.

Have you given consideration to the possibility of playing overseas?

TA: To be honest with you, I would like to play in a big European city. I would like to see what that experience is like. But like I said, I keep my opportunities open. I would listen to any team and what they have to say. Right now, I’m just working out, staying in shape and spending a lot of time with my family.

The Dominican Republic is going to play at the Olympic qualifying tournament next year. There are several NBA players on that team and you have Dominican roots. Is there any chance that you could join the team?

TA: If they would want me to play, I’d definitely listen and I would definitely be open to playing.

They have not approached you about this so far?

TA: A little bit, nothing too serious. But since it’s pretty close and they will try to qualify, I believe they will be more serious now.