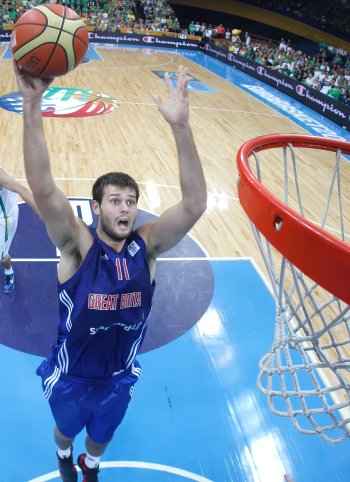 Blazers draftee Joel Freeland is still dreaming about the NBA, but remains unsure on when the dream will come true. The British forward, who averaged 11.2 ppg and 5.8 rpg at the Eurobasket, says he had good communication with Portland throughout last season, which makes him confident the team is really interested in him.

“(The NBA) is a goal of mine, but I’m still going to weigh my options,” Freeland told HoopsHype. “We’ll see what happens next year. The NBA is definitely a place where I want to be. If I feel like I’m 100 percent ready and I’ve got the opportunity to make the step, I’ll make the step. If not, I’ll continue doing what I’m doing.

“(The Blazers) came over to see me maybe four, five times. We had some dinners, some meetings and everything. Overall it was good. I haven’t had much of communication lately because of the lockout. I know they are keeping an eye on me and they got me in mind, so we’ll see what happens.”

Freeland has become one of the centerpieces of Spanish powerhouse Unicaja, a team he led in scoring in the Euroleague in 2010-11. The Brit big man knows his role would be much different in the NBA, though.

“Going to a place like that, I have to start from scratch and build my way up,” Freeland said. “I’ll have to go there and prove myself as a player, so I’m going to have to do things that other players don’t really want to do: rebound, play defense… And this is a big factor, this is why I’m here now trying to improve my defense and all these other things, like rebounding.”

The British National Team team was eliminated in the first round of the Eurobasket last month despite the efforts of Luol Deng and Freeland. They should be a force to be reckoned with next year at the Olympics, though, with the potential addition of Pops Mensah-Bonsu and Ben Gordon. Freeland is still not counting on the presence of the Pistons guard at this point.

“He said a few times that he was coming, but there’s nothing you can do about that,” Freeland said. “He just had a kid this summer, so hopefully he’ll play because he’s going be huge for us. We really need a player like him on the team.”