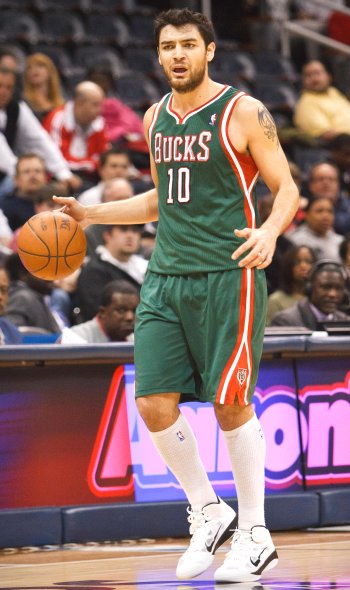 Argentinean swingman Carlos Delfino went through his most difficult season as a pro basketball player last year. Aside from the many losses in Milwaukee, Delfino had to deal with a concussion that sidelined him for almost three months and made him wonder if he would ever be the same again. There were many moments filled with anxiety in those days in which he could do little aside from sleeping and staring at the ceiling of his house. He now looks back at those times as a learning experience and also looks forward to playing again soon – whether in the NBA or Europe.

Unlike his teammate Ersan Ilyasova, who signed with Anadolu Efes and told the Turkish media he’d rather stay there, Delfino says he’s first and foremost committed to the Bucks, a team he’s grateful to for the way in which he was treated while injured, and is only now starting to pursue overseas options.

“I’m itching to play and compete. I was confident there would be a solution (to the lockout) that would allow me to return to the States and play. But the way things are right now, I probably need to seriously look at my options elsewhere because, quite probably, we may not have any other option.

“There were talks with teams, but it’s all pretty dead now. After speaking with Siena, we have not received any other offer. There’s not a lot of movement right now. I’m going to ask my agent to see what’s out there. Teams like Siena intrigue me because they are ambitious teams, but we’ll see what happens in the next few days. If I sign a contract, it would have to be one with an NBA out. My wish is to stay with the Bucks. They made me feel wanted and have really taken care of me. I can only be grateful to them.”

Delfino admits he’s been caught by surprise by the length of the lockout and says he never expected games would be lost. Although interested in possibilities that may arise in Europe, he’s a little wary after his last stint overseas. That was three years ago, when Delfino signed with Khimki Moscow at a time where Russian clubs where dominating the European market and attracting big names from the NBA. What he went through in Russia wasn’t an NBA-type experience, though.

“I didn’t feel comfortable. The toughest part is when you have to think about things other than basketball. You think about whether you’re going to get paid or not, how the trips are going to be… In the NBA, you don’t have to think about it. In Europe, there are clubs where those things are not taken care of. In Khimki, I was with a big team with a big budget, but you didn’t know if they were going to pay you. That’s a distraction and it makes you uncomfortable. In the NBA, you get used to not having to think about stuff like that. That’s why I decided to go to Milwaukee and sign for a smaller amount of money compared to what I was making in Europe.

“I never took basketball as a job until I played in Russia. It didn’t feel right, so I decided to go where I felt the most comfortable… And that’s the NBA.” 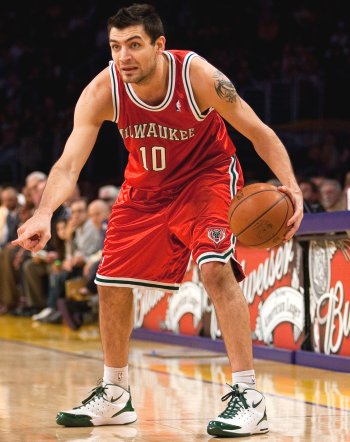 Delfino’s NBA career has been nice if not stellar. His scoring and playing time have improved every season since he entered the league in 2004 with then-defending champion Detroit, and this year the Argentine ended up with a 11.5 ppg average.

His best season, though, took place in 2009-10, when he was a key component to the success of a Milwaukee team that advanced to the playoffs for the first time in four years.

There were high expectations for the Bucks and Delfino last season, but it all took a bad turn for him early in the season when he started experiencing dizziness after suffering a concussion and taking two hits to the ear and cheekbone within a week.

What followed were more than two and a half months of recovery. According to 6-foot-6 swingman, it was one of the toughest moments in his life. It was mentally challenging and plain boring.

“I couldn’t read a book, use the computer, watch TV or have a conversation because I would have terrible headaches. I just stared at the ceiling, but that also gave me headaches because you start thinking too much.

“My wife’s dog, Bongo, helped me a lot. I taught the dog to do stuff when I was finally able to leave the house. It had to be at night because the daylight bothered me. I would walk him around near the house. The dog was kind of my reference those days.”

Delfino says his mindset has changed a lot following this whole health ordeal.

“I now feel blessed for all things. I’m like a kid learning to ride a bike. I feel blessed that I’m able to do what I like the most. At one point, I didn’t know if I would be able to do it again. Sometimes in life you’re worried about minor stuff and going through this I realized I almost lost what’s so important to me – at 28. What do you do with the rest of your life? What do you do to feel valuable and important? You realize you need to get your stuff together outside of basketball. So you pay more attention to your family, your investments, your eating habits and on and on.”

Delfino was finally able to play in 49 regular-season games and finished third in the league in three-point shot attempts. He averaged 5.8 per game up from 5.5 the year before.

He was equally trigger happy from beyond the arc last month at the FIBA Americas tournament, which Argentina hosted and won, earning a spot in the Olympic basketball tournament in London 2012. Delfino was the youngest player on the 2004 Olympic champion team – only the second gold medal for Argentina in any sport in 52 years – and remains one of the youngest on the squad to this day at 29. While old, the South Americans are expected to contend for a medal if Manu Ginobili, Luis Scola, Andres Nocioni and Delfino are at full force in London.

“On paper, we have to be near the upper echelon of teams – where the U.S., Spain and France are. I’m not saying we’re there, but we’re close. We’re experienced and in international competitions many try to avoid playing Argentina. We’ve had a certain aura and a great group for the last 10 years. We’re shooting for a medal.”