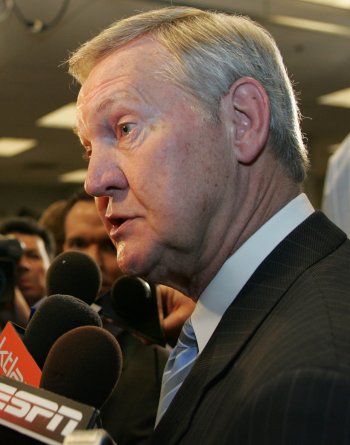 We can all believe, and sympathize with, Jerry West’s recent revelations of being abused by his father and of being haunted throughout his career by a lack of confidence. Nobody lies about such deeply held personal grievances.

However, West’s recollections of being dissed by Phil Jackson immediately upon PJ’s arrival in Los Angeles are erroneous.

In truth, West’s vehement dislike of Jackson was publicly manifest even before PJ signed on as the Lakers coach. After spending his post-Bulls season traveling, Jackson was bombarded with offers to take charge of various other NBA teams. One persistent rumor in that summer of 1999 was that Jerry Buss was very interested in hiring Jackson.

Why would West react so strongly to the possibility of working with Jackson? There are several reasons:

The Lakers and the Knicks were not exactly friendly rivals during West’s and Jackson’s respective playing careers. In particular, West hadn’t been appreciative of Jackson’s aggressive elbows.

Moreover, the Knicks had minimal respect for West’s game simply because Walt Frazier could be depended upon to eat Mr. Clutch’s lunch. When the Lakers finally did beat New York to cop the championship in 1972, West was downright awful. The Knicks believed that the crippling injury to Dave DeBusschere was more detrimental to their chances of winning than anything that West might or (mostly) might not do.

To a man, the Knicks were not convinced that West was the clutch shooter he was reputed to be. Said Jackson, “Fans and sportswriters forget the numerous times that West missed clutch shots, and only remember the few that he made.”

After Jackson joined the Lakers, West had more negatives to chew on. Whereas Jackson’s initial deal included $30 million over five years, West was upset that he was paid less than a million per annum. Hey, wasn’t he Mister Laker? As well as the Logo-Man?

Also, since West had been part of the organization ever since the Lakers relocated from Minneapolis in 1960 (as All-Star player, then as coach, consultant, and general manager), he felt he deserved to be given a piece of the team. After all, Magic Johnson didn’t arrive in La-La Land until 1979 and Buss had presented him with a part-ownership deal soon after his retirement.

Speaking of Magic, for lo these many years West has taken (and been universally granted) the credit for drafting Magic out of Michigan State. This momentous decision has been the cornerstone of West’s claim to administrative genius.

The fact of the matter is that West was determined to use the Lakers’ fist pick (which was also the NBA’s first overall) to draft not Magic, but Sidney Moncrief. It was only after prolonged hours of being convinced otherwise by both Bill Sharman and Chick Hearn that West finally yielded and selected Magic.

West has likewise taken credit for building the Magic-Jabbar–Worthy dynasty, when it was Sharman who did most of the planning,

Did both Shaq and Kobe come to L.A. during West’s watch? Certainly, but here again, others pulled the strings – various combinations of lawyers and businessmen, and in O’Neal’s case, Dale Brown.

Meanwhile, Jackson was universally hailed as the latest savior, and West was still a hired hand. 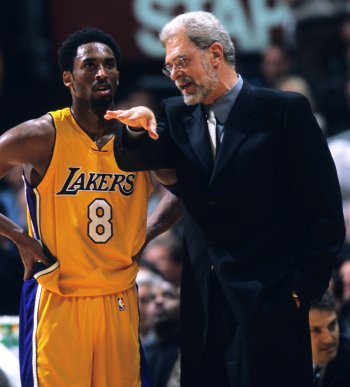 The very first inkling of West’s bias against Jackson that I personally witnessed occurred just before the Lakers initial preseason practice session in October 1999. As a long time friend of Jackson’s and casual acquaintance of West’s, I felt obliged to offer West a small warning: “Phil’s teams always start off slowly while they’re learning the triangle.”

West’s sour response was this: “He’s got six weeks.”

Turned out that after six weeks, the Lakers were 31-6 and West’s resentment grew. His most wished-for scenario was for the Lakers to collapse and for Buss to beg him to save the team. When West’s dream turned into a nightmare, he began to actively undermine Jackson.

He leaked word to friendly local media that Jackson was a do-nothing coach, that the triangle was bogus, ands that Kobe was being underutilized. With West as the conduit, the hitherto fore secret news of Jackson’s relationship with Jeannie Buss was fed to scandal-hungry rumor mongers in Chicago.

And so it went: West overpaid draft picks to reduce the funds available for free agents; failed to provide the backup big man the Lakers needed; then spread an absurd rumor that Kobe was going to sue Jackson for defamation of character.

Not even L.A.’s three-peat silenced West. One local sportswriter took his cue from West and branded Jackson’s initial three seasons in Tinsel Town as “a failed experiment.”

So, if Jackson did indeed fail to curry West’s favor, he had every right to do so.

NOTE – Because Jackson always accepts personal responsibility for what he says and does, I want to emphasize that I relied on other sources than him for all of the above information.