Michael Beasley: "The lockout has been a blessing in disguise for me"

Michael Beasley: "The lockout has been a blessing in disguise for me" 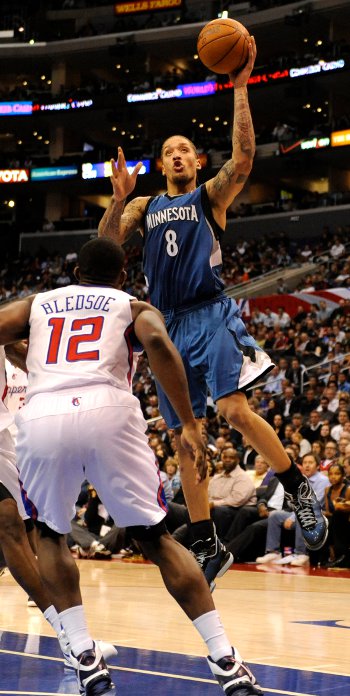 So how is your offseason going?

Michael Beasley: It’s good. Well, actually pretty slow. I was supposed to be in a basketball court right now, you know, in training camp… But other than that, just working out.

Can you tell us a little more about the game you’re playing Friday night at Osseo High School to benefit the Michael Beasley Foundation?

MB: Just wanted to bring some basketball to Minnesota. Me and a number of other guys. Bring something to our hometown fans. Wesley Johnson, Derrick Williams, DeMarcus Cousins, Daequan Cook, Keith Bogans, Dorell Wright, Sam Young…

There’s some talent there.

Well, there was no agreement Thursday night between the league and the union.

MB: Yeah, it’s kind of disappointing that they haven’t reached an agreement yet, but I feel very confident, and I know it in my heart, that both parts will come to a mutual agreement in the near future.

So do you feel optimistic even though the mediation led by George Cohen failed.

MB: First thing is believing, and I really believe that the lockout is going to end very soon. The players… We just want to play basketball. But the ones that are really suffering are the fans, so I really hope and believe that we’re going to come to common grounds pretty soon, just for the fans’ sake.

But if the lockout lingers, have you thought about playing overseas?

MB: Well, I haven’t thought too much about it, but playing overseas is definitely an option. But like I said, I really believe that the lockout is gooing to end so I don’t want to jump the gun.

Do you have any kind of deadline to change your opinion on the matter?

MB: I don’t have any deadlines. Actually this lockout, although it’s obviously a burden, has been kind of a blessing in disguise for me because it has given me extra time for being a father.

Are you enjoying it?

MB: It’s fun! A little hard at times but I have the funniest kids in the world.

Last year you told us that sometimes your mistakes have been magnified. This summer you had two issues: the police found 16 grams of marijuana in your car and you shoved a fan in the face during an exhibition game with players like Kevin Durant on the court. Being now a father, what do you think about those issues that happened during the summer?

You trained with Norm Nixon in Los Angeles. How was that experience?

MB: He’s a legend. He’s won multiple championships, perennial All-Star… and he has been through a lot at the highest level. So who better than him to teach you things like that. I’ve learned how to be a complete floor general, how to control different situations… But Norm is not just somebody I worked out with. I really look him as a father figure. So just being with him every day… Actually he’s in Minnesota right now in my house as we speak. The things that he’s learned, the things that he’s been through… It’s a blessing for me. He played with some of the greatest players in NBA history so I really take every bit of advice he gives to me. We’ve watched a lot of old film… He has been a very big part of my life this summer.

When the season starts, you will be the highest paid player on the Wolves’ roster. How does it make you feel?

MB: As far as being the highest paid player, I don’t really think about it, but as far as being a leader, it’s something that I’m trying to work on. With Kevin Love, Wes Johnson, the new guys like Derrick Williams, the new head coach… I’m really looking forward to hitting the court, because I really feel that with the talent we have we can be playoff bound in the near future.

Kevin Love is already an All-Star. Is that a goal for you next season? And can you define your relationship with Love?

MB: As far as being an All-Star, everybody would love to be one, but as far as me I just wanna win first. The more wins we have, the more All-Star recognition I get. So I’m gonna do everything I have to do for the team in order for us to get better. As far as me and Kevin, we’re best friends. We hang out every day, when we’re not in town we text each other… He’s actually one of the funniest guys I know.

He said you’re kind of an eccentric guy.

The Wolves are deep in the frontcourt this year.

MB: Of course I want to play 40 minutes, but it’s up to the coach to decide. They are all very good players and hard workers.

Do you see yourself playing more at the three spot next season?

MB: I really don’t think about positions, I think about being on the basketball court and helping my team to win.

There were a lot of expectations when you were drafted by the Miami Heat. How do you think Ricky Rubio will deal with all the expectations about his performance during his rookie year?

MB: Ricky is going to do great. He came to Minnesota for a week and we hung out together, we played… He’s a great person and a great talent. If he just doesn’t try to overdo, he’ll be fine.

What do you expect from Rick Adelman?

MB: From what I know about him, he’s a players’ coach. He’s a hard worker and he’s really enthusiastic about his job. Those three ingredients along with the talent that we have, there’s no reason we shouldn’t prevail and get better as the season goes on.