Brian Scalabrine: "The guys that have played with me respect what I do a lot"

Brian Scalabrine: "The guys that have played with me respect what I do a lot" 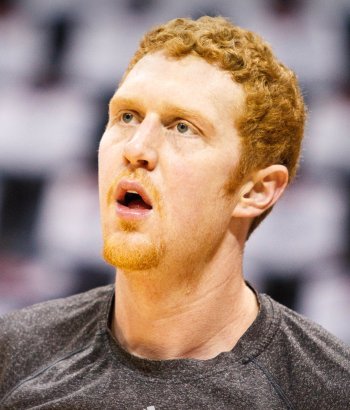 How has been the Italian experience so far?

Brian Scalabrine: It has been good. I loved the idea of playing European basketball. The last couple of years in the league, if you’re not playing in games you’re getting your workout on your own, but not getting as much five-on-five. So it’s been really good for me to finally go back to playing a lot and those type of things. I’ve been enjoying it. At first, it was tough to get adjusted to Italian basketball but I enjoy the international game, which is something I’ve been always looking forward to.

Did you finally get the Italian passport or are you playing there as an American?

BS: No, I’m playing as an American, but we’re still working on it. We’re having trouble locating the documents of my great grandmother. It’s hard to find that.

BS: Maybe they can relate to me. I’m a normal guy. I’m not one of those guys that are incredibly gifted athletically, but I work hard and I love the game and I think they can see that. Fans are here to watch us play, win and they want to be entertained. I try to do that the best I can, as well as trying to win the game… But also making sure they have a good time when they are here, especially after the games, giving high-fives and stuff like that.

You’ve been a role player in the NBA. How does it feel to have a bigger role playing with Benetton Treviso?

BS: The funny thing about that is that I’m doing the same thing I did in the NBA, the only difference is that I have more minutes. If you watch my games, I still rely on my teammates to create shots for me. I’m still a role player, using the system, using my teammates to help me get my shots and get a little advantage against my defenders. A lot of people would probably say like, “You didn’t play that much in the NBA.” But I’d say to them “Hey listen, I’m behind guys who are going to the Hall of Fame. I’m behind power forwards that make hundreds and hundreds of million of dollars.” Quite honestly, Kevin Garnett, Kenyon Martin are better than me. Carlos Boozer, Joakim Noah, they are better than me. Now I’m having the opportunity to play and I’ve been really enjoying that.

Have you ever felt disrespected as an NBA player by people that don’t appreciate your qualities?

BS: It starts and ends with my teammates and my coaches. I’ve always been respected. You can ask any of my teammates or my coaches – they all respect me. If other people don’t like me, that has no impact on what I’m going to do. My teammates and my coaches, those are the people that matter to me when I’m on the court or the bench. Believe me, if you talk to any of the guys who I’ve played with, they will all tell you they respect the stuff that I do a lot.

What happens if the lockout comes to an end next week? Would you consider going back to the States?

BS: I have no plans. I don’t look at things like that. l take it day-by-day. When the situation comes, I’ll address the situation. I have other factors involved too. It’s what I have to do, it’s what my family has to do, it’s what teams are thinking. I have no contract over there (in the United States)… I’m living right now like I’m going to be in Treviso. Later on, if that happens to change then it changes but it might not. I might be here for one, two, three, five years. Right now, we’re taking it day-by-day.

How’s the family doing there?.

BS: Well, it’s tough. My kids are getting adjusted to school, mostly my wife… The language is the biggest thing. It’s not so much the communication with people, ’cause it’s not very hard to do, it’s learning what’s going on around you. If you want go to the circus, it’s hard to know what days the circus are, what time the shows are… Things like that. But there’s a lot of things that we really like. I can tell you right now the food is big-time quality compared to America. And I like the idea that at the middle of the day, you have your siesta and they you go back to work some more. It’s not the way it was in America, but that’s not bad.

BS: It’s funny that you ask that because the team that won in ’08 was really good but I really believe that the 2010 team during the playoffs was a better team. But that ’08 team was one the best regular-season teams I’ve ever been on.

How close were last season’s Bulls to those teams?

BS: Not really close. You lack experience at playoff level. Derrick Rose needs to go through the bumps and bruises of the playoffs to get over the hump. If you watched the games against Miami, the Heat knew hot to get over the hump. Dwyane Wade and LeBron James both have been in the Finals and Dwyane has performed in the Finals. So you have to get that – being there and making it. I can only assume Derrick Rose has been working his tail off this summer thinking about Miami and what he’s going to do down the stretch playing against LeBron. You have to go through that. Michael Jordan had to get through the Pistons, and the Pistons had to get through the Celtics. It’s like once you go through that, then that’s when you become a better team.