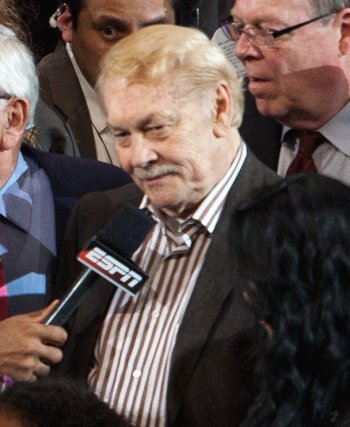 Okay, okay, it’s true. I’m one of the original noisemakers on the Jim Buss alarms that are now blaring loudly from the Los Angeles Lakers offices in El Segundo, California.

And I truly hope that time proves me wrong about Lakers owner Jerry Buss’s incessantly ball-cap-wearing son, but so far time just keeps proving that I was right to begin voicing my concerns years ago over the advancing nightmare that Jimbo would one day rule the Lakers’ organization.

Well, that day is here, and it seems even bleaker than first imagined.

It could be that I’m totally wrong on this one, that I’m just blinded by the boredom of the NBA lockout, that I have little better to do than to stir up the anxieties of fans who were already fretting on the therapist’s couch over the Lakers’ demolition at the hands of the Dallas Mavericks last spring.

But that’s not what the mounting evidence says.

One by one in recent months key figures from the Lakers have spoken out or signaled their misgivings about Jim Buss getting the keys to the franchise.

Ronnie Lester, the team’s longtime assistant GM groomed by Jerry West, had his say after being laid off back in the summer.

Recently, it’s been former assistant coach Brian Shaw who has opened up about Jim’s eagerness to distance the team from the highly successful era of coach Phil Jackson.

Clever and coy in dealing with Jim while dating sister Jeanie Buss over the past decade, Jackson upon stepping down last spring finally fired several shots at Jimmy boy.

Jackson had long indicated he had no relationship with Jim Buss and not much of one with Jerry, while insiders in the Lakers organization said Jackson obviously had no respect for Jim.

Jackson has long been known as a tough political player from his stormy days with the Bulls, but you could hardly blame him for not wanting to kiss up to Jim. 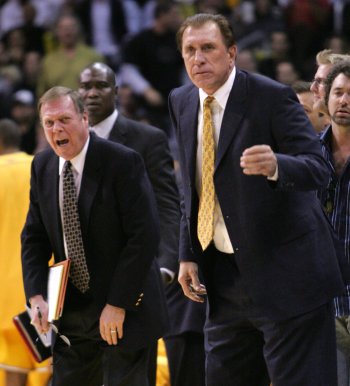 Jackson’s friends had long pointed out behind the scenes that Jim was the driving factor in Jackson’s 2004 dismissal as Lakers coach and it was Jim who moved unilaterally to make the disastrous Rudy Tomjanovich hire that cost the team millions.

“The Lakers will be a disaster when Phil leaves the franchise,” one of Jackson’s associates predicted a few years back. “Jim’s biggest move is to put his personal bartender on the team payroll. Jim never comes around the franchise, doesn’t even have an office there.”

Jeanie Buss, who had spent years working in marketing for her father’s teams, was the obvious competent choice to run the franchise, the Jackson associate said, an opinion long echoed by Lakers fans.

The Jackson associate added ruefully that Jerry Buss was too old-fashioned to give control of the team to Jeanie. The word coming out of the franchise is that the elder Buss simply couldn’t stand the idea of his sweet daughter getting roughed up by pro basketball’s pool of sharks.

I hesitate to question the judgment of a guy as successful as Jerry Buss, but his daughter has been dealing with Jackson quite effectively for about 12 years now, and if he’s not an NBA shark, I don’t know who the hell is.

Come to think of it, that’s probably why Jerry Buss never cared for Jackson all that much. It takes a shark to know a shark, as they say.

Personally, I knew Jeanie would make a great executive back in the ‘90s when she posed nude in team offices for a Playboy magazine spread. Who in the NBA and especially who in a sex-addicted franchise like the Lakers could ever say no to her?

I’m kidding, of course. The thing that has made her such a successful business manager of the team is that she works her pretty tail off.

That, and she truly loves the Lakers and has been a serious fan for years.

“I went into it because I love the Lakers, and when you love the Lakers, you want them to win so badly that you will work tirelessly to make that happen?” she told an interviewer years ago.

I’m not even sure her brother is a good fan, much less an executive. Has he really, truly cared about the team over the years?

Maybe so, but he’s been too reclusive to express it. Meanwhile, Jeanie has been there in the arena, running the show, taking care of the problems, night-in and night-out, for decades.

She lives the Lakers.

But before this Jimbo deal becomes all about Phil and Jeanie, I should point out the alarms began long before Jackson arrived in Los Angeles.

Former Lakers executive Jerry West hides his feelings about as well as Wall Street hides its greed. West was obviously distressed back in the 1990s when Jerry Buss told him to start training Jim in the ways and means of hoops because Jim would run the franchise someday.

The mere thought of that obviously nauseated the perfectionist West, a hoops purist if there ever was one.

Now Jackson and West have had well-documented disdain for each other dating back years, but the one thing that they would cause them to hug and express agreement is the belief that Jimbo should be nowhere near the decision making for this great basketball team.

Of course, Jim himself has played a huge role in this perception, beginning with his foot-in-mouth comments years ago to Sports Illustrated that NBA scouts know little more than the average fan. 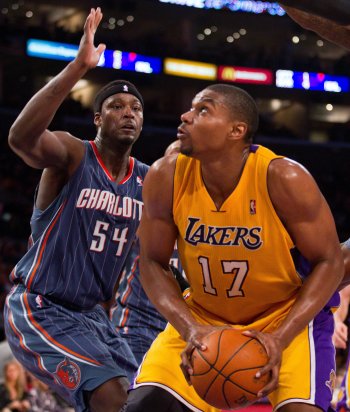 These developments were mostly curious to me until my dear friend (and Lakers assistant coach/triangle offense guru) Tex Winter began privately expressing concerns about Jimbo’s influence on the franchise several years ago.

Tex is the most honest, unfettered soul I’ve met in 30 years of stalking the hallways of basketball. He has had no real agenda other than winning games and Tex considered Jim Buss a major loose cannon, particularly in his dealings with young center Andrew Bynum.

Jim’s approach created a strange atmosphere around the team, according to Tex, who had spent more than six decades coaching hoops. He had been the steadying force for the Bulls franchise when it was being ripped apart by a war between Jackson and Jerry Krause.

Some might wonder if Jim Buss is merely the second coming of Jerry Krause, the former Bulls executive who was also eager to get rid of Jackson. Lakers fans should be so lucky.

Krause, who waged legendary battles with Phil during the Jordan championship era, had spent years earning his stripes as a basketball scout. Krause knows the game inside and out.

Jim Buss has never paid such dues, which is the exact problem with his asserting such a heavy hand in the team’s personnel decisions.

Even his father never subscribed to such presumption. The elder Buss hired and trusted the best minds in basketball.

Jim Buss is eager to prove that he too is one of those minds. Now, I don’t know him. He may well be a nice man, the kind who fans would love to share a snort with.

But he is not one of the best minds of basketball. And he never will be.

When he lays off the team’s longtime assistant general manager just as he’s taken over indicates Jim Buss is interested in fewer advisers, not more.

His eagerness to be rid of Jackson likewise indicates that Jim Buss is more interested in proving himself than he is in retaining the services of the craftiest competitor in the history of the game.

It’s true that Jackson turned 66 in September and he was clearly worn down at the end of his coaching tenure, but his mind is as sharp as ever. Jackson, Shaw and Lester could have been a force with the team for many more years.

It seems to me they earned the right to reshape the team to keep their championship formula going.

Instead, the focus is on Jim Buss? He’s going to decide the team’s moves as Kobe Bryant nears the end of his career?

No longer am I an irritating, lonely voice in the wilderness questioning all of this. There are more and more people wondering what’s going on.

Some are even saying that Jerry Buss forcing this move on the fan base indicates the good doctor was more lucky than smart in his decades owning the team.

I don’t buy that. Certainly Jerry Buss has been fortunate, beginning with his first season in Los Angeles, when a young Magic Johnson drove the Lakers to the title. But Jerry Buss has always been the kind of man who made his own luck. It’s his team, of course, and he’ll do what he wants with it. So far that’s produced an amazing ride for the team’s millions of fans.

Yet even Jerry Buss isn’t infallible. And the noise in L.A. is growing louder. Maybe things will quiet down when the NBA finally resumes and new coach Mike Brown can prove that his hiring was a good move by Jim Buss.

I sure hope that’s how it turns out. But right now, it doesn’t feel that way. Not even close.