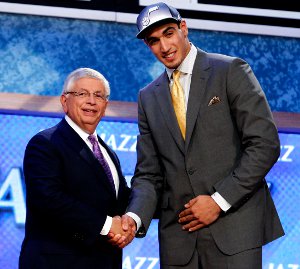 Jazz draftee Enes Kanter is working out in Los Angeles getting ready for an NBA season that might never happen. That would be the second year in a row in which Kanter is unable to play in the U.S. due to off-the-court issues after being declared permanently ineligible by the NCAA last season, when he would have played for John Calipari‘s Kentucky.

The Turkish center is in no rush to take an offer abroad, though, and will probably wait and see what happens with the lockout before committing to any team, according to agent Max Ergul.

Anyway, we’re not ready to commit. We might still have an NBA season and at this point every offer we get from Europe is from teams that want him for a full season. As of now, we can’t take a deal that doesn’t include an NBA out, but that may change if [the NBA] goes to court. That would change the whole thing.”

Kanter’s only competitive basketball action in the last two years took place at the Eurobasket last summer. The third overall pick in the 2011 draft averaged 9.6 ppg and 3.9 rpg with the Turkish National Team there.