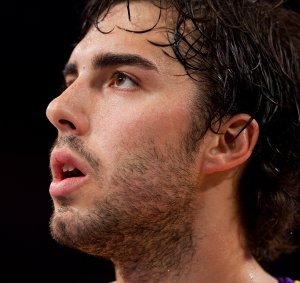 Was your plan all along to play in Europe?

Sasha Vujacic: Yes, when I came to Europe I decided to find a team where I can stay for the entire year. I think it’s fair enough to me and fair enough to the team. Also, you dedicate yourself and your time to the team so I’m happy I made that decision.

How’s the experience so far having a lot of shots and a lot of minutes?

SV: It’s very different from what I was used to in the past seven years. European basketball is not the same… I’m still getting into it, but luckily enough we have good players, good team. We play together, we play as a team. So far we haven’t played the best basketball yet, but hopefully is yet to come.

In which way do you think basketball in Europe has changed since you left?

SV: It has become a little bit faster, a little bit more physical that it used to be, but still not at the NBA. It’s very tactical. It changed in a good way. There are better players, better teams, better excitement. A lot of people that I’ve been talking to, they’ve been watching and following the Euroleague a lot.

Do you feel fortunate that your experience in the NBA took place for the most part in L.A. with the Lakers?

SV: Yes. When I was younger, when I decided to go to the NBA, I always wished to play with the Lakers. That was the team that I was aiming, the team that was the best fit for me. I was fortunate that I had the best players and the best coaches, learning from them. They taught me a lot. Also winning a couple of championships… As fortunate as I was, it didn’t come for free – it took a lot of hard work. I love the organization, they’re my family and they treated like family when I went to New Jersey, so L.A. is home for me. 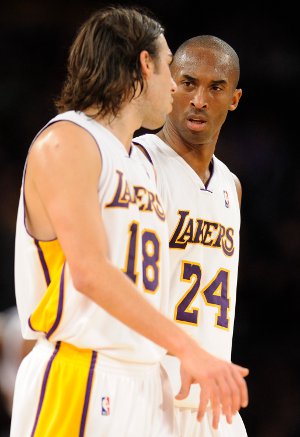 What kind of career do you think you would have had in the NBA without Kobe Bryant in front of you?

SV: [Laughs] Yeah, that’s a good question. Could have been much different… There are always pluses and minuses in life having the best basketball player in front of you. You learn a lot, you play against him in every practice, you learn how to become better. But also there is a big minus about the playing time and about growing as a player as well. Luckily, I wasn’t there for one, two, three years but I was there for seven years, so it helped me and it hurt me. Now I’m 27, I’m not too old yet, so hopefully I can still play a little bit longer.

Were you disappointed when you got traded to the Nets?

SV: I was not shocked. I was expecting the trade because I wasn’t in the rotation anymore…

What do think happened for you to be out of the rotation?

SV: Nothing, just a different game plan, different basketball we started playing. It became more transition and the coach preferred other players. Once I was traded, it gave me the opportunity to regain confidence and have fun.

As a Laker, you are always kind of one of a big star in town. How is it now being in Istanbul?

SV: Everybody loves Anadolu Efes. We are the only team in the Turkish League that doesn’t have a soccer team, so everything that Anadolu has done and the fans they have is because of the basketball team. Our president was the first one to bring basketball to Turkey. It’s a very prestigious team in Turkey and also in Europe.

Did you feel respected by your peers during your NBA career?

SV: Yes, yes. In the NBA, and I think also in life, the way you give respect you get the same back. I respected my teammates and they respected me and it was fun.