How to land Chris Paul

How to land Chris Paul 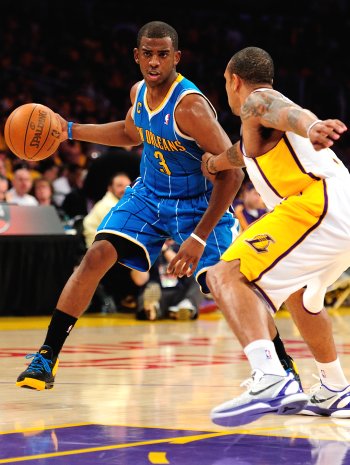 While keeping a mum demeanor and purportedly remaining focused on his 2011-12 campaign with the New Orleans Hornets, one can be sure that Chris Paul‘s people are hard at work laying the groundwork for Paul’s exit from New Orleans in favor of New York. Since Carmelo Anthony, Amare Stoudemire and Chris Paul toasted to a rosy future together with the Knicks some 16-plus months ago, the NBA world has been waiting to see whether another Big Three might congeal – only this time in the NBA’s biggest market.

First, on the first day of free agency in summer of 2010, Amare Stoudemire signed a five-year, $100 million deal with the Knicks. Then, during the 2010-11 season, Carmelo Anthony finally departed Denver, which, rather than losing Carmelo to free agency, collected from the Knicks capable players Wilson Chandler, Danilo Gallinari, Raymond Felton, Timofey Mozgov, first and second round draft picks and cash. Carmelo’s extend-and-trade was valued at three years and $65 million. Just as acquiring Carmelo was more challenging than signing Amare, acquiring Chris Paul, quite possibly the most valuable of the three, will be the hardest of all.

Having proclaimed his desire to play for New York, the Knicks could acquire Paul either via free agency, extend-and-trade during the season, sign-and-trade after the season or through free agent signing with his Bird Rights after acquiring Paul in an in-season trade. Each of these options will be analyzed below.

Paul would be acquired with Knicks’ cap space during the summer of 2012. In order to have the most cap room possible, the Knicks would have to make strategic, one-year signings during this year’s free agency. Given a $58 million salary cap and assuming that the Knicks gutted the roster of every single player except Amare (~$20 million) and Carmelo (~$19.4 million), they would have $18.6 million in cap room. To clarify, this would require that the Knicks deal Renaldo Balkman and Iman Shumpert (and deal Toney Douglas or be willing not to pick up his option if Paul wants max money). Next, we would have to factor in cap holds of $473,604 (2010-11 minimum rookie salary) for each of the roster spots New York would have unfilled, up to and including the 12th spot. Ten minimum salary slots would equate to $4.74 million.

Under such a deal, Amare’s contract would be $40 million more generous than Paul’s for only one additional year of service. While Paul claims to be all about winning, he deserves better than to play for 2/3 of his actual value. In fact, an MVP-caliber superstar point guard in his prime, he is arguably worth more than either Amare or Carmelo.

The chief benefit of signing Paul this way is that the team scores an incredible value and has three superstars. The drawback is the inability of the team to sign any other player for more than the minimum salary (with the exception of a mini mid-level signing). The Knicks would have to be very confident in the Big Three’s chemistry and commitment to stay long-term because, especially under the new CBA, it could take several years to acquire the complementary players necessary to win a championship. The nuclear option (see below) envisions a Chris Paul free agent signing as well but for more money and accompanied by the signing of Dwight Howard. 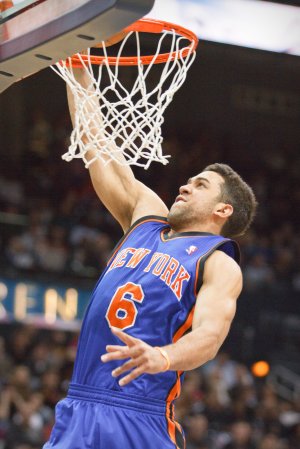 Under an extend-and-trade, Chris Paul would be entitled to two new contract years at 4.5 percent raises off of his current deal, under which he will make $16.359 million in 2011-12. This would work out to two years, $34.9 million. Six months after the trade, the Knicks could extend Paul’s contract to four years (including the current season) with 7.5 percent increases (since his Bird Rights would be intact). This second extension should strategically occur in November 2012, so that Paul could have four full seasons left on his deal for a total of four years, $74.6 million. Compared to the free agency option, Paul would earn over $15 million more under an extend-and-trade (followed by a secondary two-year extension) for the same four years of service.

As discussed previously, the Knicks were able to acquire Carmelo Anthony via extend-and-trade because they had several young, intriguing players who could contribute immediately and at low cost. With only Toney Douglas ($1.1 million), Landry Fields ($0.8 million), and possibly Iman Shumpert ($1.34 million) if he exceeds expectations, the Knicks do not have enough players with enough salary to match Chris Paul’s salary. Because the Knicks are already over the salary cap, they will not be able to sign additional free agents who might strike New Orleans’ fancy. The Knicks are also hamstrung for future first-round picks because Houston (from the Tracy McGrady trade) and Denver (from the Carmelo trade) both own Knicks’ future first round picks. The Knicks could trade Chauncey Billups ($14.2 million) in addition to the aforementioned players, and the deal for Paul would work. While New Orleans would not receive that bountiful of a haul, it would certainly be better than keeping a lame duck Chris Paul around long enough to watch him leave in free agency.

However, the Knicks’ offer might not be better than a trade of Paul to a team who would use him as a one-year rental in hopes of competing deep into the playoffs and thereby hoping to convince Paul to re-sign. The Hornets would be advised to field as many trade offers for Paul as possible so to drive up the price New York would have to pay for Paul.

If the Knicks have trouble acquiring Chris Paul during the 2011-12 season, they would have particular difficulty sign-and-trading for him in the summer of 2012. At that point, the Knicks would not have Chauncey Billups’ contract to use for matching purposes. The only workable scenario would be to sign-and-trade some of New York’s own free agents (e.g. Chauncey Billups, Landry Fields, and Toney Douglas) as part of the sign-and-trade for Paul. The prospects of all three of these free agents wanting to go to New Orleans is miniscule indeed.

If the Knicks were somehow able to accomplish a sign-and-trade for Paul in 2012 free agency, under the new rules Paul could receive a four-year contract at 4.5 percent increases over his current salary. Despite his All-NBA and All-Star accomplishments, Paul can’t receive the 30 percent of salary cap figure through a sign-and-trade. As a result, he receives four years, $72.8 million. Since the Knicks would wind up over the cap after this signing, they would have to deal significant 2012-13 salary back to New Orleans, which the Knicks do not presently have.

If (a big if) the Knicks were able to put a compelling enough package together to compel New Orleans to trade Chris Paul to New York, then the Knicks would have the ability to let Paul’s contract expire and then re-sign him with his Bird Rights in free agency in 2012. After playing out the final year of his deal, Paul would be able to sign a five-year deal starting at 30 percent of the salary cap, or $17.4 million. However, 7.5 percent of his prior salary of $16,359,805 is slightly higher, at $17,586,790. So, if the Knicks sought to get Paul the most money, he would be able to sign for five years, $97,562,713. With this strategy, the Knicks do not get a contractual assurance that Paul will be a Knick long-term until after the Knicks have traded for him. Because he has strongly indicated for over a year his desire to play in New York, and because the Knicks would not be able to give up that much to get him, it would be worth the risk.

A second issue with this approach is that New Orleans could trade Paul to another team who has more assets and Paul would then have to wait out the year before signing with New York under the straight-up free agency approach, where he would forfeit significant guaranteed money to play in New York. Finally, this option leaves the Knicks with little-to-no room for any significant players other than Amare, Carmelo and Chris. Could this potentially injury-prone unit meaningfully compete with Miami’s Big Three in the long-term? Eh… 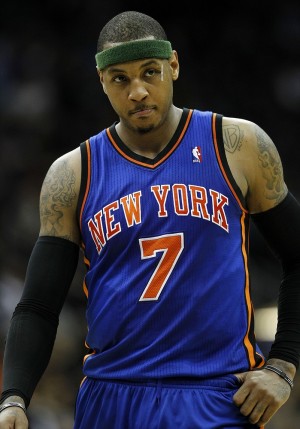 NUCLEAR OPTION (SAVE THE WORLD OR DESTROY IT?)

The highest risk-reward (and certainly most ruthless) strategy for the Knicks would be to trade Carmelo or Amare to a team with young assets, expiring contracts and picks, clear a bunch of cap room and try to lure Dwight Howard and Chris Paul (or Deron Williams) to take less money to play in New York. Paul’s salary in this scenario would range wildly depending on the salary that Howard would be willing to take as well as whether the Knicks would be moving forward with any of the young pieces acquired in the deal sending Amare or Carmelo elsewhere. Having scored the young assets and having convinced two megastar players to take less than max money, the Knicks would be well on their way to challenging Miami, who have had a head start in their team building and team gelling process.

Under this new CBA, the only way to acquire a superstar from another team and to give the superstar max money is to trade with a team who would agree to take on your players and/or picks in exchange. After trading for the superstar, you would need to wait until free agency for the guarantee of him re-signing with your team. During that time period, the superstar could change his mind about re-signing and you could be stuck with a very pricey one-year rental.

If the team desiring the superstar can’t work out a deal with the team holding the superstar, and if the acquiring team is low on (or out of) cap room, then the superstar will have to sacrifice money in order to play for his desired team. With it becoming ever more difficult to sign away players for maximum money, with the precedent set in Miami, and with it becoming ever more difficult to build strong, deep teams with superstars, we can expect to see more stars sacrificing some salary in order to make their teams better. Such would occur in the nuclear option above, which could make for the strongest Knicks team of all.