Nachbar meets with Knicks, waits for his turn

Nachbar meets with Knicks, waits for his turn 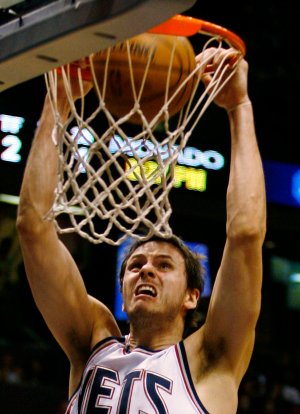 Slovenian forward Bostjan Nachbar met with Knicks officials Tuesday in what was initially deemed to be a workout but ended being more like a job interview.

“It was an informal (workout),” Nachbar told HoopsHype. “I went there basically just to talk a little bit to the Knicks’ staff. It wasn’t a workout like coaches watching me or something like that. They just wanted to see how I’m doing, see where they are at… There’s interest from both sides, let’s see what happens.

“It was kind of an interview, but I know Mike D’Antoni from before [he coached him at Benetton Treviso] so I didn’t really have to sit down and introduce myself. We know each other very well. He was one of the most important figures in my career, especially when I went to the NBA. It was good to catch up with him.”

Nachbar, who has career averages of 7.1 ppg and 2.6 rpg in the NBA, says he has a meeting lined up with the Nets next and plans to keep talking with other teams – including the Pistons of Lawrence Frank, who coached him in New Jersey between 2006 and 2008.

Returning to the States was the plan all along, according to Nachbar, who signed with Dynamo Moscow in the summer of 2008, when things were looking up financially for some of the top clubs in Europe. Josh Childress got one of the richest deals in FIBA basketball history with Olympiakos that offseason and Nachbar didn’t fare bad either – at least, on paper. His contract with Dynamo was originally reported to be worth 9.6 million euros (around $15 million at the time) over three years.

“I wasn’t the only player that made that decision. (Carlos) Delfino, Childress… They went to Europe too. It was a financial decision to play with Dynamo Moscow, but I also wanted to play for a coach like David Blatt and for a team that could do something big in Europe. Unfortunately, there were financial problems.”

Nachbar ended up leaving Dynamo after just one year and signed with Efes Pilsen, where he averaged 9.1 ppg in Euroleague action in 2010-11 following a season marred by a contentious relationship with head coach Ergin Ataman. Despite the incidents, the Slovenian forward doesn’t look at his decision to go to Europe with regret.

“I can’t look back at it that way. In 2008, the situation not only in basketball but also in the world was very different. I played in some great cities and met a lot of good people. I don’t look back and cry about those three years that I played in Europe. Hopefully I’ll continue my NBA career now.”

Nachbar, 31, says he’s unlikely to take a non-guaranteed deal to join an NBA squad and would much rather sign with a team in a win-now situation.

“I think it makes most sense to bring a player like me into a team that is playing for a goal and they know exactly what they get when they sign me. A team that is trying to win something.”