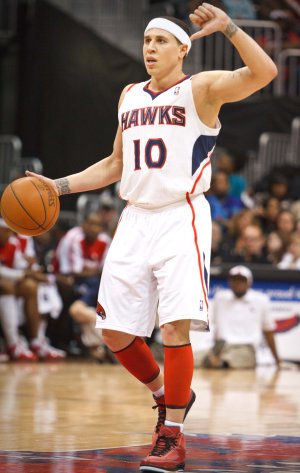 While the devoted citizens of Sports America focus on where the ultimate destinations of superstars Dwight Howard and Chris Paul might be, the free agent frenzy has mostly calmed down. Many eligible FAs have re-signed with the teams they played for last year, and many more have moved on in either direct signing or forced trades.

Of those old faces in new places, guys like Tyson Chandler, Chauncey Billups, David West, et al, will have a positive effect.

But here are the five worst FA signings thus far:

Jamal Tinsley – Utah. His most useful strengths are lane penetration and kick-out passing. But despite his being a poor shooter (39.5 percent lifetime), Tinsley insists on forcing shots and, even worse, has a prickly personality. He’s always chaffed at being a backup, yet there’s no way he supplants Devin Harris. Perhaps Tinsley’s being exiled from the NBA for most of last season has chastened him. Perhaps not.

Aaron Gray – Toronto. Big, slow and strong, Gray’s natural niche is third-string center. His moves in the low post are robotic and his defense is unacceptable because of his limited lateral movement. Last season, Gray’s total points (129) were virtually matched by his combination of turnovers (32) and fouls (96). In signing Gray (along with Canadian-born Jamaal Magloire), the Raptors have demonstrated just how desperate they are to put a big body in the middle.

Vladimir Radmanovic – Atlanta. V-Rad is a one-trick pony who doesn’t rebound, pass, defend or execute. Indeed, long-range shooting is his solitary skill. No wonder he only has eyes for the hoop. At best, this guy is the fifth big man in a four-man frontcourt rotation.

Mike Bibby – Knicks. Old, slow, defenseless, and in the way. Yes, he’s a terrific one-on-none shooter, and to be of any help he must take full advantage of whatever kick-out passes he receives when opposing defenses cluster around Carmelo Anthony and Amare Stoudemire. Nor is Bibby a good fit in Mike D’Antoni’s beep-beep offense.

TJ Ford (San Antonio), who like Tinsley takes too many shots, but is quicker and will undoubtedly alter his priorities under Pop’s stern guidance. Or not.

Jamaal Magloire (Toronto) has nothing left. In any case, he’s always been a bully who folds when he himself is bullied.

Gerald Green (Los Angeles Lakers) has wasted his All-Star caliber skills because of his profound immaturity and low basketball IQ.