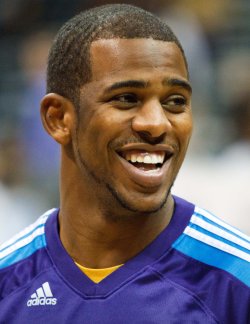 Let’s dispense with considering contracts and salary caps and deal with the on-court ramifications of the Clippers-Hornets trade.

WHAT NEW ORLEANS GETS:

Chris Kaman: An oft-injured center who has missed 133 games in the past four seasons. When he’s healthy, Kaman scores with jump hooks, tight spins and improving short-range jumpers. Kaman is also a good rebounder and adequate shot-blocker. On the down-side of his game, Kaman is a mistake-player and not a particularly good athlete. In sum, he’s not much more than a capable big man.

Eric Gordon: A big-time shooter and scorer, a finisher not a passer. The kind of point-maker who can be the focus of a top-notch offense. At 6-3, his defense mostly acceptable except when he gets overpowered by bigger guards.

Al-Farouq Aminu: Runner and leaper who must learn to shoot, and to harness his explosive athleticism. He hit the wall late in the season as a rookie, but has unlimited potential.

Too bad the only meaningful leftover players on the Hornets’ roster are Trevor Ariza, Carl Landry, Marco Belinelli and Jarrett Jack.

Look for Gordon to put up huge numbers, Amin’s education to be accelerated, and New Orleans to be battling to stay out of the cellar. However, with Minnesota’s top pick in the bag, plus their own highly probable lottery selection, the Hornets can certainly look forward to a viable future.

WHAT THE CLIPPERS GET:

Chris Paul: An incredible passer. He can make accurate, zippy passes with his left hand better than most of his peers can execute with their strong hands. Among his other virtues, CP3 sees the floor, is unselfish, has a rapidly improving jumper (especially from beyond the arc) and throws perfecto lob passes that can challenge those thrown by Jason Kidd.

Paul also excels in screen/roll situations, which fits perfectly with the quick spins, great hands and extraordinary hops of Blake Griffin. The only caveat here is that Griffin tends to slip his screens too quickly and must learn to set more solid ones.

Every player who ever laced ‘em up has weaknesses, and so does Paul: On offense, he’s much better going to his right than to his left. Generously listed at 6-0 and 175 pounds, Paul has great difficulty defending bigger, stronger opponents. He must therefore resort to gambling on steals, which are wonderful when he succeeds, but costly when he fails.

Worse, he’s been slowed by leg and ankle miseries the last two seasons and it’s whispered around the league that he’s already lost some of his previous warp-speed.

Still, CP3 is certainly a franchise player who single-handedly bumps the Clippers into the playoffs. 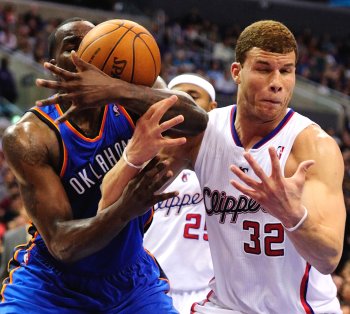 If Griffin will benefit from Paul’s passing fancies so will DeAndre Jordan – another runner and high-jumper. Jordan, however, will have to improve his rebounding, his mano-a-mano defense and, if he wants to be on the court in the endgame, his atrocious free-throw shooting.

Elsewhere, Eric Bledsoe is a young, fleet-footer backup to Paul, who also has a bright future. Caron Butler is a driver/slasher who can compensate for Paul’s not being a serial scorer. Mo Williams now seems extraneous. Randy Foye is another proven scorer with eyes only for the rim, while Chauncey Billups can return to his natural position at shooting guard.

On the debit side, Billups is the only dependable long-distance dialer. The Clips also lack experienced frontcourt reserves.

Gaining the playoffs is a certainty and holding their own against the arch-rival Lakers is probable. But an immediate championship is still far beyond the Clippers grasp.