Derrick Williams: "Being the No. 2 pick is a blessing in disguise"

Derrick Williams: "Being the No. 2 pick is a blessing in disguise" 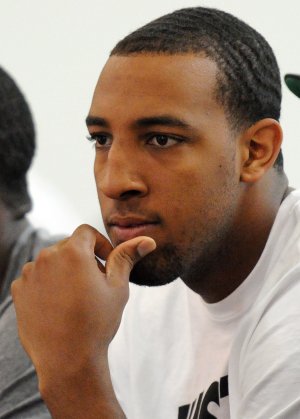 What has been the toughest transition for you going from college to the NBA?

DW: One thing is defensive strategies. In college, you can play zone if you struggle a lot. And, obviously, the shot clock: 35 seconds (in college) to 24 seconds (in the NBA). That’s a big difference. You’re getting up and down the floor a lot faster.

I spoke to a veteran NBA scout who has seen you play and he called you a “beast.’’ Are you much bigger than you were in college at Arizona?

What did you do to improve your strength?

DW: A lot of strength training. The biggest thing about lifting weights, though, is that you want to shoot after you’re done lifting. Sometimes, you won’t shoot as well after lifting, but you want to keep that motion, you want to keep your shooting rhythm. You just don’t want to get too heavy, too bulky.

Are you upset you weren’t the No. 1 overall pick in the draft?

DW: (Laughs) Sometimes it’s better to be No. 2. I don’t have as much pressure as the No. 1 pick. Sometimes, I think being the No. 2 pick is a blessing in disguise. I think it was better overall for me to come to Minnesota. I can learn from some of the players at my position, like from Kevin Love and Michael Beasley. I learn a lot from those guys every single day.

Do you have a chip on your shoulder about not being the top pick?

DW: Oh, yeah. I’ll always have a chip on my shoulder about that. You always want to be the No. 1 pick. This whole season I’m going to go out there and try to prove to everyone that I should have been the No. 1 pick.

The Timberwolves have a slew of talented, young players. Is it possible, there may be too many young players on this team, considering most of the best teams in the NBA are veteran laden?

DW: I think it’s good. We have a team where everybody is about the same age. Most of these guys are in between 20 and 25 years old so, off the court, everybody is hanging out with each other. We have fun going out together and I think the good communication we have off the court will help us on the court. So far, it’s been good.

Have you been the subject of any rookie hazing?

DW: For our open practice, the veterans had us sing the national anthem and they had us dance in front of the crowd. Myself, Ricky (Rubio) and Malcolm (Lee). It was very embarrassing, especially in front of all those people. But you’re only a rookie once.

There’s been quite buzz about the arrival of Rubio in the NBA and how he has conjured up comparisons to the legendary Pete Maravich. What’s your take on your teammate?

DW: Ricky is just a good player. And he’s a good person in general. You want to hang around guys who are good people and stay out of trouble. And he’s a floor general who loves to pass the ball. Any big guy wants to be on a team with a guy who passes the ball like him. He’s just a great player and greater person off the court.

How excited are you about being on the floor with him?

DW: I never grew up with a passing point guard like Ricky. Having a guy like him who has a high IQ and great vision makes it a whole different game. It really benefits all of us.

Have you and Ricky talked about how you and Kevin Love represent the future of the Timberwolves?

DW: Yeah, I’ve talked to him about that. Like I said, we have a lot of young guys on this team besides me and Ricky. But we want to be here and help this team win the Western Conference championship. We want to be part of that. Hopefully, we’ll do that one day.

Do you think the Timberwolves, despite being so youthful, can shock the world and make the playoffs this season?

DW: I do think it is possible, especially with the West being really wide open except for a few teams like Dallas, the Lakers, the Clippers and the Thunder. Those four teams right off the bat are really good playoff teams. Other than that, it could be wide open. We are young, but that doesn’t mean we can’t be good.

Besides reaching the playoffs, is being the Rookie of the Year one of your goals?

DW: I’m trying to win every award. But you can’t win awards unless you win. I feel like all of us on this team came from winning programs in college and want to keep winning at this level.

Gery Woelfel covers the Milwaukee Bucks and NBA for The Racine  Journal Times.