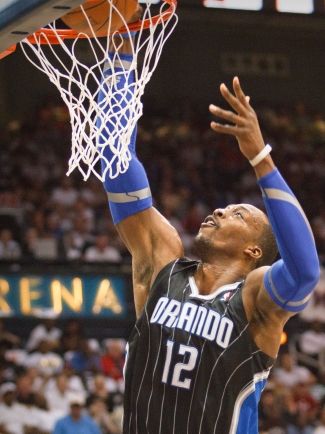 I’ll soon be seeking employment with one or more NBA teams helping tall guys develop a jumper and improve at the stripe, and if I land a position it likely will entail surrendering my free-speech rights on basketball issues. Alas, that’s the NBA way, First Amendment be darned. So in the meantime I’m going to get some things off my chest.

One player I think I could help significantly is Dwight Howard, either on my own (my preference) or in conjunction with his personal shooting coach (Ed Palubinskas, assuming their offseason partnership has extended into the season) or Orlando Magic assistant coaches Mark Price and Patrick Ewing. My objective would be to help Howard develop – or rediscover – his very own shooting style, so he can be as spontaneous and instinctive with jumpers in the 10-to-15-foot range (much like one of his mentors, Hakeem Olajuwon) as he already is from in close with his lefty and righty jumphooks.

At the stripe, the easiest way to get Howard on track is not with something new but something tried and true: the simple, rhythmic style that allowed him to shoot over 70 percent in three separate months of his rookie season. That was before Magic assistant coaches monkeyed with and made a mess of his stroke, leading Howard to seek outside advice in the 2007 off-season, this past one, and perhaps others. One of the sadder aspects of Howard’s shooting career is that he has failed the past six seasons not with his own shot, but with odd deliveries and exaggerated follow-throughs recommended by Magic personnel.

Palubinskas, a sensational contest shooter, hasn’t received the credit he deserves for his free-throw work with Shaq from late 2000 through 2003, which produced the best stretch of his career and was indispensable to the Lakers’ 2002 title run, as I've noted in a few essays, including one in 2004 and another in 2006. But if he’s still tutoring Howard that means they’ve been at it for four months already. It's not looking good. Through games of December 28, including preseason, Dwight has looked unsure, uncomfortable and unconfident.

I have no inside scoop as to who, if anyone, Howard is presently working with, or if he's getting conflicting advice from Palubinskas and the Magic coaching staff, but in my view his current approach is too technical. For instance, he’s now quite consciously taking his guide hand off the ball just as he’s about to release the shot, giving him one more thing he doesn’t need to be thinking about in the middle of his stroke. Worse, one of the most rhythmic guys in the league has absolutely no rhythm in his routine or delivery. The only positive is he’s no longer violating the 10-second rule; he’s shooting within 6 to 8 seconds of getting the ball – and missing badly.

But that isn’t one of the things I wanted to get off my chest. This is:

Howard and coach Stan Van Gundy won’t like what I’m about to say, but in the long run (assuming Howard stays put this season) they just might be better off. Howard will be able to play heavy minutes in the playoffs without needing the refs to look the other way as he repeatedly violates a rule in plain sight. And by cleaning up this aspect of his act now, he’ll give his teammates time to find other ways of being effective playing alongside someone who no longer sets obvious moving picks. (This applies as well to new teammate Glen “Big Baby” Davis, who learned to set moving picks in Boston from Doc Rivers, Kevin Garnett and Kendrick Perkins.)

A staple of Stan Van Gundy's offensive is the uncalled-moving-pick and roll (a topic I first addressed two years ago), and Howard has already set a bunch this season. Granted, “set” is not the right word, because he doesn’t get set (both feet planted, torso between the legs and not shifting left or right); instead, he gets active. He’s looking to move – at the last second – left or right, whichever will be most effective in staggering or tripping the defender, or forcing him way under the pick when Howard prematurely rolls to the hoop. And the fact that Howard sometimes has both hands up in the air, as if he’s showing a bank robber he’s unarmed and helpless (or showing a ref that he’s innocent), doesn’t prevent him from sticking out a foot or a hip or both. So far, it looks like Dwight will be able to count on NBA refs to continue missing about 95 percent of his moving picks.

That's not easy for a ref to do. Howard is out in the open, somewhere around the three-point line. The ref is staring at the play, which proceeds at a leisurely pace. Howard waits for his teammate to dribble in his direction, and he looks at the defender the way a fullback looks at a blitzing linebacker: it’s his job to get in the blitzer’s way. He’s taken the passive, stationary act of picking and turned it into an active, mobile one. One reason Howard and other moving pickers get away with the violation so frequently is the absurd approach the NBA takes to training refs, which is known as "reffing the defense." That is, you direct your focus at the defender to determine what is going on between him and the player he's guarding. So the modern refs miss lots of moving picks, traveling, palming, and dribblers veering into or dislodging the defender – all because such infractions are committed by the guy they're not looking at.

"Reffing the defense" was the idea of Darell Garretson. This fine man's legacy should be focused on his career as one of the ten best refs in NBA history. Instead, a big part of it will be this ridiculous philosophy that he pushed as the league's supervisor of refs from 1981 to 1998 and which is unfortunately lodged in the brains of the younger generation of NBA whistle blowers.

My hunch is Howard gets away with moving picks more than the typical moving picker because he learned the techniques from Patrick Ewing – the same guy who taught Yao Ming to set moving picks in Houston and who set plenty of his own as a New York Knick. (Remember the brouhaha that ensued when Mark Cuban complained about Yao's moving picks in the 2005 playoffs? Cuban was justifiably riled that the so-called greatest hoop refs in the world wouldn't call blatant moving picks right under their noses.) It’s quite possible that a large segment of refs labor under the illusion that because Howard has been schooled by Hall-of-Famer Ewing (who is quite visible on the Orlando bench), then whatever type of pick Howard “sets” must be legit because he's doing it the Hall-of-Fame way. Yao received the same benefit.

Although Ewing was a moving picker prior to Pat Riley becoming his coach in New York, one thing he learned from Riley is that NBA refs can be trained, just like prize poodles, to behave in a certain fashion. Riley wanted his Knicks to play defense more aggressively than the rules allowed, so he had his players do just that on a consistent basis, confident that most refs would soon adapt to and accept this “new normal” rather than blow the whistle every five seconds or call three fouls at the same time and award the fouled team six free throws. Riley, the Van Gundys (both of whom coached under Riley), Doc Rivers (who played for Riley) and perhaps other coaches have applied the same logic to setting un-set moving picks. They think that, on balance, the benefits of getting away with 15 effective moving picks far outweigh the costs of the occasional call.

I am delighted that one of those occasional calls may have cost Riley, Ewing, Rivers and Jeff Van Gundy the 1994 title. After splitting the first two games in Houston, New York had three home games in a row to win the title. In the final 30 seconds of Game 3, the Knicks had the ball trailing by one. Ewing tried to free a teammate with his patented moving pick, and the great Jake O’Donnell nailed him, giving the ball back to the Rockets, who held on to win. The Knicks won the next two comfortably, but they were now out of home games. The classy Olajuwon led the Rockets to two more victories and his first ring, and the New York bullies were the losers they so richly deserved to be.