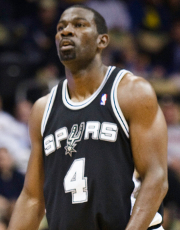 "U left me off the free agency list #notdoneyet"

That was the message two-time All-Star Michael Finley sent to HoopsHype's Twitter account early this week when he couldn't find his name on the site's list of best free agents available.

Following up on the tweet, Finley told HoopsHype Friday that's he's feeling healthy now and ready to return to pro basketball – in the NBA or elsewhere. The 6-foot-7 last saw action during the Celtics' Finals run one year and a half ago. Limited by ankle problems, he was little more than a bit player for the eventual NBA runner-up.

"When I went to Boston, my ankle wasn't 100 percent," Finley said. "So afer that season, I got my ankle worked on. I've been working hard to get that at 100 percent. I feel a lot better than during my time in Boston.

"With the lockout and the shortened season, I wouldn't be surprised if there's more injuries than usual since there's been not much of a training camp. I'm just working hard to be in shape and prepared in case an NBA team calls me."

While getting back in the NBA is obviously Plan A, Finley doesn't rule out playing overseas and even leaves the door open to a stint in the D-League – although it would have to be a special situation.

"I got offers from the D-League before (Ricky Davis or Greg Ostertag) ever thought about playing in the D-League," Finley said. "My thing is, I want to play basketball, I would enjoy playing in the D-League, but at the same time I don't want to take an opportunity away from a young guy to get exposure. I'm still thinking about it. If the right situation comes, where I could be something like a player-coach, maybe I would take that opportunity."

Finley said he will go to Dallas next week and plans to spend time with friend and former teammate Dirk Nowitzki. Needless to say, the former Maverick was ecstatic to see the German forward win the NBA title.

"I know the kind of criticism he got early in his career. I was happy to see him getting the type of recognition that the top players ever to play game get."

"I still talk with him very often – stuff on the business side and on the personal side. We're still good friends. A lot of people tried to put us against each other because of the way I left the team [Finley was waived]. I've never had a harsh word to say about Mark. I've always respected him. I consider him one of my better friends."