Tracy McGrady: "I didn't want to go to a team to chase a championship"

Tracy McGrady: "I didn't want to go to a team to chase a championship" 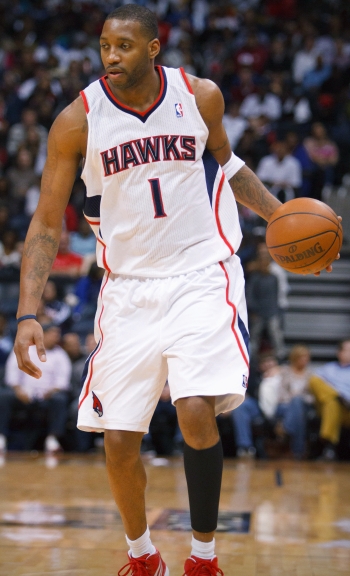 Having played now with four teams over the past three seasons, Tracy McGrady has become a basketball vagabond.

But perhaps McGrady, 32, has found a place where he can settle down for a while. Having signed last month as a free agent with Atlanta, McGrady is averaging 11.6 points in five games as the Hawks' sixth man.
It seemed like old times in the fourth quarter for the seven-time All-Star on Monday at Miami. In a 100-92 win, he scored 13 of his 16 points in the fourth quarter, making all three of his three-point attempts.
McGrady, who made $23.2 million as recently as two years ago and signed a one-year deal with Atlanta for the minimum, looks as if he could be a bargain for the Hawks. The swingman talked about the latest stop in his 15-year NBA career.
How is it working out so far with the Hawks?
Tracy McGrady: So far, so good. Just trying to find our way, find my way and mix in with this core group, which has been together for quite some time. So far things have been working out well. Just trying to find my way in.
How great did it feel to hit those fourth-quarter daggers against the Heat?
TM: It feels good. It's been a long time since I've had that feeling. My legs feel fresh. Everything just feels good. It feels right. And that's a good sign. I haven't felt this way in quite some time, probably since the beginning of my knee injury (in 2008). It's a great feeling. It's the reason why I came here. It's a great group of guys, just a great mixture of talent and vets and young guys.
What about Miami coach Erik Spoelstra remarking you're probably the healthiest you've been since your knee problems started in 2008 with Houston?
TM: Yeah, I am. Everybody wanted to get to basketball with the offseason being so long. But it gave me an opportunity to get in great shape and just strengthen my knee and bounce back from my knee injury that I suffered a couple of years ago. I feel good, and I'm in great shape, and it's paying off.
What did you do to bounce back?
TM: Nothing out of the ordinary. I just got back to my original offseason workout, something that I couldn't do for about two years because my offseason workouts consisted of just rehabbing. So I went back to doing that, and I feel good.
Having been a two-time scoring champion and a perennial All-Star, has it been difficult in recent years adjusting to being a role player?
TM: It happens to the best of us. It's something you have to accept. I'm in my 15th year. Some guys like Kobe (Bryant) and LeBron (James), those guys can stay on top for quite some time. But I suffered an injury and that kind of set me back a little bit. But it didn't keep me out of the game. I was able to sustain a great job and be on the team and help try to contribute toward achieving goals.
So it's not tough not being The Man anymore?
TM: Not at all. It was tough when it first happened. But I just looked at the bigger picture of being able to be on a team still and be able to play the game that I love and that's the most important thing.
Looking back on your time in Houston from 2004-10, does it disappoint you it didn't work out as well as had been hoped with center Yao Ming?
TM: I was very disappointed because I felt like we were a good tandem. We had talent surrounding us but we just couldn't quite get it together and play a full season with one another. It just didn't work out. I felt that the year (2009) that we faced Portland in the first round and then we faced the Lakers in the second round, when we took them to seven games, I was injured that year and Yao got injured in the Lakers (series). So I don't want to say it was bad luck. But it just didn't work out.
Why did you choose to sign with Atlanta instead of perhaps going to a team that is closer to winning a title?
TM: Well, I just wanted to go to a team where I felt like I fit in well. I didn't want to be one of these guys that's going to a team to chase a championship. That wasn't what I wanted to do. I felt like this was a great team with a great core and a piece like myself missing with Jamal Crawford not being here, that scorer that comes off the bench for these guys. I know he was leaving, so why not come here?
Last March, you had talked about playing five more seasons. How many more years can you play?
TM: Until the man upstairs lets me. I can play (five more years including this one). I feel good. As long as I keep my body in shape and I don't have to revert back to carrying a team.
What will you do after basketball?
TM: I have a few companies that I run. I have my own water company. I have my own technology company. I have kids. My (bottled) water company (in Florida) is BLUE04. My technology company is based out of Washington DC. It's called Dasdak. It's at Dasdak.com. Check it out. 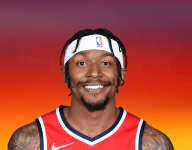 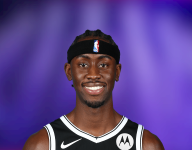