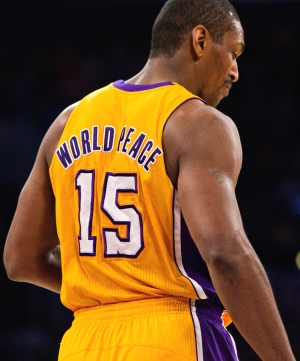 For example, on August 29, 2008, Pro-Bowl wide receiver Chad Johnson legally changed his name to Chad Ochocinco. Ochocinco, or the number “85” in Spanish, was Johnson’s jersey number and his long-time nickname. This name change followed a down season, one in which he caught only 53 passes, after five prior seasons of catching 87 or more in each. Was the name change just for fun? Was it to entertain? Was it to sell jerseys? Was it to get Ochocinco’s name back in the spotlight, if even in the form of more antics? Johnson flirted with a name un-change (or surname reversion for those not into brevity) in early 2011, but he continues sporting the name Chad Ochocinco to this day.
Next, Ron Artest, NBA All-Star, Defensive Player of the Year and NBA champion, changed his name to Metta World Peace in September 2011 during the NBA lockout. According to his Wikipedia page, World Peace’s name change was inspired by Ochocinco and was "meant to inspire and bring youth together all around the world." In one of sports’ great 180s, the long-time bad boy (arrest history for domestic abuse and 86-game suspension for his part in one of the NBA’s ugliest on-court incidents of all-time) chose the name Metta for its Buddhist meaning of loving kindness and friendliness towards all. Approaching age 32, was Ron Artest finally making a commitment to grow up and to be a role model? Or was this name change a savvy ploy to sell more jerseys? Or to re-capture some of his fading limelight? Or was it led by a PR team looking to re-brand Artest’s image with an eye toward life after basketball?
While the motives of Chad Ochocinco and Metta World Peace may raise more questions than answers, this nascent trend is an interesting one in light of the fact that both the NBA and NFL have agreed to honor these legal name changes. What if an athlete changed his name to a company’s name or product name as part of an endorsement agreement? What if that athlete decided to change his name annually, based upon the highest bidder for his services?
While it is fun to think about, the sponsor would undoubtedly have to trust the stability of the sponsored athlete, as the company’s name or brand would become intimately intertwined to the athlete. So, while “’Starbucks’ shoots, scores, and wins the game for Team X!!” would be great “Starbucks was arrested this evening on suspicions of drunk driving” would be less than great. The players most willing to change their name might be the very players companies are least inclined to trust and the players not willing to sell out the family surname might be those in highest demand (e.g. Tom Brady, Kobe Bryant).
Finally, even if the athlete and company could come to terms and if the league would agree to honor the player’s name, the state legal authorities might refuse to grant the legal name change if it was made for ulterior motives or if it infringed on intellectual property rights. Nonetheless, there will probably always be a rogue state willing to allow liberal name changes. After all, on March 30, 2005, Golden Palace Casino won an eBay auction and paid Terri Iligan, a non-celebrity Tennesseean mother seeking to send her child to golf school, $15,199 to legally change her name to "goldenpalace.com."
American professional sports leagues (excepting NASCAR) do not currently place sponsors’ names or logos on jerseys. Naming rights to an athlete, particularly one who played significant minutes and made significant news, could generate innumerable mentions for sponsors and reach innumerable consumers. While this form of endorsement is not likely to become commonplace, it is interesting to consider.
What if LeBron James and Dwyane Wade changed their names to “Proctor” and “Gamble”, respectively, or “Barnes” and “Noble”? Or what if LeBron were to be named “Coke” while Wade were to be named “Pepsi”… How much would those naming rights go for and would that sum be worth the endorsements that these athletes would likely lose from other companies not wanting to hire men named “Coke” and “Pepsi”?