Washington dealing with another frustrating season

Washington dealing with another frustrating season 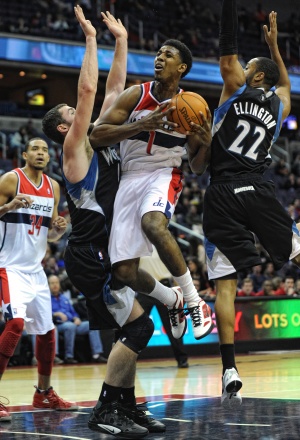 At least there is a plan.

That is the only thing that Washington Wizards fans can be excited about these days. The Wizards fans can only hope it leads to a better future, because the present is awfully bleak. Washington is rebuilding with young players, clearing as much salary as possible and then hope to work their way up that difficult NBA ladder, where moving from non-competitive to serviceable is still a huge leap. Even though the Wizards are losing, at least this is the way to do, or at least it seems so.

The only thing worse than what the Wizards are doing, is to lose with an aging team, one that is cap-strapped for many years.

The Wizards are clearing the deck salary-wise. According to HoopsHype salary figures, the Wizards have slightly more than $46 million committed in salary next year. However, the Wizards never used their amnesty option and could do that if needed. Rashard Lewis will be on the final year of his contract that was originally signed with Orlando. He is scheduled to earn $23.79 million next season.

Slice that off and the Wizards are in great cap shape, if not basketball shape. This year’s cap is $58 million. If it is around that total next year, there could be money to spend, but the question is will any free agents even look in that direction?

Players still go for top dollar, but the difference-makers want to win, not rebuild. According to a Wizards official, the team’s average age is 25.5. There are some nice young components but, as the record suggests, not enough.

One source said that despite the horrid start, coach Flip Saunders may not get thrown overboard without a preserver. We’ll see how that one develops. Management wanted some of the dead weight thrown aside and is looking for the young players to develop, giving some hope for the future. Still, it hasn’t been easy going through this so-called rebuilding phase. At this writing, the Wizards had lost 11 of their first 12 games.

“It’s tough right now,” said leading scorer Nick Young, who signed a one-year qualifying offer for $3.7 million, making him an unrestricted free agent in the summer. “We just have to try and stay positive you know and find something to get our spirits going. We have to keep staying focused out there because we know nobody is going to take it easy on us.”

Whether Young remains part of the future remains to be seen. Is he a player who scores points due to taking a volume of shots? Is this somebody who makes his teammates better? Those are the questions the Wizards will be asking. Actually when discussing the Wizards, the most desired possession is second-year point guard John Wall. He is an explosive player, with tremendous talent, but one is prone to turnovers and one has to wonder how much the losing is beating him down.

In a recent weekend two-game sweep of Washington, the Philadelphia 76ers said their priority was to have as many bodies around Wall as possible. In other words, allow others to beat them.

Wall responded with 14 assists and 13 turnovers in the two games.

He talked about how difficult things were in a 103-90 loss to Philadelphia, but Wall actually could have been speaking about just about any Wizards defeat.

“Sometimes it gets too cluttered and I couldn’t find lanes to penetrate,” said the 21-year-old Wall. “We need to get more space in there to make it easier for me to find my teammates.” 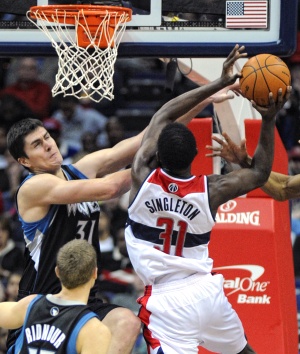 Teams aren’t going to give the Wizards more space because there aren’t enough players to be feared on the roster. JaVale McGee is known for his outstanding leaping ability and the 7-1, 260-pound center soon turns 24. Adding consistency to his game will be the key.

Chris Singleton, one of this year’s first-round picks has come in and provided the type of defensive presence that was advertised. The Wizards’ higher first round pick, 6-11 Jan Vesely, was injured early in the season and is finding his way.

For now, there are limited pieces to build so Saunders has plenty of teaching to do, frequently in games. He has to walk the fine line of making the players accountable for their mistakes while not shattering what little confidence that may exist.

“I think it’s probably reaching the point where it is the best thing that can happen,” he said about lifting players for shoddy play. He said there is a difference between being aggressive and downright careless.

A lot of those shots, whether contested or not, aren’t going in. For now the biggest challenge is to make sure the young players continue to work hard and don’t get beaten down by one L after another.

Because even a shortened NBA season can be a long one when a team digs itself into such a huge hole so early in the year.