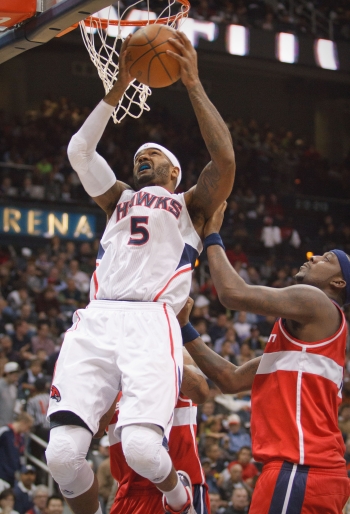 This year we are seeing less of Josh Smith and it actually could change the career of the eighth-year Atlanta Hawks forward, possibility vaulting him to his first All-Star selection. Smith has never been short of potential and he has enjoyed a solid NBA career, but there have always been the questions – such as what if?

What if he brought the same intensity on a nightly basis? What if he played to his strengths, instead of insisting on hoisting some ill-advised treys? What if Smith could transform himself into more of a leader, in addition to an all-around player?

Smith must have been asking himself these questions as well and he simply determined that less would be more.

So he entered the season having lost 25 pounds and now the 6-foot-9 Smith looks chiseled at 225 lbs.

“His discipline that he has shown over the summer in losing that weight and you can clearly see his energy level has gone up losing that weight,” Hawks coach Larry Drew said before a recent a game in Philadelphia against the 76ers. “He was a man on a mission when he came back and you clearly see it and thus far he has had a phenomenal year.”

The Hawks had won 11 of their first 16 games and Smith was filling up the stats sheet, averaging more than 16 points, nine rebounds, three assists and nearly two blocked shots per game.

Just like the weight, less has meant more when it comes to his perimeter game, specifically from beyond the arc.

Even in an abbreviated sample as the postseason, Smith shot 3 for 24 (.125) from beyond the arc in 12 playoff games last year. This season he had attempted 11 treys in the first 16 games. The fact that he hit only one, may convince Smith to consider bringing the attempts down even further.

Still, for much of his career, people have focused on what Smith can’t do, instead of what he brings to the table.

Since he jumped to the NBA right out of high school, it must be remembered that Smith, while in his eighth season, turned 26 in December. His is now entering his prime years, a much wiser player and one intent on taking that always-difficult next step.

Smith has talked a lot about his weight loss, but he wanted to make one thing clear. He was never out of shape.

“I always have come in training camp in shape, but I always was playing one position, the four,” he said. “You have to play with a certain kind of weight to match with the physicality of the fours around the league.”

Last year during the postseason, Drew began also using him at the three, and Smith found himself trying to keep up with some awfully fleet small forwards.

“There were definitely some obstacles,” he said about guarding threes.

Fighting off pick-and-rolls and staying with his man was among the challenges he faced.

Smith realized if he were to defend smaller, quicker players, he had to get a little more spring in his step. And the best way was to enter the season a little trimmer.

While his statistics are also healthy, he brings some awfully important intangibles. Smith is an effective defender, against both small and power forwards these days.

“He has really done a phenomenal job in guarding bigs and guarding smalls,” Drew said. “We put him in situations where we put him on smaller guys and he is locked in and has gotten the job done.”

And then there is the reverse side. Whether it’s a power or small forward, the opposition has a difficult time guarding Smith.

“He is very explosive around the basket,” Sixers coach Doug Collins said. “…He is definitely a very difficult matchup for us.”

While Smith has fielded questions about his weight, the subject of the all-star game is also being discussed.

The Hawks two-time all-star center Al Horford is out for three to four months (which could be the season) with a pectoral injury suffered Jan 11, but even before the injury, Smith had conjured up early all-star sentiment.

For now, it’s a topic he’d rather not delve into.

“I am staying focused and I am not really keeping my ear to media and what people are saying,” Smith said when asked about a potential All-Star selection. “I keep playing my game and not letting anything affect me positively or negatively and I’m just trying to help my teammates get to another level.”

While Smith is reluctant to talk about his All-Star chances, Drew says that he certainly hopes All-Star consideration comes his forward’s way.

“He is playing with high energy and the level in which he is playing he should certainly, definitely be considered as an All-Star,” Drew said.

Smith is looking more toward the postseason than the midseason. Last season the Hawks earned a first round playoff win over Orlando, only to lose in six games to Chicago in the Eastern Conference semifinals.

That only intensified Smith’s goal of winning an NBA title, which he says remains his goal. He said he felt the Hawks took an important step in getting to the second round, but…

“We took Chicago to six games and felt like we could have been a little more competitive, but Joe (Johnson) was a little banged up but that is no excuse,” Smith said. “It put a lot of fuel in our bellies into the offseason to take that next step."