Howard is way better than Bynum

Howard is way better than Bynum There’s no question that Dwight Howard and Andrew Bynum are the best centers in the NBA. And, contrary to the overblown opinion of Shaquille O’Neal, it’s also beyond doubt that Howard is far and away better than Bynum. Here’s why:

Howard measures 6-foot-11 and 265 pounds. In the other corner, Bynum is 7-foot and 285 pounds. Bynum may be longer and weightier, but Howard is much stronger. Whether on offense or on defense, Howard simply commands much more acreage.

According to the latest available statistics, Howard averages 16.0 rebounds per game as against Bynum’s 13.2. Part of Howard’s advantage is due to his playing 38.4 minutes per to Bynum’s 34.1 – the former snags a rebound every 2.4 minutes, the latter every 2.6 minutes. However, DH gets off the floorboards quicker and higher than AB, and his sphere of rebounding influence is much wider. In fact, Howard is at least a five-space rebounder, i.e., his range is four body spaces in all directions, whereas Bynum is at best a two-space rebounder.

Neither player excels in throwing post-rebound outlet passes, although Howard has a slight edge here.

Here’s a misleading stat: Bynum puts up a shot every 2.7 minutes of playing time, whereas Howard shoots once every 2.9 minutes. The difference is that, because of his inept performance at the stripe (46.7 percent), Howard is often deliberately fouled in the act so the resulting shot does not count. Bynum makes 5.3 appearances per game at the foul line to Howard’s 12.2. No wonder Howard puts up 20.1 ppg and Bynum only 15.9.

Also, whereas Howard is the Magic’s go-to scorer, LA’s fail-safe point-maker is Kobe Bryant. The only caveat here is that because of Howard’s miserable free-throw shooting, he’s seldom given the ball in the pivot in clutch situations.

Except when he has a straight-line route to the basket, Bynum will always make an initiatory dribble and fake in one direction, and then use a spin or a drop step to reverse his move. Howard, meanwhile, can either make a similar reverse-move or make a determined power-move taking either hand to the middle, looking for a hook shot. Howard will sometimes incorporate a double-fake in his effort to score, something that Bynum never does.

Bynum does, though, have slightly better shooting range and, indeed, has a short ten-foot jumper in his arsenal. During the early part of last season, Howard was routinely facing up and unleashing bank-shots from the same distance. However, this experiment has long since been abandoned and Howard’s low-post offense is always in an attack-mode.

In addition, Howard is able to establish and maintain better pivotal position. Because Bynum’s center of gravity is much more elevated, smaller defenders can apply pressure to his legs and hips and force him to move a critical step or two away from the rim. Bynum’s trouble at the stripe (54 percent) also makes him an untrustworthy option in the endgame.

Overall, while Bynum relies on length and finesse to score, Howard plays bigger and with more power. The only effective passes that Howard can complete when he’s crowded in the pivot are simple deliveries to a teammate positioned at the top – where a subsequent and successful jump credits Howard with an assist. Hitting cutters in close quarters is beyond his capabilities, which is why the Magic rarely send players hoopwards when Howard is being doubled. Most of Howard’s turnovers result when he tries to force his dribble into a crowd.

Bynum is slightly better at hitting dive-cutters. But his footwork isn’t as decisive as Howard’s, so savvy defensive teams crowd his foot-space and bring helpers from the weak-side in anticipation of Bynum’s inevitable reverse-moves.

OTHER CONSIDERATIONS ON OFFENSE

Howard sets and hold better screens, and is quicker and more forceful on post-screen rolls. Howard is also faster in defense-to-offense transitions, looking to run straight to the basket, turn-and-seal, and get easy shots before the defense can get set.

Bynum is often too hesitant when he has help responsibilities on opponents’ ball penetrations. Should he make a full commitment to the ball? Or keep in touch with his man? What he should be doing is what is known as “Show and Recover” – make a convincing and menacing move to the ball-carrier while keeping his balance so that he can still retreat to his man if a pass is made.

Howard meanwhile is naturally quicker to the ball, so he can wait until the last split second before making a full-bore attempt to either block or discourage a shot in the paint. Which is why he’s a more effective shot-blocker (2.2 to 1.8) and is a perennial selection to the All-Defensive five.

However, smart veteran teams can successfully move the ball quickly and strategically enough to sucker Howard out of position and leave the rim undefended.

Neither Howard nor Bynum is outstanding in defense of opponents who can, turn, face, and either shoot or go. Although Bynum’s long arms and high shoulders make him slightly better here.

Because Bynum mostly relies on his size and length, he generally plays reactive defense and is therefore highly susceptible to being in foul trouble. On the other hand, the league’s referees have become used to Howard’s bump-and-shove defense and allow him much more leeway.

Howard always plays hard, something that Bynum doesn’t always do. Howard is durable where Bynum’s history is plagued with serious injuries. Howard is always active and decisive where Bynum is often hesitant.

Overall, it’s no contest. If Howard is Superman, then Bynum is merely Batman. 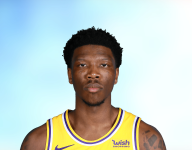