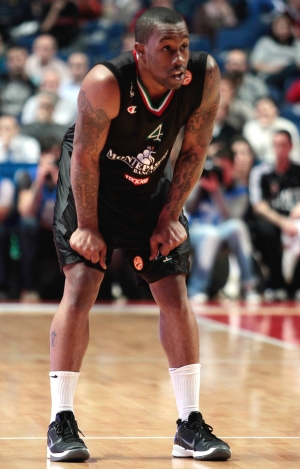 After a wildly successful Eurobasket where he led little-known Macedonia to the fourth position, Bo McCalebb is now back tearing up the Euroleague with high-level play for Italian powerhouse Montepaschi Siena. The New Orleans product is again one of the top scorers in the competition and was just named MVP of the Week after finishing with 25 points vs. Real Madrid last Wednesday.
The success he continues to experience in Europe is sure to draw interest from the NBA next summer. The explosive 6-foot guard could help a lot of teams bringing a scoring spark off the bench. If you ask McCalebb, though, the NBA can keep waiting for him.
"I'm going to be in Europe next season," McCalebb told HoopsHype. "I've had success in Europe and I want to build on that. I'm getting comfortable here and maybe it's not the right time to leave right now."
The 26-year-old McCalebb began his career overseas with obscure Turkish club Mersin Buyuksehir after going undrafted in 2008, but quickly made the jump to Partizan Belgrade, one of the most prestigious clubs in Europe.
Last season, he joined Siena and made it to the Euroleague Final Four for a second time in a row. Although he reportedly drew interest from China, McCalebb is playing his second year in Italy and enjoying it.
"The first season was kind of hard because it was my first time in a small city," he said. "But now I'm used to it and feel very comfortable. Everybody recognizes me in the streets, but it doesn't bother me at all. I like to talk to people."
At this point of his career, McCalebb is pretty well known far away from the streets of Siena. His great play for Partizan Belgrade, Montepaschi and Macedonia has made him a household name in Europe. McCalebb still feels underappreciated in the States, though.
"I've been kind of the underdog my whole career," he said. "Even coming out of college, NBA, whatever… It was like 'He can't do this, he can't do that'. I listened to what they say and it that made me work harder.
"I'm not an underdog in Europe, but as far as NBA goes, yes (I am). But there's nothing I can do about that but keep working hard."
Against all odds, McCalebb may play at the Olympics before he gets to play in the NBA. That's if Macedonia earns one of the three final spots in the qualifying tournament to be held in Venezuela next July.
It's not out of the question that McCalebb, an African American who got the passport of mostly slav Macedonia without knowing much about the country, could be the flag bearer at the opening ceremony if the National Team makes it to London 2012. There certainly would not be a more popular athlete in the Macedonian Olympic delegation. McCalebb laughed at the notion, but he's serious about the challenge ahead.

"It would be great to play in the Olympics, but we still have to play a lot of games first," McCalebb said. "We'll see."