Griffin will star when he becomes grounded

Griffin will star when he becomes grounded

Clippers forward Blake Griffin is proving to be the best player above ground, but if he is to become the next Karl Malone/Charles Barkley he must learn to navigate on the ground as well. The dunk he had over Kendrick Perkins the other day is definitely impressive, but in the world of players who hunger for points and long careers that method of success is short-lived and dangerous.

In my top 25 list, I talked about how Griffin dominated my AAU high school team as a 17-year-old and had 12 dunks within the first 10 minutes of the game. He basically has the same body build now. The individual skills have improved, but what I am looking to see is a player that can catch the ball in the scoring area and make a simple move to score. He is a combination of Malone and Barkley wrapped into one and that move could be devastating for many years to come.

Malone would catch the ball, face up a defender and take what he gave him. If the defender played up on him, he would take one dribble and overpower him. If he backed off, he would knock down a lethal 15 foot shot. That's extremely simple and saved him loads of energy, which allowed Malone to play a ton of minutes (37.2 on average).

Also those basic on-the-floor moves saved his legs and kept him out of harms way. He only missed a few games to injury while playing in 1,476 during his tremendous career.

Barkley became one the best scorers and passers ever at his position and yet he started out as a high flier and steamroller. Early in his career, he would challenge any defender in the air and would try and smash guards who dared to pick up a charging foul on the ground.

Barkley's MVP season in 1992-93 was totally opposite of the way he came into the league. He played cerebral and did most of his damage below the rim.

I have seen a lot of highlight reel players and every one of them eventually had to play grounded – most notably Michael Jordan and Dominque Wilkins.

Griffin has the same tools, but it worries me that he has accepted the hype of the posterizing dunk. He already should be cautious just based on the season-ending knee injury he had his first year in the NBA. Blake should realize that Kendrick Perkins will be waiting next time and he will be ferocious. Same with every other big man that saw the ridicule after that tremendous dunk.

I'm not suggesting that Griffin should stop tearing down the rim. I'm just saying that way of life is overhyped and short-lived among superstars. Coach Vinny Del Negro should be preaching to Griffin that consistency below the basket will establish his dominance in all phases of the game.

I would be showing him constant video of Malone and John Stockton or Amare Stoudemire and Steve Nash.

Griffin is shooting 51 percent from the field, but only 43 percent if you take away the dunks. Also, he hits just half his free throws. These are not numbers that will help the Clippers come playoff time. Dunks are not as easy and free throws win games in the fourth quarter, which means he will be fouled excessively late in games thus putting his coach in a precarious position in regards to running crunch time plays for him.

These are areas where Griffin will improve. Just look at Malone’s struggles his first few seasons at the free-throw line (48 and 59 percent) as proof. 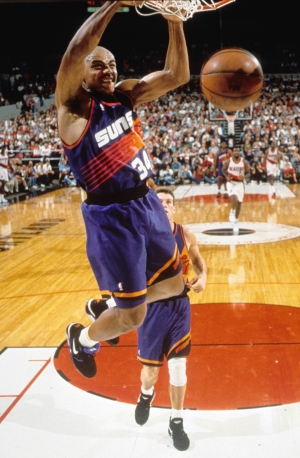 He already is a better ballhandler and passer with a career average of 3.6 apg. Malone and Barkley didn’t hit those numbers right away and that lets me know that from a skill level Griffin has an advantage. But will he stay healthy by being smart enough to reach the potential of those two greats?

He definitely proved his intensity and will by coming back last year with a stellar performance after missing his first season due to a terrible knee injury.

He definitely proved to us all that explosiveness can be enhanced despite setbacks.

I love his demeanor on the court… It’s a sneaky nastiness that makes him seem like the victim during most confrontations. Most importantly, I enjoy his unselfishness towards teammates and that definitely mirrors Barkley.

Chris Paul obviously will make his ascension to superstardom a lot easier, but didn’t Barkley have Mo Cheeks and Kevin Johnson? I assume Stockton made things somewhat simple for Malone as well.

The sky is the limit for Griffin, but growth will be stunted if he fails to add a pick-and-pop 15-foot jumper, a few more post-up moves and navigate double teams? Once he does, Griffin will become virtually unguardable like his predecessors.

The Clippers are a playoff team and are capable of winning the Western Conference, but a few things will have to fall in place. Griffin and DeAndre Jordan will have to get better from the free-throw line. Caron Butler has to stay healthy. Chauncey Billups and Mo Williams have to co-exist and realize whoever has it going will play in crunch time. They need to add a veteran backup big man after the All-Star break… And obviously allow the Paul-Griffin duo to continue to grow. If that happens, the Clippers will dominate the city of Los Angeles for the next 10 years and win a championship, which was unthinkable until Blake Griffin came to town.