Bismack Biyombo: "We believe in Silas"

Bismack Biyombo: "We believe in Silas" 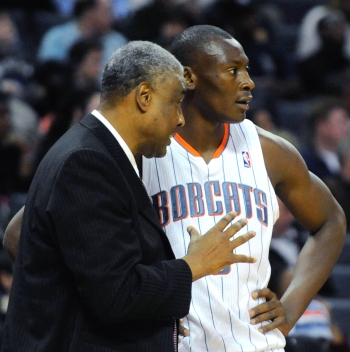 How are you feeling playing so many games?

Bismack Biyombo: Good, I have a good rhythm. We've been so much time without playing, like six months or so, and then all of a sudden it was a surprise that we had to start playing. So the players that were ready, they are feeling good and the rest don't. I've been practicing all the time to be ready to face this challenge. I practiced with former player Marc Jackson, who helped me a lot.

How are you getting used to your new life in the United States?

Bismack Biyombo: Good, good, enjoying it, it's wonderful. I'm living my dream and I'm getting paid for it, so it's the most beautiful thing in the world. I can't complain about anything. All we can do now is work harder to get better results as a team.

Bismack Biyombo: It's been tough times and we can't relax because we're losing so many games. Losing is part of the game and we must learn from that. I practice as hard as I can. Every day, I am one of the players that work the hardest. I know things will change some day for the better. We're here to work and improve.

But lately the losing has become even more gruesome, with the worst loss in franchise history after getting destroyed by the Blazers in Portland. Are you guys behind coach Paul Silas?

Bismack Biyombo: Yes, we believe in Silas. We have some injured players, although that is not a excuse. It's a very difficult situation. It's complicated to say that tomorrow or the day after tomorrow we will win. He always says that the most difficult thing is winning. He's been there, he knows how it is to be in a winning situation. Although we have injuries, we must stay optimistic, keep working. Yes, we have lost some games by a lot of points but it doesn't mean we don't care. We lose, we practice the next day and we do our best. Personally I'm impressed about how hard we're practicing. It's true that is frustrating that we're losing, but with our effort I'm sure we will win again.

Are you guys concerned that some major moves will be done before the trade deadline in March?

Bismack Biyombo: That's difficult to say, we don't know what will happen. We control what we can. We have to keep working.

So the chemistry is good? It's not like what happened in Washington, where it seems the players had tuned out Flip Saunders?

Bismack Biyombo: We don't have that problem. At the beginning of the season, we lost games but we were close to getting some wins. We competed against Miami, we won against Milwaukee at home… Then we had some injuries that killed us, but we know it's not an excuse. 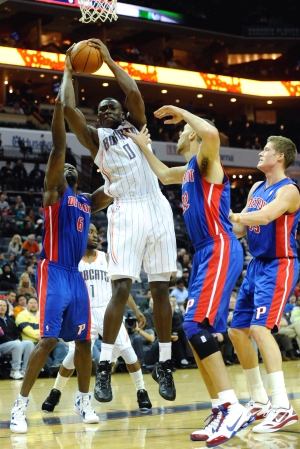 You're averaging 12.7 minutes per game. Another player who came to the NBA after playing in Spain, Serge Ibaka, played 18.1. Do you expect to play more after the All-Star break?

Bismack Biyombo: Well, you know, when you arrive in the NBA, you expect to play a lot of minutes. I think I can help the team, but you can't control what the coach decides. He is the boss and he tells you when to play and when to stay in the bench. What I can control is improving my game every day. We can't be all day saying 'Well, the coach doesn't give me minutes,' things like that. That's an excuse. There's been some games when he had confidence in me, like the double-double I had against Orlando. I have a lot of confidence in me so good things will come. The little time that the coach gives me I have to work hard.

Do you expect to be a starting player in the near future?

Bismack Biyombo: Yes, of course. I have that kind of goal to be a starting player in the near future, but in my opinion you have to work and deserve to be a starter. I will continue to work hard to achieve that goal, and I'm sure I will be a starter because I will work hard.

You're showing some impressive things already, averaging 1.4 blocks per game. Is the shot blocking the aspect of your game that you are most proud of?

Which is the player that has impressed you the most?

Bismack Biyombo: Kobe Bryant and LeBron James. They control the game. They know how to play. After them, nobody has impressed me. But I'm not afraid of them [laughs].

You had to overcome a lot of problems before getting drafted by the Kings with the No. 7 pick. Back problems, the buyout with Spanish club Fuenlabrada… and the age issue. How did you feel about all that?

Bismack Biyombo: When I got to the U.S., I took all the necessary tests, the wrist test, to confirm my age. And there was no doubt about it. And that's why I got drafted. They are doctors and they know my age. I think a doctor in Detroit explained that. Some people believed me, others didn't. I can't do anything about it. At first, it was hard but later I got used to it and I kept working.

What can you tell us about the time you played in Yemen?

Bismack Biyombo: I left my country and I got there and it was another world for me. It was my first time out of my country and I missed my family and friends. My father and my brothers, they gave me the strength to succeed there and then go to Spain. I had to fight a lot ever yday, facing difficult challenges there. Things that I haven't experienced in my life. It helped me a lot to grow as a person.

What kind of challenges you had to face?

Bismack Biyombo: You know, there were difficulties because of my religious beliefs. I'm a Christian, and sometimes Christians and Muslims don't get along… But at the end it was a great experience.