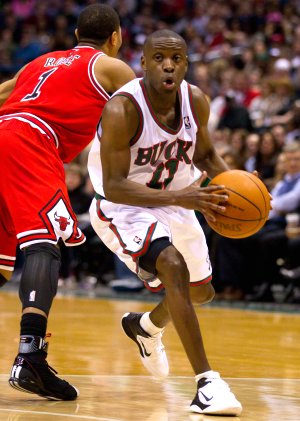 Several veterans that have been consistent contributors in the NBA in recent years have been left on the outside looking in as the regular season began. Few of them have had more success in the NBA than pint-sized guard Earl Boykins. Unlike Gilbert Arenas or James Posey, though, Boykins is no stranger to this position. This is the fifth time he's waiting for that call as a free agent with the NBA season underway.

At just 5-foot-5, Boykins has had to fight perceptions thoughout his career, often being looked as a short-term fix rather than a building block for a team. Confident in his skills, Boykins is not sweating the situation.

The 12-year veteran, who averaged 7.2 ppg and 2.5 apg with the Bucks last season, was invited to training camp by several franchises, but with no guarantee that he'd make the final roster he decided to wait at home for a good fit. Boykins confirmed reports that he came close to signing with the Orlando Magic last week and says he's now in conversations with other clubs.

Boykins, a journeyman that has played in 12 cities during his pro career (including stints in the now defunct CBA and the Italian League), only found real stability in Denver. The Nuggets gave him a multi-year contract worth nearly $11 million in 2003 after a strong performance with the Warriors, where he was a backup for fellow free agent Agent Zero.

"I think coach George Karl was the coach that understood better what I bring to the table," Boykins said. "He wasn't afraid to let me be me, let me go out and play basketball, he wasn't afraid to give me the ball in crunch situations, in big situations in the fourth quarter. He was the coach that I was around the longest and he put me in a position to show what I can do on a nightly basis.

"It would be nice to return to the Nuggets, but right now I just I want to go to a team where I can contribute and play and have a chance to compete in the playoffs. Also I have the goal to have the chance to win the championship."

Although obviously not gifted with typical NBA size, Boykins is not lacking in strength – he is reportedly able to bench press 315 pounds – or durability. While most of the players selected in the 1998 draft, where his name was never called, are now retired, Boykins is still going strong at 35 and believes he has three good years left. He's not short in self-confidence either.

"I always believed I could play in the NBA. I always knew I had a great understanding of basketball. That's what has allowed me to be successful and play for as long as I have in the NBA."