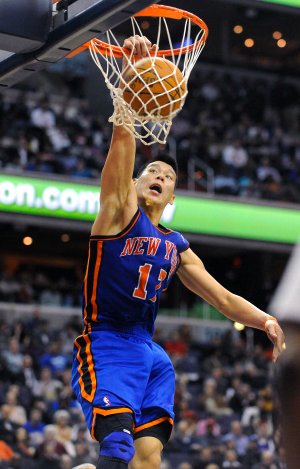 By now the details of Jeremy Lin’s unexpected transformation from being an undrafted non-entity to being an instant legend are well known. Indeed, he capped his sudden emergence into greatness with a 38-point explosion as the short-handed Knicks defeated the Lakers on Friday night – New York’s fourth consecutive win since injuries and desperation forced Mike D’Antoni to make Lin the team’s starting point guard.
So what exactly does this Asian-American with a Harvard education do? And is there anything he can’t do?
OFFENSE
During the limited daylight Lin was given last season with the Warriors, he seemed to demonstrate that his shooting was not up to snuff. In 29 games (and 285 minutes) he shot only 38.9 percent including 1-5 from beyond the arc. This perception was reinforced when Lin was only 3-15 from out there before the Lakers game. But shooters need to have their numbers called in order to develop and maintain their accuracy.
With Golden State, Lin averaged one shot for every 3.7 minutes of playing time. During his five starts with the Knicks, the numbers are one shot every 2.1 minutes.
No surprise, then, that LA’s initial strategy was to go under every screen and give Lin room enough to fire away from the outskirts – a strategy that backfired when he bagged half of his four bonus-point shots.
So, too, after bricking his initial mid-range jumper, Lin converted 3-5 of these, showing good form and a soft touch. It should be noted that all of these shots were launched after he had dribbled and pulled going right.
More spectacular were his buckets in the paint. To get into the belly of the defense, Lin employs swift crossovers (made even quicker because the ball stays below the level of his knees), a sudden change-of-pace, tight spins and extremely long strides. On one play that sent the crowd into delirium, Lin made a right-to-left crossover, then executed a sideways jump back to his right and finished the spectacular maneuver with a right-handed layup.
When Derek Fisher tried to play bump-and-bang defense, the savvy veteran was unable to either derail or intimidate the 6-3, 200-pound Lin. Nor did the shot-blocking presence of Andrew Bynum and Pau Gasol discourage Lin from driving to the rim and using both sides of the rim to make a variety of flippers and complicated layups. 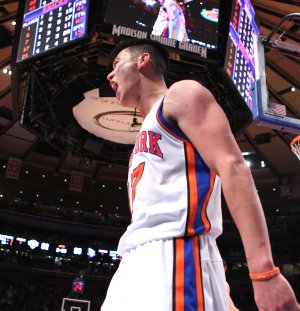 In other words, the young man is an adept finisher.
He was 13-23 from the field, and never forced a shot.
Lin is also an alert and willing passer. In addition to the seven assists he registered, nine other passes created uncontested (but misfired) shots for his teammates. Like Ricky Rubio, another early season sensation, Lin’s court-vision is extraordinary.
On the rare occasions when he was called upon to pass to a teammate who had curled off a weakside screen, Lin’s delivery was perfect – hitting the receiver’s shooting hand precisely at his release point.
That said, Lin’s stat line was also blighted with six turnovers. One of these occurred when he recklessly tried to split a too-tight double team and his dribble was tipped away. The rest came on a variety of ill-advised passes, i.e., an overthrown lob, two reverse passes that wound up in the stands, and two drop passes that were intercepted in heavy traffic.
It seems that as he gets more comfortable with starters’ minutes, Lin is taking more chances with the ball. While this is as admirable as it is inevitable, he needs to exercise a bit more discipline. At the same time, it should be remembered that Lin is virtually a rookie.
Room for improvement
Staying connected to the floorboards when trying to complete pinpoint passes among the trees. Becoming more of an attack-threat with his left hand. Developing a pull-up jumper going left.
Given Lin’s intelligence, perseverance, and work ethic, all of these flaws should be overcome as he gains more and more experience.
DEFENSE
He has quick hands and feet, and great anticipation. He can read passing lanes and knows when to offer help and when to switch. The charge Lin took late in the fourth quarter was instrumental in preventing the Lakers from mounting a successful comeback.
Moreover, Lin closes out perimeter shooters in good fashion, and does an adequate job when confronted with high screens.
Sometimes, though, he wandered too far from his man and was unable to get back in touch when the Lakers moved the ball quickly.
Overall, Lin wasn’t the defensive liability that he was always presumed to be.
Room for improvement
Although he can read defenses like a veteran, he sometimes misread offenses. Again, this is easily correctible as he gains experience. 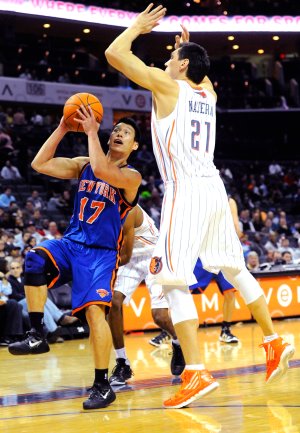 EXTENUATING CIRCUMSTANCES
The Lakers had engaged in a hard-fought overtime victory the previous night in Boston and were emotionally and physically drained. Bynum, for example, tallied only three points in 35 minutes. Plus, before Kobe Bryant got his chops up he missed ten of his initial eleven shots.
Also, neither Fisher nor Steve Blake look to score so Lin’s man-to-man defense was never really challenged.
Plus, Lin controlled the ball much more than he would have if Amare Stoudemire and/or Carmelo Anthony had been available.
PROGNOSIS
Overall, Lin’s performances in the four games he has started – against the Lakers, Wizards, Jazz, and Nets – have been inspirational. In so doing, he has rescued both the Knicks season and D’Antoni’s job.
However, just as the league has caught up with Rubio (by muscling him and forcing him to shoot under pressure), adjustments will undoubtedly be made to counter Lin. His right hand will be overplayed, he’ll have to prove that he’s a consistent long-range shooter, bigs will position themselves to protect both sides of the hoop when he drives, he will be attacked by shoot-first point guards, and his screen/roll defense will also be explored.
Even so, Jeremy Lin has the skills, the basketball IQ and the opportunity to eventually become a perennial All-Star.