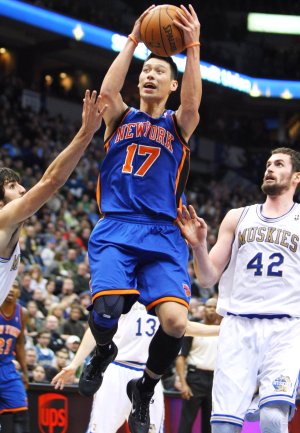 Q: It's early and I'm knee-jerking… But if the Knicks end up among the top teams in the East, does Lin win MVP? – @v_for_vince

A: That's obviously jumping the gun, but the fact that the question is somewhat legit at this point makes you realize how nuts the whole Linsanity thing is. A benchwarmer on a team with a losing record just two weeks ago is now brought up in the MVP discussion by fans. How crazy is that?

The good thing about the Lin phenomenon is that the hoopla is performance-based. Even with the high number of turnovers, Lin has been sensational for the Knicks. I just don't think he can keep it up. His body of work at the NBA level is still too small and we still don't know if he's a starter-type player going forward. I'm not saying he won't be one and I know most people want him to be and are rooting for him… But six fantastic games are a small sample. So let's put the MVP talk on hold for now.

Q: What will happen with Lin once Melo is back? – @alfpalomo

A: For the first time this season the Knicks have a good thing going and you have to think Carmelo Anthony is not going to mess with the great chemistry the team has right now. Then again, I expected him to play more of a team-oriented game when he got traded to the Knicks last season with a star already in town in Amare Stoudemire. It didn't happen. Lin is going to have to give up shots when Melo returns. Scoring seems to be his main strength, so he will be sacrificing a lot. Let's see what kind of sacrifices Anthony makes. I don't think New York fans will be upset if he stops going for the one-on-one play so often.

Q: Do you like Cavs' chances going forward? – @DMinoff

A: Cleveland has Kyrie Irving, who has the makings of a franchise player. That's a good starting point. The key will be the progress of both Irving and Tristan Thompson… and the team's success in the draft. You know the Cavs are unlikely to land a star in free agency, so they need hits in the draft.

Q: Which is more likely to happen? Arenas to Lakers or Iverson to Lakers? – @tyronemagararo

A: I haven't heard anything about the Lakers attending a workout with Allen Iverson, so I guess Gilbert Arenas is more likely. Agent Zero is not a true point guard, but I don't see how he could not be an upgrade over Derek Fisher and Steve Blake, who have been terrible so far.

Q: Can you explain Rondo? I can't decide if, overall, he helps or hurts his team. – @SolCollins

A: Seriously? Rondo helps a big deal. He has been one of the top point guards in the NBA for some time now. You often see him dominating entire games or outplaying point guards who get more headlines and accolades than him. The off-the-court persona may not be very pleasant, but you can't question his greatness on the court. It would be nice if he cuts on the turnovers, though. He's averaging a career-high 3.84 this year.

Q: Which of the teams chasing JR Smith needs him the most and could use him better? – @matias

A: I would say the Clippers. Shooting guard is obviously a position of need for the Clips with Chauncey Billups going down and JR Smith could fill in nicely. He's going to be around veterans like Billups, Caron Butler and Chris Paul who can put some sense into him. It's worth the gamble if you get him on a short-term deal, in my opinion.