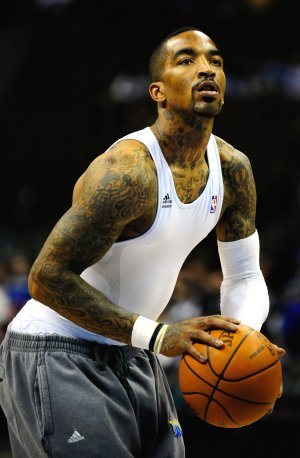 The New York Knicks are steadily improving their team with not much body movement compared to last year, when they virtually traded the entire team for Carmelo Anthony.

Jeremy Lin has been tremendous and has stabilized the point guard position in an offense that quite frankly should have been shelved until he was given a chance. Now, because of the decision to play Lin and be patient with him, the Knicks are playing consistent basketball and winning games.

The most glaring improvement will be the ability of Lin to satisfy teammates early in the shot clock before he delivers the ball to Anthony, who tends to squeeze the ball thus freezing teammates

That will essentially allow Amare Stoudemire to get better touches in rhythm, which makes him extremely dangerous in pick-and-roll.

Now couple that with a tremendous back-to-the-basket player in Anthony that will draw constant double teams and the Knicks become automatically a better offensive team than Mike D’Antoni had in Phoenix.

The Suns never had a great post presence and now when D’ Antoni’s offense gets bogged down, especially in a defensive-minded fourth quarter, he has Anthony to post up.

Who do you leave when Lin and newly acquired JR Smith are camped above the three-point line and Tyson Chandler is standing in the short weak side corner waiting for a lob to dunk?

JR Smith is a huge pickup because not only can make the three consistently, but when pressured off the three-point line he like Lin will be able to put the ball on the floor and attack the rim.

Smith automatically becomes one of the Top 3 sixth men in the NBA in regards to offensive production. The luxury of having a fourth player to go along with Anthony, Stoudemire and Lin who can score 30 any given night changes the Knicks into a team no one wants to see come playoff time.

The challenge for D’Antoni is convincing Smith he has to be accountable defensively because it would be hard to have him, Stoudemire and Anthony on the floor in the fourth quarter against the likes of Miami, Boston, Atlanta or Orlando.

He also needs to know there are three players – Jared Jeffries, Bill Walker and Iman Shumpert – that can be quickly inserted to defend when he is struggling making baskets and not holding his own on the other end.

When you add a high-volume scorer like Smith, you have to be extremely communicative in what his role will be and what’s expected so he understands he is fourth on the totem pole.

He has been known to get extremely emotional and D’Antoni is not a confrontational coach, so the value of having an ex head coach like Mike Woodson on the bench to buffer the tension that will surely develop between the two should keep the peace.

The Knicks are officially back on the map. And yes, it got started with its best player (Anthony) on the sidelines and Lin shining.

One has to wonder… Did JR Smith shun the Clippers and arguably the best point guard in the league in Chris Paul for a better contract in New York?

Or is he another victim of Linsanity?