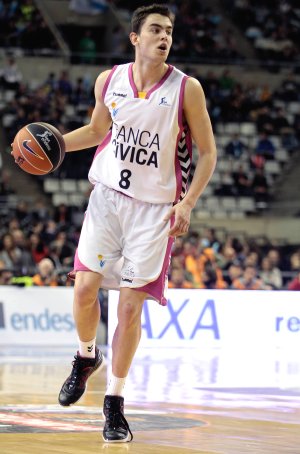 How much have you grown during the last year?

Tomas Satoransky: A lot for sure. Since I came to Seville till now, I have grown incredibly – first as a basketball player and also as a man. I came here like a child and now I feel like a man. You get big experience when you go to another country and meet new people. I've grown pretty much.

At which point did you see that you had to leave the Czech Republic to continue to grow as a player?

TS: I was doubting if I had to leave the Czech Republic the year before [I left]. The league is not so strong and I had offers from other clubs so I decided that it was time go there [Spain] and try a new life, learn another language through basketball, which is pretty good if you go through the experience. I had a clear mind about that.

TS: It's the best league in Europe. I knew some players that had had a good experience in Spain. So I decided to follow them and give it a try and I think it was a great choice.

Is basketball starting to become a popular sport in your country?

TS: I would say basketball is the third sport in the Czech Republic behind soccer and ice hockey. It's becoming more popular. Let's hope we can make it as a National Team too.

Where do you feel more comfortable on the court?

TS: I've played every position with the juniors, with with men's teams I can say it's playing the point guard spot. It's part of me now. Maybe in the future I can play the two or the three positions but now I feel like a point guard.

How much of a goal is it for you to play in the NBA? Is this something you're thinking about for the short term?

TS: I have thought about it a lot. The NBA is always my goal, my dream… It's because of me watching the NBA that I started playing basketball, but now I'm focusing on helping my team and hopefully get closer to my dream every season.

Would you say it is likely that you enter the draft this year?

TS: Well, there's always the option to enter the draft or to stay in Europe. I would say now it is 50-50, but all depends on how good you play, how you're feeling with your club, if you feel you have to grow more with your club the following season. I feel pretty good in Seville but, you know, like I said the NBA is my dream and I want to get it.

Your contract with Sevilla comes to an end this season?

TS: Right now I have the option to cut my contract. It was 3+2 [optional] years and now I'm at the point where I can exercise these [opt-out] options. I have my options and the team has options too, so maybe we will discuss something this summer.

Are you watching fellow Czech Jan Vesely much?

TS: I've been always a Laker fan, but now I'm a little bit of a Wizards fan even if they play pretty bad. I communicate with him. Sometimes I watch the games live or the highlights. He's getting more minutes and he's going to improve.

So you have a good relatioship?

TS: Yeah! We have a pretty good relantionship. We've played with each other a lot during our career playing with the Under 16, Under 18 National Teams. We have very good memories from those times.