Deron Williams fights through the losing

Deron Williams fights through the losing 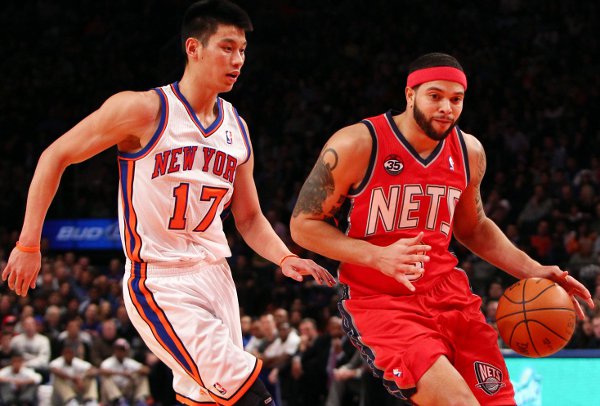 The losing has eaten Deron Williams up, but he keeps performing at the highest level. Performing in the anonymity outpost of the NBA called New Jersey, Williams has continued to show why he is among the game’s Top 3 point guards, even if people are not paying attention.

The Nets are 10-24 and have the second lowest home attendance (13,358). It’s a team anxiously awaiting next year’s move from Newark to Brooklyn.

And the key question is will Williams make the move along with the team? He has a player option for nearly $17.8 million next year.

Unlike other former free agents such as LeBron James and Carmelo Anthony, or a current one such as Dwight Howard, Williams isn’t allowing a circus atmosphere to surround his potential exit.

He’s just been about playing, not giving any updates on potential suitors. Williams is averaging a career high 22.2 points along with 8.2 assists and 4.1 turnovers. The last figure is a byproduct of sometimes attempting to do too much on a team short on talent.

“He’s been great in this situation,” a Nets official said. “He understands the situation but it’s been tough and he’s has continued to play great and lead a good example.”

How tough as this season been? Even Williams can’t mince words when asked.

“This has been one the toughest years, definitely the  toughest year of my career and one of the toughest years in my life just trying to deal with it,” Williams said following one of the best moments, his 38-point effort in a 100-92 win at Madison Square Garden against the New York Knicks. “I never lost at any level going back to middle school. It has definitely been a struggle.”

Yet to Williams credit there has been no bad body language. He has earned his third All-Star Game appearance and it’s on merit. The victory improved the Nets record to 10-24, putting a band-aid on a festering wound that this losing season has become.

“I’m learning to fight through things and trying to lead guys even though it’s not the best situation all the time,” Williams said. “We are playing better as it goes and learning how to play and developing guys.”

And so Williams tries to put a positive spin.

“So it’s still a fun process he says,” not so convincingly. “I just hope it’s not an extended process.”

The Nets have played all but one game without their second best player, Brook Lopez. The second best scorer has been unheralded rookie guard Marshon Brooks, who has averaged 14 points per game. Kris Humphries is averaging a double-double, but he is still so raw offensively. 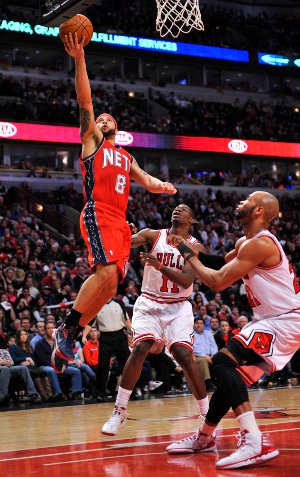 It’s truly up to Williams to carry the load.

What was impressive about the win over the Knicks is that it was the third game of a back-to-back-to-back sequence.

For one night somebody upstaged you know who for the Knicks.

Yes it was Jeremy Lin who had his first breakout NBA game against Williams and the Nets on February 4. Lin came off the bench to score 25 points and deal seven assists in the Knicks 99-92 win. That began the NBA’s No. 1 feel-good story.

Afterwards Williams heard the criticism, which fueled his motivation for the rematch.

“I am a competitor and when somebody says they destroy you and you watch the tape and you don’t feel you were destroyed, you circle those types of games.”

First off, when Williams said “somebody” he wasn’t referring to Lin. The people who said Williams was destroyed were many comments he received on his Twitter account.

And in that game he makes a point about not being destroyed. Williams did have 21 points six rebounds and 11 assists.

Yet nobody expects most point guard to outscore Williams, let alone a player who had not seen any previous significant time this year.

Williams said that Lin is a great story, how he has risen from obscurity to such prominence in such a quick period.

And in the rematch Lin did have 21 points, nine assists, seven rebounds and three turnovers.

And that doesn’t even begin to describe how Williams is playing.

He is listed as 6-foot-3 and 209 pounds and there may not be a stronger point guard in the league. Plus he has breathtaking quickness, especially when executing the crossover dribble.

His third quarter against the Knicks was one for the ages – 18 points, two assists, 5 for 8 from the field and 4 for 5 from beyond the arc.

“Anytime you get going like that you feel you can’t miss,” he said.

As Howard is getting so many daily headlines about his potential exit from Orlando, Williams just keeps performing in the background.

When asked if he is comfortable with the Nets plan for the future, he gave the obvious response.

“I am very comfortable,” he said. “There is not much I can really do but play basketball.”

He has continued to say that at the end of the season he will weigh how things are with the Nets and make his decision.

It’s obvious that he won’t stay if he doesn’t see an upgrade in talent because above all, winning matters the most to Williams.

Despite all the frustration and disappointment, Williams has maintained an All-Star approach and an All-Star game. In this losing season he has still proven to be a winner. Next year the actual wins should come, whether it’s with an upgraded Nets team or if Williams decides to move on.