Chris Bosh: "The ring is a bigger goal than the Olympic gold"

Chris Bosh: "The ring is a bigger goal than the Olympic gold" 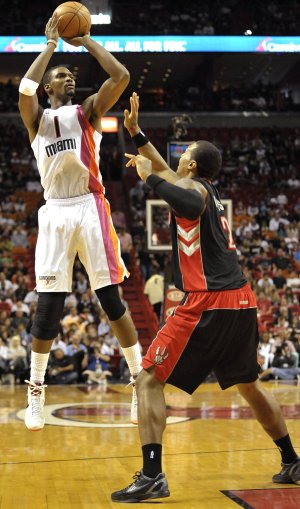 How were the days following your Finals loss against the Mavericks?

Chris Bosh: In a situation like that you never want to come up short, but it is what it is… We couldn't really do anything about that and the best thing that I felt I could do is just to move on, improve and get ready to the next season.

What do you think was the main single reason why you didn't win the title?

CB: I mean, there's no main single reason. It was our first year together, and I don't know how many first-year teams, brand new teams really win it all. It was a great learning experience for us. We just have to make sure that we learned those lessons as tough as they were and apply them to this year. I think so far we're doing a good job.

How much better do you think you are this season compared to the last one?

Where would you rank yourself among the best power forwards in the NBA?

CB: Up there, up there. You know sometimes those are things I don't concern myself with most of the times because I feel I am the best and everybody else does too. That's something very important. You have to have that supreme confidence in yourself. You can't really look at numbers because numbers don't always tell the story, but is all about competition and I'm just trying to improve every day to make sure that one day I'll be up there in those rankings.

Does it bother you that Blake Griffin or Kevin Love come up more than your name when it comes to naming the best power forwards in the game?

CB: No… I think it's all about in the postseason and how your perform there because that's when things get really tight, that's when the best of the best really compete. They are having fantastic years, they're very good players and they are in different situations that I am.

Do you feel you're a lock for the Olympic team this summer?

CB: I have no idea. There's so many great guys on that team… They are gonna have to make some tough decisions, but I can only play my best and hopefully I'll get pick. It's never good going into anything thinking you're a lock because you won't perform like you're supposed to.

CB: Yes. I have a gold medal, I don't have the other thing.

Assuming you make it to the Finals, which team you don't want coming out of the Western Conference?

CB: It doesn't matter. We can't think that far ahead now.