Tweetbag: For Sixers, time for bold move could be now

Tweetbag: For Sixers, time for bold move could be now 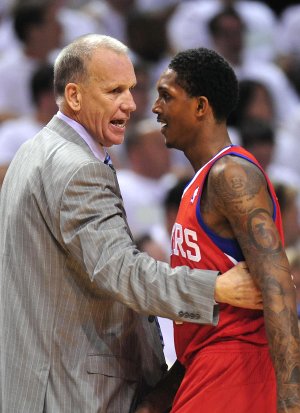 Q. For the Sixers, is it worth giving up any of their young talents to get a "star" when they'll have more money to work with in the summer? – @codyfrommyspace

Philadelphia has a good thing going and it's beautiful to watch. They have young athletic guys playing within a team concept, which is something you don't see very often in the NBA. If they give up on some of their young talent to land a star, it's going to be a painful decision because the chemistry has been so good this season. On the other hand, how successful can they become with this group? There's no star power in Philadelphia and toughness and cohesiveness can only take you so far. Philly is not a desired destination for the main guys in Free Agency 2012. If they acquire a star, it's much more likely to happen in the trade market. With the team playing well for the most part, they have several guys whose trade value is pretty high right now. The timing is good to make a bold move, in my opinion. I would always keep Jrue Holiday, though. He could very well become a star in his own right soon.

Q. Rondo's triple-double against the Knicks. Ends trade rumors or fuels them? – @Jose_LL_00

So hard to answer that one. When a player that delivers with such consistency on the court is constantly mentioned in trade rumors, you have to wonder how hard he is to deal with behind the scenes. He's a terrific point guard and I'm sure Danny Ainge will get a lot of calls inquiring about him. But that arrogance or aloofness about him is an issue that diminishes his trade value and may end up being a factor in the Celtics keeping him.

Q. Do you see Portland making any big-time moves? – @jccordano

That's very likely. Portland's season is going south, there's some turmoil in that locker room and they have a lot of trading chips. The Blazers are going to be one of the most active teams on the phones before the trade deadline, I'm sure. What we don't know is who's going to make and take the calls.

Q. Who do you think the Kings can get for JJ Hickson? – @JoseLara76

Not an awful lot. Hickson looked pretty good playing alongside LeBron James in Cleveland. He was a nice finisher for plays created by others there – usually LeBron himself. Then he put up nice numbers last year with the Cavs, although you could say that was by default. Somebody had to score and get the rebounds. But he's not having a good year in Sacramento and his trade value has to be at its lowest. Hickson went to Israel early in the season and didn't really behave like a pro there, then came to the States and is averaging just 4.9 ppg. To his credit, he's rebounding the ball well in limited playing time, but I'm not sure you can get much in return for a player that has apparently regressed.

Q. Do you think the Lakers should trade Gasol? And if they should, for whom? A playmaker? – @FuckingTreat

I would trade him, yes. What would I like in return? I would care more about age than position. Pau Gasol should have been an All-Star this season, but he has plateaued and, realistically, the twilight of his career should be just around the corner. If you can get a player on the upswing and with star potential in exchange of Gasol, I think that's good business for the Lakers. I just wouldn't do any move that compromises the future of the team. A short-term fix to have a better shot at the title this year would be a mistake if it somewhat hinders the team's flexibility going forward. The Lakers are not that close to contention right now.

Q. Would you agree that the Magic trading Howard to a Top 3 team in their conference is dumb? – @gspufc2011

The minute they trade Dwight Howard, the Magic are no longer in contention for anything, so it doesn't really make a difference to trade him East or West. They are probably not going to compete with the top teams in either conference for several years if that happens. Obviously, if you trade him to a team in your conference, he's going to be visiting Orlando twice a year. That's a painful reminder for the fanbase that you don't have to go through so often if you send him to, say, the Lakers.