Howard is making a mistake

Howard is making a mistake 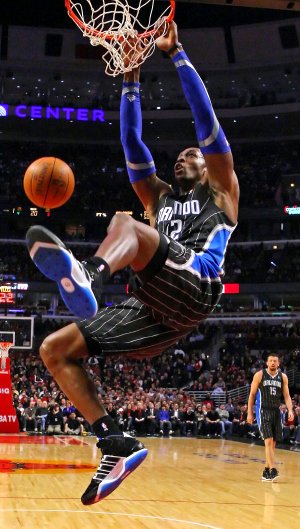 The Dwight Howard sweepstakes will be in full motion over the next few days and I believe Otis Smith is thinking of ways to keep Howard rather than moving him somewhere else.

Why?
Because they will lose no matter who they acquire in return. Superstars can't be replaced. Howard not only scores, but he rebounds and defends. He is basically three above average players rolled up in one.

This is Shaquille O’Neal all over again and it’s sad and disappointing because it’s not like playing in Orlando is dreadful.

Orlando has been a consistent winner. It is a wonderful city, which means it’s a destination for free agents. They have solid ownership and one of the best arenas in the world. It is a great place to raise kids. I mean, what kid would not want to grow up in Mickey’s backyard?

I continue to remind players the rainbow is not always brighter on the other side. The fans and city you want to leave know your positives and weaknesses and have learned to live with them.

Take Carmelo Anthony, for example. He longed to go back home to New York to cheers and applause and now those cheers are turning to doubt and boos because the fans only focused in on his offensive numbers and game-winning shots from afar, but now are looking at his defensive effort and volume shooting. Jeremy Lin, an unknown player from Harvard not long ago, excites the masses more than Melo. That would have never happened in Denver because his foundation and body of work was too deep.

Howard has to realize wherever he goes he needs help. He is only a dominant scorer if he has shooters and a decent point guard who have acclimated themselves around him. And even then, it does not guarantee a shot to win a championship because he has that scenario currently in Orlando.

Why does he think changing teams is going to allow him a different scenario in regards to winning a title?  Hmmm… Maybe it's not about a championship… Maybe it’s about getting to a bigger, brighter city to enhance of-the-court credibility?

If so, Howard will fail regardless of where he goes. LeBron James has caught a lot of flak for leaving Cleveland, but he did it as a free man. He didn’t make trade demands during the course of the season. He went out and won 60-plus games. Then he decided to spurn the bright lights of New York and Chicago and join a team that made it to the Finals. That was his goal. Howard, on the other hand, seems focused on the bright lights. How's that working for Melo?

Howard is looking at his peers move around and venture into new situations, but none of them have had a smooth transition other than Chris Paul… and the jury is still out on that move.

Howard should realize he will not do any better going somewhere else. Regardless of how he gets to the next team, he will lose ground in two areas immediately.
If it's via trade, the team he is joining will have to give up good players to get the deal done. Plus he will lose financially because Orlando can pay the most money.
So why not stay in Orlando and allow Otis Smith to get the best possible players around you and gain respect and attention as being the player that stayed the course with an organization that has supported you since your arrival?

This to me is much more attention-grabbing than making a splurge into another city. That will ramp up expectations you might not be able to live up to.

Quite honestly, when you only shoot 57 percent from the free-throw line you are not the go-to player on your team in the last two minutes. That by itself will alienate new fans in ways your Orlando supporters have learned to live with.

Howard should re-sign with Orlando and get under Shaq's skin even more. He has complained that he is the original Superman and not you. Well, if you stay and bring a championship to Orlando in the near future you will claim the title as Superman because you would have done something he couldn’t do.