Breaking down the trade deadline moves

Breaking down the trade deadline moves 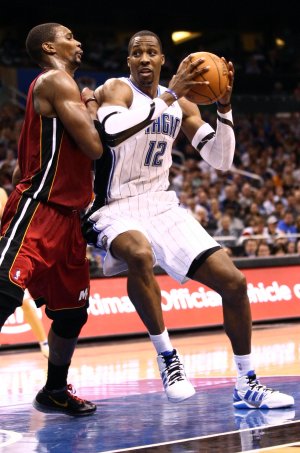 Dwight Howard has become such a ubiquitous and quixotic celebrity that he needs to market himself. How about a clothing line that features reversible pants, shirts, sweaters and jackets? Or he could endorse a manufacturer of seesaws. His corporate logo should be centered on a huge question mark. And his official theme song should be one that an old vaudevillian named Jimmy Durante used to croak: “Should I Go Or Should I Stay?”

And what’s with all the jibber-jabber about Howard’s “loyalty”? Suddenly he’s loyal? Suddenly he loves Orlando?

There were two major factors in Howard’s decision: Avoiding making a serious public relations mistake – like LeBron James did with his “Decision.” But also, methinks Howard was unduly influenced by Orlando’s defeat of Miami last Tuesday. The win undoubtedly led Howard (and his teammates) to believe that they could actually win the championship.

Too bad the Magic did nothing to improve their roster. Their powerless forwards – Hedo Turkoglu and Ryan Anderson – still can’t defend. Neither can JJ Redick, Jason Richardson (whose body is showing major signs of wear and tear) or Jameer Nelson. Which is why Howard has the opportunity to block so many shots. Plus, Glen Davis is still wearing diapers, and their bench is woefully weak.

The team’s defensive numbers are misleading: 92.6 points allowed (4th best in league) and .437 opponents FG percentage (ranked 8th). That’s because the Magic play station-to-station basketball that limits the number of shot opportunities for both them and the bad guys. And also because Howard’s interior defense and shot-blocking drastically reduces high-percentage shots in the lane.

With so many glaring weaknesses, there’s no way that Orlando can overcome Miami in a seven-game series. That is, if the Magic can get that far.

Unless Orlando survives the Eastern Conference playoffs, we can expect a repeat of “Should I Go Or Should I Stay” starting in July.

Let’s take a look at which impact players have changed uniforms and what their new employers can expect.

ANDREW BOGUT TO THE WARRIORS

Can Do: Rebound at both ends of the game, pass, take up space in the paint. Score in the low-post, his favorite move being his lefty baby-hook. If the ball is carried into his sphere of influence can also block shots.
Can’t Do: Adequately defend opponents who can turn, face, and either shoot or drive. Hit mid-range jumpers. Knock down enough free throws to make him a go-to guy in the endgame. Run the court. Stay healthy!
Must Do: Avoid injuries.
Prognosis: Who knows when/if Bogut will return to action? If all his body parts are properly functioning, he can be a top-notch man-in-the-middle. But his history of major injuries makes his acquisition a huge gamble for Golden State. 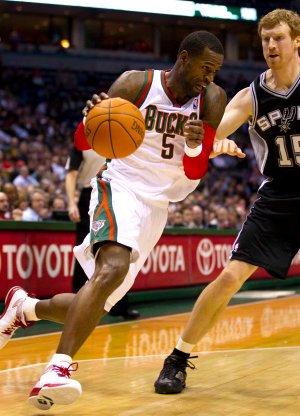 STEPHEN JACKSON TO THE SPURS

Can Do: Hit stand-still jumpers from beyond the arc. His quick release enables him to pull-up with deadly results going right. Because he’s such a streaky shooter, Jackson is capable of single-handedly carrying a team’s offense for short periods and sometimes for entire games. Play defense but only when the spirit moves him.
Can’t Do: Put the ball on the floor under even moderate defensive pressure. Be satisfied when he’s not the focus of the offense and can hoist up at least 20 shots. Avoid influencing young players to look out only for themselves.
Must Do: Cut down on too-quick shots. Play a modicum of defense in a routine basis. Keep his mouth shut.
Prognosis: San Antonio is (and was) the best place for Captain Jack because of the team’s veteran, championship-hardened leadership and Pop’s insistence on discipline. Look for Jackson to immediately get with the program and become an extremely valuable scorer off the bench.

MONTA ELLIS TO THE BUCKS

Can Do: Create his own shots in virtually any circumstance, from in-close and far-out. Score points by the dozen. Excel in an uptempo game plan.
Can’t Do: Play solid positional defense and not rely on risky gambles. Look to make non-assist passes. Accept being anything but the main man.
Must Do: Sublimate his ball-hogging tendencies and allow Brandon Jennings to control the offense. Drastically cut down on his turnovers. Not overreact to Scott Skiles’ overbearing, perfectionist personality.
Prognosis: Ellis and Brandon Jennings can form a potent (if small) backcourt duo whose scoring punch can match any other pair in the league. This deal could easily compel Milwaukee into securing a playoff spot and make them extremely dangerous in the money season.

Can Do: Outmuscle opponents. Drop mid-range jumpers. Grab one rebound for every 4.3 minutes, which is just OK for a center but good for a power forward (which may be his best slot).
Can’t Do: Be comfortable playing the low-post. Be happy as a third or fourth scoring option. Defend opponents away from the basket.
Must Do: Be a leader on a team of terrific athletes who have very little idea of how to play basketball.
Prognosis: Will be thrilled to get more ball-time and will increase the Wizards toughness and belligerence.

Can Do: Run, jump to the moon, rebound, block shots and hit enough mid-range jumpers to be a threat away from the hoop.
Can’t Do: Swallow an Experience Pill and learn the pro game in a hurry. Make consistently proper decisions on defense. Display a wide variety of post-up moves.
Must Do: Be patient with himself and accept Scott Skiles’ criticisms (both positive and negative) with an open mind.
Prognosis: This young man is visibly improving and has a huge upside. If his work ethic remains intact, he could eventually make the Bucks fans forget Bogut. 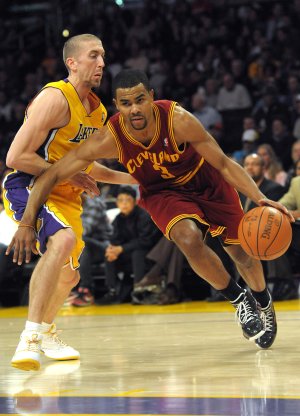 RAMON SESSIONS TO THE LAKERS

Can Do: Score on drives, mid-range jumpers, and in any kind of fastbreak or early-offense situation.
Can’t Do: Run a halfcourt offense. Play more than barely adequate defense.
Must Do: Become much more of a facilitator and look to score only when necessary. Learn to defer to Kobe Bryant and to work with the Lakers' big men.
Prognosis: Will be delighted with his increased daylight and increased responsibility – especially for a team that has semi-legitimate championship hopes. Not to mention the cultural difference between Cleveland and Tinsel Town. A significant plus for the Lakers.

LEANDRINHO BARBOSA TO THE PACERS

Can Do: Run like his pants are on fire. Knock down treys. Be a high-volume scorer off the bench.
Can’t Do: Drive as well from the right wing as he can from the left wing. Discriminate between good and bad shots. Play solid defense.
Must Do: Keep on doing what he does.
Prognosis: Will be a dynamic wing-scorer off the bench whose presence can uptempo the game. A steal!

GERALD WALLACE TO THE NETS

Can Do: Excel in a running game. Zip his way to the rim and finish with aplomb. Play aggressive, quick-footed defense.
Can’t Do: Be a consistent threat from long range (and often even mid-range) because of his wrist-snapping shot release. Operate as a go-to scorer. Be a dependable passer. Always have a discernible presence.
Must Do: Whatever he manages to do will be a big help to this decidedly less-than-mediocre team.
Prognosis: When he’s in the here-and-now, he’ll increase NJ’s quickness and intensity. An excellent pickup, but enough to keep Deron Williams at home?

OTHER FACES IN NEW PLACES

Christian Eyenga  has a world of talent and athleticism, but is sorely lacking in experience. His activity and young legs also qualify him for minimal minutes this season and a huge upside in seasons to come.

Jordan Hill can rebound and play with aggression. He’s a useful fourth big man in the Lakers frontcourt rotation. The addition of Sessions and both of these young men make the Lakers a much better team than they were yesterday.

Sam Young brings tough defense to the Sixers at both wing positions. Moreover his three-point shooting has dramatically improved. A nice role player who won’t be neglected in Philly.

Derek Fisher is a clutch shooter, very good position-defender and a mature in-your-face leader on the court and in the locker room. Back in the day, he was Kobe’s only link to the rest of the team and, despite his inability to defend quick-footed guards, Fisher’s mere presence in Houston will go a long way to increasing the Rockets' intensity and discipline, while focusing they ways in which is new teammates prepare for games.

Richard Jefferson has very little left, so Golden State is an appropriate last resting place for his career.

Marcus Camby can still rebound and block shots but only on an occasional basis. With limited minutes, he can still be valuable in the middle for the Rockets.

Brian Cook is a big man who plays like a guard. Won’t change his game or Washington’s undisciplined game plan.

JaVale McGee can jump, run, dunk and refuse to grow up. Good luck to George Karl and the Nuggets in making him a responsible citizen.

Ronny Turiaf is an undersized, energetic center who’s perpetually injured. He’ll help raise the intensity level of the Nuggets even when he’s cheerleading in civilian clothes.

Nick Young can do little else except score but, man, can he score! A perfect match for the Clippers need to fill the gaping hole left at the big-guard slot by the injury to Chauncey Billups. Another steal of a deal.

The likes of Luke Walton, Jason Kapono, Mehmet Okur, Hasheem Thabeet and Jonny Flynn are prime candidates for buyouts. For most of these guys, their expiring contracts are worth much more than their expiring games.