Kyrie Irving: A No. 1 who has exceeded expectations

Kyrie Irving: A No. 1 who has exceeded expectations 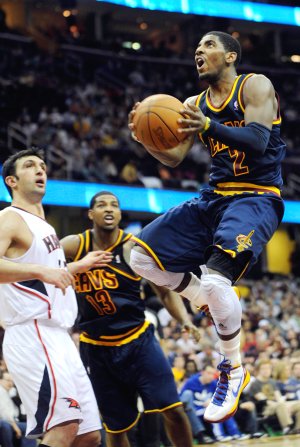 Kyrie Irving laughs, almost anticipating the question, one that the Cleveland Cavaliers point guard hears from city to city.

Both Irving and the Cavs, to a degree have been a pleasant surprise, although the rookie has gained more acclaim than his team.

For the overall No. 1 pick in the NBA draft, Irving had his fair share of skeptics and he keeps hearing how he has surpassed expectations during his rookie season.

“I’ve been dealing with it pretty much all season,” he said.

No longer is Irving being criticized for being the No. 1 selection in what was suggested to be a weak NBA draft.

What’s impressive is how solidly built the 6-foot-3, 191-pound Irving is. He’s been able to take the physical punishment, although as with most rookies, he admits that the travel, the nightly competition against the best players in the world has taken its toll.

Yet the key to Irving has been the confidence in his ability. Even with a breakout year Irving says the confidence meter really hasn’t risen very much.

“I feel pretty much been the same,” he said. “I had the same confidence through my young career, in college and the pros it’s just kind of been the same.”

The Cavaliers expected him to be a top-flight player and the team’s expectations of Irving were greater than the public’s, but even they have been pleasantly surprised at his development.

“He has surpassed our expectations and probably everybody in the basketball world’s expectations,” Cavs coach Byron Scott said.

Irving turned 20 on March 23, but despite his youth, he’s been accepted as the leader of this equally young Cavaliers team.

“He has a maturity level about himself that is totally different than any 19 (20)-year-old I have met,” Scott said.

Irving has actually compiled better statistics as a pro than as a collegian, albeit in an abbreviated Duke career. Due to a toe injury, he played just 11 games last year as a freshman for Duke, averaging 17.5, 4.3 assists and 3.4 rebounds.

Through Cleveland’s first 47 games, of which Irving had played in 43, he was averaging 18.6 points, 5.7 assists and 3.9 rebounds. He’s also averaging 3.2 turnovers, a sign that there is still plenty of work to do.

The Cavs have fared better than expected, although they were not expected to have much success entering the season. Coming off a 19-63 year, Cleveland had won 17 of its first 47 games.

Yet even with the expectations, Irving has hit some expected road bumps, especially recently. Following a 103-85 loss to the Philadelphia 76ers, which was the Cavs fourth consecutive defeat, Irving talked about how teams are adjusting to his game, taking away his ability to drive to the basket. Opponents are now packing the lane, daring Irving and his teammates to score from the perimeter.

“I have played a few games in this league now, so teams have enough film on me to know my strength and weaknesses and they are trying to take it (his driving ability) away,” he said. 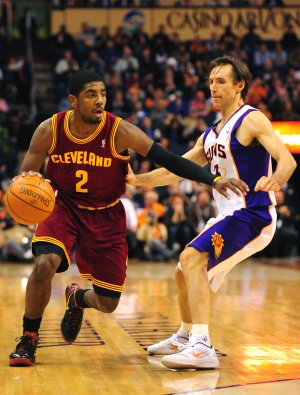 The key to success in the NBA or any league is for the athlete to make necessary adjustments. What appears to be Irving’s best trait is his humility and ability to realistically assess a situation. He understands the league has adjusted to him and now it’s his turn to make the next move.

“Teams are giving me different looks every game,” Irving said. “It’s an adjustment for me, and I am doing the best I can.” The most difficult thing for a young player is to slow the game down. “I’ve got to take my time a little more,” Irving said.

That said, Irving has proven to be the type of player who the Cavs plan to build around. Not only is he the leader on the court but he is also the face of the franchise, the player who the media flock to before and after games.

It’s interesting to compare Irving’s development with that of rookie teammate Tristan Thompson, the No. 4 overall pick in the draft, who played just one season at the University of Texas. Thompson, who turned 21 in March, was averaging 7.6 points and 6.0 rebounds through the Cavs’ first 47 games.

“Tristan has been more like the norm for rookies, having his ups and downs,” Scott said. “You can see he has ability where he will be a good player, but it’s just going to take him longer.”

“Kyrie is one of those rare guys who comes in this league and takes it by storm,” Scott said.

With the Cavs not a fixture on national TV, Irving received major exposure after being named MVP of the Rising Stars game during the All-Star Weekend when he scored 34 points while shooting 12 of 13 from the field and hitting all eight three-point attempts.

“It was a great opportunity with all those young players and on top of that to win the MVP for the city of Cleveland, and my family made that weekend that much more special,” Irving said.

One reason he has maintained such success is that he hasn’t allow it to swell his head. Scott raves about Irving’s work ethic, how he has an insatiable desire to get the most out of his considerable ability.

When one combines Irving’s obvious talent with a high basketball IQ and work ethic and the maturity to handle the considerable attention, it all adds up to why he has exceeded expectations, even for an overall No. 1 selection.