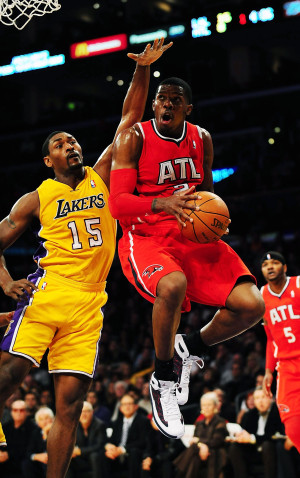 Joe Johnson is keenly aware about the perception of the NBA’s Eastern Conference.

He realizes most of the so-called experts call it a three-horse race with the Chicago Bulls and Miami Heat running neck and neck out front and the Orlando Magic staying within striking distance.

But Johnson contends there’s a certifiable dark-horse in the Eastern Conference playoff race and it’s his own team, the Atlanta Hawks.

“I definitely believe we can win it,’’ Johnson said of the Hawks winning the Eastern Conference championship. “You’ve got to get hot at the right time. Right now, we’re trying to find our groove before the postseason. But we have the talent to do it.’’

Some cynics might scoff at Johnson’s opinion, saying they are biased, and insist the Hawks are merely a good team that will prematurely exit the playoffs. Of course, some of those same doubters probably felt the Hawks were going to do a free fall this season after standout center Al Horford suffered a regular-season ending torn left pectoral against Indiana on Jan. 11.

Without Horford, the Hawks’ Rock of Gibraltar inside, the doubters envisioned the Hawks being a fringe playoff outfit. But the Hawks haven’t only survived, they have thrived. They have won 30 games, a total exceeded only by Chicago (40), Miami (35) and Orlando (32).

The 6-foot-7 Johnson unquestionably deserves a big chunk of the credit for the Hawks’ success.

“He’s certainly our go-to guy,’’ Hawks coach Larry Drew said. “Joe is obviously a terrific player. He is a very, very gifted offensive player, and I think he’s a very gifted defensive player, too. I don’t think he gets the credit he deserves defensively. “But he is a guy, when he’s in a rhythm and groove, who can carry a team. He has that ability.’’

Johnson, who earned his sixth straight trip to the All-Star Game this season, has put the Hawks on his broad shoulders numerous times this season.

In fact, three times in the last week, Johnson channeled his inner Jerry West with clutch shots against Cleveland, Utah and Washington. Johnson coolly made game-tying three-pointers versus the Cavaliers and Jazz and delivered the game-winning trey against the Wizards. In the game against Utah, Johnson wound up scoring 37 points in the Hawks’ exhausting 139-133 four-overtime thriller. He played a whopping 55 minutes.

“One thing a lot of people don’t know about him is that the dude is clutch,’’ McGrady said of Johnson who, on Monday, was accorded Eastern Conference Player of the Weeks honors.

“He’s one of the best clutch players in our league. I’d put him up there with Kobe or whoever you want. “When the game is on the line, he is the one guy we can count on.’’ 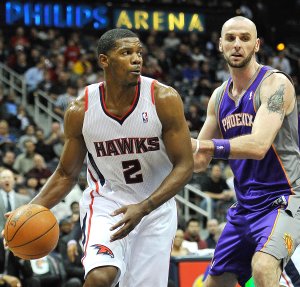 While Drew appreciates having a “closer’’ like Johnson, he’s equally grateful for Johnson taking steps to sacrifice his individual game for the betterment of the team this season.

Drew said Johnson has especially made more of a concerted effort to incorporate his teammates in the action.

“The one thing I see him doing much more different than in the past is his willingness to give up the ball in double-teams,’’ Drew said. “Usually in the past, Joe put it upon himself to carry this team, to lead this team, and would try to beat the double team.

“He has the ability to do that, but there are also times when he can’t do that. He’s had to trust his teammates and that’s what he’s doing now. “Joe has really elevated his game in that area.’’

Johnson’s ability to score from virtually anywhere on the court – he leads the Hawks in scoring at 19.1 points a game – along with his adroit passing skills (3.9 assists a game), make him a nightmare for opponents to stop.

Just ask Sidney Moncrief, once one of the greatest defensive guards in the game who is now an assistant coach for the Milwaukee Bucks. Moncrief, who saw Johnson play in high school in Little Rock, Ark., and was convinced even then that Johnson would become a pro, raves about the completeness of Johnson’s game.

“He can do all the things that elite players do,’’ said Moncrief who, like Johnson, attended the University of Arkansas. “He can shoot the three; he can handle the ball in transition, he can pass and he can make plays down the stretch. “He’s just a very difficult player to stop. He’s a big-time NBA player.’’

And now the 30-year-old Johnson yearns to be called a “champion.’’ While winning the Eastern Conference is his primary goal now, Johnson candidly admits he craves an NBA championship ring … and not just for himself.

“Winning an NBA championship would mean a lot to me,’’ the soft-spoken Johnson said. “I think everyone wants to win a championship. I know I do. But it would also be good for our fans because our franchise has never won one. That would be special. I would love to bring their first championship to them.’’ 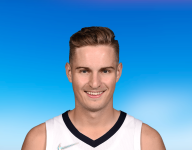 Udonis Haslem non-committal about coming back for 20th season

Kevin Durant likelier to retire than play for the Nets again? 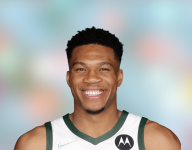 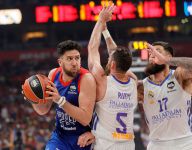