Goran Dragic: "I feel like I was born here"

Goran Dragic: "I feel like I was born here" 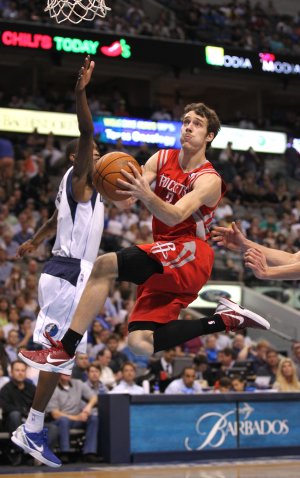 How grueling has this condensed season been for you so far?

GD: It’s tough. It’s a tough season, training camp was shortened. We have, like, four or five games a week and when Kyle (Lowry) got injured, I have to play a lot of minutes. I’m not complaining, but every game is important, especially back-to-back is really important. I just try to get my treatment and try to be fresh for the game.

At any point this season have you felt like you hit a wall and ran out of energy?

GD: Not yet (laughs). But we still got about 12-13 games left. Every day we’re tired, but you just have to fight through that. I have a big heart and I try to play as hard as possible every night. I just want to be positive and finish the season strong.

What has it been like for you to play for coach Kevin McHale?

GD: He’s a great person, great coach, was a hell of a player. He changed our mentality from the start of training camp. He was saying we have to get better on defense and we did that. He’s just a great coach. He lets the players play and make decisions, and gives us that freedom on the court.

How have you taken to the starting playmaker role this season?

GD: It’s great for me, a huge opportunity. If you have more minutes, then maybe you’re not rushing with your shots, you’re waiting on opportunity. I just want to involve all my teammates. If everybody is going to be dangerous on the offense, it’s going to be tough to stop us. So far, we did that, but it’s not over. We still have the eighth or ninth spot (in the Western Conference) battling with three or four teams for the playoffs. We just have to play every night hard try to make the playoffs.

What did you take away from starting your career playing behind Steve Nash in Phoenix?

GD: I saw how he prepares for the game. Every practice he came early, did his treatment, put some shots up. He’s a great guy. We still talk and in 10 days we play against each other again in Houston and it’s going to be a big game. I miss all the guys. I have a lot of friends on that team, but that’s basketball in the NBA, so you never know.

What were your thoughts about Nash’s comment that he would leave the Suns if they did not make moves to get better?

GD: He loves to fight, he’s a competitive person. If they’re not going to bring some players to be stronger and make the playoffs, then I understand him. But still, Steve is a great guy for the Phoenix Suns organization. He’s played a lot of years over there and hopefully he’s going to choose the right way, what his heart wants. He was a two-time MVP and still didn’t get a championship ring, so I wish him to get that, too.

How excited are you about the possibility of going back to the playoffs?

GD: My second year with Phoenix we got to the playoffs and it was really fun. It’s totally different basketball. Everybody plays harder, every possession counts, fans are into the game. A lot of players were in the playoffs here, too. Courtney (Lee), Luis Scola and they know what kind of privilege it is to play. We’re just going to try to make that last push for the playoffs and hopefully we’re going to make it.

After almost four years, how have you adjusted to life in the U.S. and NBA?

GD: Before, I was alone here, now I have a girlfriend. She’s living here with me, so it’s much easier for me. When you have a bad game, you’re not alone, you can talk with somebody. I feel like now I am home, that I was born here in the U.S. I know now a lot things that I didn’t know before.