Stoudemire and Lin are superfluous

Stoudemire and Lin are superfluous 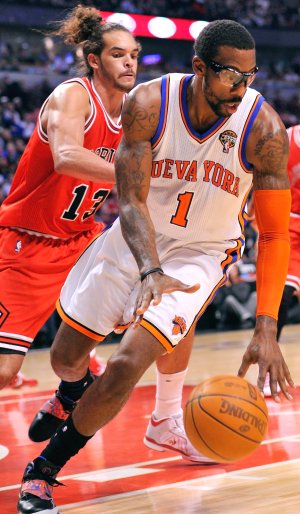 Despite, and because of, the Knicks recent success, the franchise is now facing a pair of critical dilemmas: What to do with Amare Stoudemire and Jeremy Lin, who have both become superfluous in Mike Woodson's game plan that's based on ultra-aggressive defense and Melo-centric offense.

Stoudemire doesn't fit for several reasons. His defense is soft, he's a reluctant passer, he not-so-secretly wants the offense to go through him, and he functions best in a wide-open, quick-hitting offensive philosophy as espoused by Mike D'Antoni.

Moreover, Stoudemire's perpetual injuries have made him incapable of executing the quick and tight spins that made him such a dynamic scorer in his prime. These days, he mostly shoots jumpers or else moves in straight lines.

In addition, Stoudemire's return to the starting lineup would necessarily return Carmelo Anthony to the small forward slot. There are many problems with this move: Anthony is virtually unguardable by opposing power forwards because of his shooting range and his ability to to create off the bounce. On defense, Anthony has the strength and has recently demonstrated the willingness to play more than adequate defense at this position (certainly, at least, better dee than Stoudemire). And in the frontcourt, Melo can rebound and pass rings around Stoudemire.

Moving Anthony would also severely limit the playing time of Landry Fields and Iman Shumpert – two young players who have proven to be indispensable during New York's surge.

Then there's the question of Stoudemire's health. Because of a continuing series of knee, eye, and back ailments, he is also uninsurable. Indeed, the precarious state of his body parts is the primary reason why Phoenix declined to offer Stoudemire the extended contract he desired. Meanwhile, the Knicks are paying him over $18M for the current season and are required to pony up another $65M for the next three seasons.

All of these considerations make Stoudemire literally untradeable.

So what are the viable options?

There's only one: Maintain the current starting lineup and have Stoudemire come off the bench where he could function as the second unit's featured frontcourt scorer. Hey, if being a sub is good enough for the likes of Manu Ginobili, James Harden, Jason Terry and Zach Randolph, then Stoudemire should have no grounds for complaint. But complain he will.

For sure, he would then represent a waste of a starter's salary, but there doesn't seem to be any other reasonable alternative. 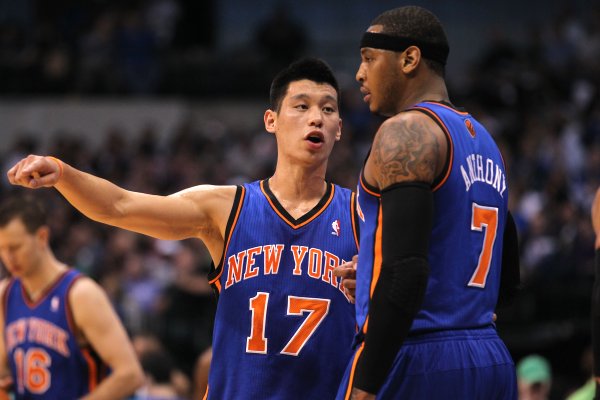 Lin's situation is not nearly as pressing since he most likely is out for the season. Even so, during his second circuit of the league, opponents limited his effectiveness by attacking his slow-footed defense, overplaying his right hand, cashing in on his tendency to force passes while aloft, and by pressuring his too-high handle. For sure, he has a high basketball IQ, is admirably unselfish, and can bag enough stand-still treys to prevent defenses from ignoring him. Yet Lin, like Stoudemire, is better equipped to succeed in a D'Antoni-esque offense than in Woodson's more deliberate style that puts a premium on isolations.

While Baron Davis's part-time play at the point is still a plus, it's also clear that he's rapidly nearing the end of his career. However, it's just as evident that New York's point guard of the future could very well be Shumpert. This supremely talented rookie is a stopper on defense, can drive and finish, and is also a dangerous perimeter shooter. That said, his sometimes questionable decision-making and ill-advised shots are merely the sins of a stranger in paradise and will ultimately be corrected as he gains more experience.

At the same time, Toney Douglas is another youngster with a dynamic upside who's also learning how to run an offense.

Where might that leave Lin? A third- or at best a second-string player. Indeed, the consensus among NBA scouts and perceptive hoop-o-philes is that Lin's rightful place is backing up the trigger position.

Meanwhile, Lin will be a free agent come July and will surely be in line for a significant raise from the $762,195 he's currently earning. Should the Knicks sign him to a long-term deal and give up on Douglas? Or arrange a sign-and-trade scenario that sends Lin elsewhere? Neither of these possibilities seem to be sound basketball decisions, yet not signing Lin would be an enormous public relations blunder for New York, especially given the local and universal hoopla over Linsanity.

The guess here is that Douglas will be relegated to the bench as the fourth guard behind Shumpert, Fields and Lin. And that Lin will find a way to survive behind Shumpert in the rehired Woodson's halfcourt offense.

In any event, the short- and long-term destinies of the Knicks will continue to be fascinating.