Doomed after lousy performance in Miami

Doomed after lousy performance in Miami 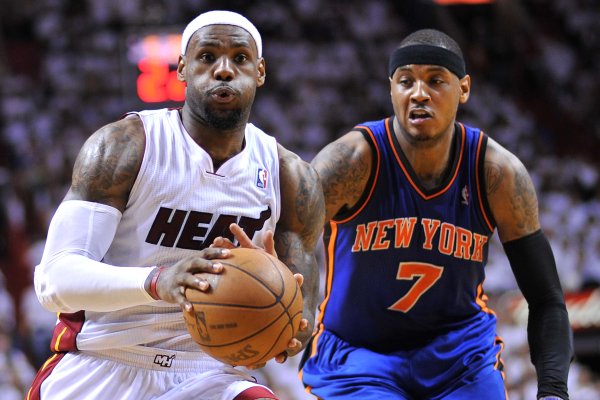 The truth is that the outcome of the Knicks-Heat series was decided when Miami devastated New York in the first game. And, despite their public protestations to the contrary, both teams know this.

In Game 1, the ferocious and relentless fronting of Carmelo Anthony completely discombobulated the Knicks and Mike Woodson was unable to devise any in-game adjustments to counter this. Indeed, “Iso Mike” was reluctant (unable?) to come up with any other offensive game plan. All we saw was 'Melo repeatedly rooted to a spot on a wing or in the low-post and wrestling with either LeBron James or Shane Battier to establish acceptable position. If lob passes were in order, they were mostly over- or under-thrown. Besides, the Heat's frontcourt players provided plenty of baseline help.

No wonder Anthony shot an embarrassing 3-for-15.

'Melo was equally as inept at the other end of the court – failing to throw his hand at nearby shots, not busting to get back in transition, giving up on plays when he was beaten off the dribble.

Amare Stoudemire wasn't much better – shooting 2-7, stumbling around on offense, and disappearing on defense.

While the Knicks offense was stagnant and predictable, Miami was whipping the ball around the perimeter, making perpetual dive cuts, and always looking to make the extra pass. On defense, the Heat challenged every pass and every catch, a tactic that unnerved the already shaky Knicks. The 34 points Miami scored off turnovers were mainly responsible for their 33-point margin of victory.

If the Heat brought their A-game, the Knicks were spectacularly unprepared (and so, by the way, were the refs). It was to be expected, then, that come Game 2 Miami would be overconfident, the Knicks would have their chops up, and the Woodson would institute effective adjustments.

These expectations were only partially realized.

On several early plays, Anthony was supposed to cut to the rim, set a screen, then curl back to the top off an elbow screen. But he failed to make contact with the erstwhile screenees he was supposed to bang (or, in NBA parlance, he failed to “head-hunt”), then he ran wide circles around tfhe proffered elbow screens. Simply put, Anthony doesn't like to move without the ball, so the screen-the-screener plays flopped.

A slightly more effective tactic was to either have Anthony carry the ball across the time-line or else receive the rock (and initiate his offense) in the middle of the court about 30-feet from the basket. This prevented Miami from fronting him and denying him the ball simply because there was too much open space for Anthony to simply make sharp cuts into the lane. Working against single coverage for most of the first half, Anthony had little difficulty creating makeable shots – shooting 9-for-18.

But then the Heat made savvy counter-adjustments after the intermission. Even though Anthony was so far from the goal, Miami (Battier in particular) reverted to their fronting, ball-denial mode. To keep Anthony from simply diving hoopward, the Heat's bigs were ready, willing, and able to clog the middle.

Next, the Knicks had either Stoudemire or Tyson Chandler set high screens for Anthony. A couple of alert rolls led to dunkers, but then the Heat started loosely doubling 'Melo, effectively forcing him to veer even farther away from the basket and denying him the vision and the time to make accurate penetrating passes.
In the second half, Anthony managed only eight shots, converting three (which matched the total number of airballs he launched). And the offense became increasingly stagnant as the second half proceeded.

Elsewhere, Stoudemire hit a few jumpers but was never a factor on offense. Even worse, his defense was pathetic and he was beaten to several rebounds. He did exhibit some passion in the locker room after the game when he tried to KO the glass enclosure of a wall-mounted fire extinguisher. (It was the fire extinguisher by a TKO).

JR Smith proved incapable of handling the ball even in light traffic and failed to score when the game was close.

Chandler was feeling better in his continuing battle with the flu, and was therefore more active right out of the gate. But he understandably ran out of gas.

The Knicks certainly missed the aggressive defense and all-around athleticism of Iman Shumpert. With the dynamic rookie out with a torn ACL, Dwyane Wade had his way with Landry Fields, Steve Novak, and whomever.

Yet New York still committed numerous unforgivable errors on defense – from turned heads to failing to stop the ball when the Heat were on the run, to neglecting to tag Mike Miller when rotating toward lane penetration.

So, Woodson's adjustments were minimal and largely ineffective. What was needed was to have Anthony play like Richard Hamilton – run off multiple combinations of weakside screens, run baseline snakes, curl and back-cut, set sturdy screens and then pop. Too bad Anthony only wants to move crisply with the ball in his hands, and Woodson's Xs and Os are writ in lower-case.

As for Miami… They were indeed overconfident coming into Game 2. Their baseline rotations were often lax and they were frequently too careless with the ball.

As in Game 1, Chris Bosh wasn't much of a factor. All told, he and Amare just about canceled out each either. Udonis Haslem missed several mid-range jumpers that he can usually make with his eyes closed.

If the Knicks brought their B-game into Game 2, the Heat seldom revived their defensive intensity and played at a C-level. Which was good enough to control the game from tip-to-buzzer. 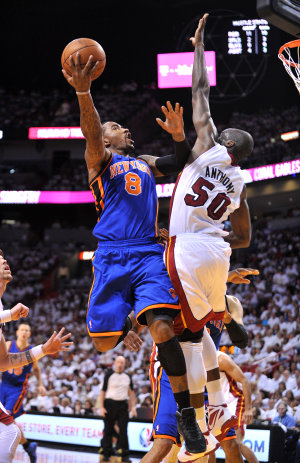 Stoudemire's absence might be something of a blessing in disguise. Now the short-handed Knicks will be forced to put Anthony at the power-forward slot, which does make fronting him easier, but also vacates the paint. With Landry Fields and Smith manning the wings, jamming the shadow of the basket to discourage lobs to 'Melo will leave one of these three-point marksmen open. (Can Smith respond to the emergency and be the potent scorer he sometimes is?)

Also, asking the light-weight, defensive-challenged Bosh to defend Anthony is another risky business.

Plus, Anthony at the 4-position rebounds better than Stoudemire and plays more earnest defense than he does at small forward.

Of course, the Knicks bench will be woefully short. Josh Harrellson will back up Chandler, to take up space, hit some jays, and play better than expected. Dan Gadzuric might make his debut. Also look for Toney Douglas to get some daylight in the frontcourt.

The Heat meanwhile have to be smelling the copiously flowing blood of a seriously wounded opponent. If their killer instinct does not kick in in Game 3, perhaps it never will.

In other words, while the outcome of the series is no longer in doubt, Game 3 has significant resonance for both teams.